Away from the steady stream of COVID-related articles, the world keeps turning. Our focus this week is on the news from the far-East, centring on trade. Fifteen major economies from across Asia and the Pacific have signed the most significant multilateral trading accord over the last few years; the Regional Comprehensive Economic Partnership (RCEP).

We look at the significance of this new accord, what it means for the incoming Biden administration and potential benefits for the UK to come.

It has taken a decade to conclude the RCEP negotiations, unsurprising given the divergences between its fifteen members. The agreement has much that is material and some symbolic aspects.

Firstly, the fifteen national signatories encompass nearly one-third of the world’s population and gross domestic product (GDP), making it the largest regional free trade agreement. The combined GDP of its members equates to $25.8 trillion, more extensive than both the North America United States-Mexica-Canada Agreement and the European Economic Area. The eastward drift of the global economic centre of gravity is further underlined by the fact that this deal extends to 2.2 billion people.

Secondly, the RCEP represents the first trade agreement to bind together three historical rivals; China, Japan and South Korea. They are the three largest economies in the RCEP, but the sheer economic weight of China dwarfs the other, whose economy is nearly three times as large as second-placed Japan.

Graph 1: The five largest economies of the RCEP (in Billions of USD) 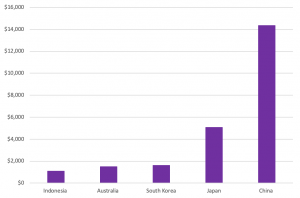 Finally, two notable Asia-Pacific powers are conspicuously absent from the party: India, the third-largest Asian economy with a GDP of $2.94 trillion in nominal terms. India’s government declined to sign the compact over fears that opening the country’s domestic markets to foreign competition would kill-off politically sensitive, nascent industries. However, the door remains open for India to join later.

More significantly, the other Pacific superpower, the United States is also absent. US influence in the region has diminished after the Trump administration decided not to join the Trans-Pacific Partnership (TPP). The Obama administration negotiated the TPP as part of an attempted strategic pivot to Asia. Trump hated the deal because he thought it was bad for US manufacturing jobs. The design of the TPP sought to liberalise trade between 12 countries, but expressly excluded China.

How the US reacts to the deepening of trade links between some of its most important regional allies will determine whether the blow dealt to US’ pre-eminent Pacific role by the new agreement is fatal.

The symbolism of the RCEP is clear to see. It shows China in a good light and leaves the US in the dark, with even less influence in a growing area.

For members, the consequential economic benefits will act as a timely accelerant for economic growth with many of the regional economies enjoying a speedier recovery from COVID-19.

The agreement is broad with some attractive headline term including:

The export-oriented nature of the Japanese and South Korean economies means they are unsurprisingly projected as the largest beneficiaries of the deal. However, the benefits of liberalised trade will not just accrue to the 15 signatories. Estimates suggest the agreement will boost global GDP by $200 billion annually, and cheaper goods will ultimately flow to developed markets and western consumers.

Many commentators are wondering if the RCEP agreement may spur the incoming Biden administration to break from the trade-sceptic policy of his predecessor. The most obvious solution would be to dust-off the Obama-era plans and join the 11 strong Comprehensive and Progressive Trans-Pacific Partnership (CPTPP); the successor to the original TPP.

Throughout the presidential campaign, Biden repeatedly cited his desire for America to reassert American global leadership and return to diplomatic ‘normalcy’. To compete effectively with China, they must gain some traction through cooperation with other countries and allies in Asia.

After four years of Trumpian scepticism of free trade, it is unclear whether such a strategy is politically viable. If accomplished, the US re-entry would mark a return to multilateral trade, after at least twenty years of regression.

From a UK perspective what Biden does next in this area is important, as the government is targeting membership of the CPTPP as a crucial part of its post-Brexit trade policy. US participation in CPTPP could expand UK businesses’ access to the world’s largest economy and 11 other nations. A big prize.

Competition between the US and China could ultimately pay dividends. It may encourage the US to join the CTPP and competing trade blocks (RCEP and CTPP) may deliver lower prices of goods and service to benefit consumers.

The UK stands to benefit if it accedes to the CPTPP and will be further enhanced if the US re-joins under Biden.