On Wednesday, Prime Minister, Theresa May signed a letter which invokes Article 50, the divorce papers between the UK and the European Union (EU). A two-year period of official Brexit negotiations with the EU will now begin.

In respect of the referendum, the UK government has set out certain key objectives. The key elements of which are control over UK law making and control over immigration flowing from the EU to the UK. Reconciling these desired outcomes with freedom to trade across the EU without barriers or penalties is likely to be a complex process. In the end both parties have something to lose if diplomacy fails to deliver a negotiated settlement.

Markets reacted calmly following the formal notification to trigger Article 50. Since the referendum last summer, sterling has fallen approximately 15%. This has been especially beneficial to UK investors invested into overseas assets like international equities and bonds. It has also enhanced UK equity returns (FTSE 100 rising by 15%), with investors realising that for those companies with large overseas operations a windfall occurs when foreign dominated currency earnings are translated back into sterling profits.

The EU referendum result had an immediate impact on bond yields, with 10 Year gilt yields falling sharply and bottoming out at 0.5% after some investors downgraded their assessment of the UK’s creditworthiness, ahead of the negotiations with the EU. Following the fall in sterling and higher oil prices investors anticipated a rise in inflation. This knocks-onto investors, who are more inclined to sell bonds causing prices to fall and yields to rise.

This is a historic moment for both the UK and EU. The direction of travel is now clear but the destination is as yet still to be agreed. 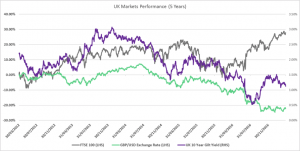 Last week, it was announced that Donald Trump’s first major legislative effort involving a bill which would repeal the 2010 Affordable Care Act, also known as Obamacare, failed to be approved. The bill went to a vote in Congress and fell short of the 216 votes it needed. Trump blamed the Democrats despite his party, the Republican’s, controlling the House.

What Did the Bill Entail?

Following the announcement of Trump’s defeat the US dollar fell 0.4% with developed stock markets also marginally falling but recovered to positive territory by the end of business on Tuesday. The price of gold improved slightly rising by 0.9%. The precious metal is now at $1,259 an ounce. Year-to-date gold has increased in value by 8.9% in US dollars, which in some ways is quite sanguine given the backdrop of persistent and under estimated political change that has taken place over the same period.

Expressions of doubt over Trump’s ability to implement his full economic agenda have undoubtedly increased, but US consumer confidence (Conference Board Index) remains high. Strong consumer spending feeds into US GDP, revised up on Thursday to 2.1% for Q4.

The one certainty is a ramping up in political activity and rhetoric to galvanise the growth agenda that Trump seeks to attain with his Presidency.