A tale of interest, inflation and ultimately growth

Following the global financial crisis in 2008, the decision was made by central banks to loosen monetary policies and to cut interest rates to historically low levels. Some central banks went as far as adopting negative rates, a venture into new territory.

Policy was a two-fold initiative, first to incentivise and spur consumer spending and second to reduce the cost of borrowing. The latter being designed to increase the rate of investment, with the ultimate intention of spurring economic growth.

In the US, interest rates remained firmly at 0.25% until 2015. Thereafter, the Federal Reserve (Fed) began to steadily raise interest rates, giving us eight, 0.25% increases, including the rate increase on Wednesday. Interest rates now sit within a range of 2% to 2.5%.

This new range is important because it surpasses the Fed’s preferred inflation measure, PCE (Personal Consumer Expenditure Index), of 2%. It is the first time since before the 2008 financial crash that interest rates have turned positive in real (inflation-adjusted) terms.

If we project forward, using the Fed’s indicated pathway for interest rates, we can see that in real terms policy is getting a little tighter. However, the rate remains below the growth trajectory of the economy which is expanding by more than 3%. 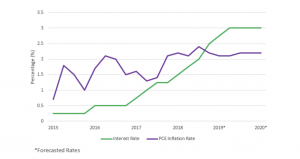 This slight tightening of monetary policy is a natural response to improvements in US economic growth which accelerated in the prior year and is now self-sustaining. Growth is no longer reliant on central bank support.

We conclude that the Fed are signalling increasing confidence in the economic recovery. They do not see it being derailed by the upward shift, the current tightening cycle nor the trade wars underway.

Of course, this is an ongoing journey. A journey subject to much discussion and requiring keen judgement. The Fed are not intent on causing a recession to stop an over-heating economy. They are keen, we suspect, to maintain growth for as long as possible. In doing so they are offering a stronger economy, for longer, so measures to help bear down on exceedingly large US spending and trade deficits can be given time to work.

A reshuffling of the tech chairs…

Underlying shifts in industry prospects are reflected and captured by investors through the stock market. For example, if we think back to the late 1990’s and early 2000’s we had what was described then as the TMT- Technology, Media & Telecommunications – boom. This is also referred to as the internet boom or dot com bubble.

At that time many stocks in the TMT sectors were soaring to stratospheric valuation price and levels, in some instances without any track record of turning a profit. However, as the TMT theme gained more and more recognition, accounting for almost 40% of the index, investors felt more compelled to follow the trend. As we know, this turned into a well-documented TMT sector bust and, along with other associated effects, resulted in a generalised economic downturn. Technology sector price earnings (PE) valuations hit 60x earnings back in March 2000 compared to 23x today e.g. the higher the sector PE the higher the expectation that companies within the sector will produce superior profits into the future. 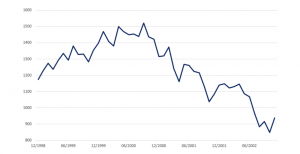 The objectives thought possible in the internet boom years took longer to deliver than originally envisaged, but some would say these expectations have since been exceeded. The emergence of technological change, dreamt of as life changing, has given us smart phones, tablets and watches as communication devices, to name but a few everyday items which we take for granted.

New innovations brought to us through technology

Over the last 18 years, companies taking advantage of technological advances have been able to create entirely new and exciting businesses or have used technology platforming to replace labour (workers) with computers and learning machines; delivering increased productive capacity. Efficiencies uncovered have helped drive and improve corporate margins: Who would have thought that self-service checkouts at supermarkets would replace people! Technology and productivity gains have in turn justified higher corporate valuations in the stock market, with positive effects spilling out to the real economy.

Recently, index providers, like Standard and Poors (S&P) in the US, perhaps mindful of the concentration effect from some high flying ‘technology’ stocks, decided to rebalance sector compositions across their flagship S&P 500 index. They shifted 27 stocks from the Technology, Consumer Discretionary and Telecommunications sectors, including Alphabet (Google) and Facebook, into a new super-charged ‘communications’ sector.

It is interesting that the technology sector, before the rebalance, accounted for more than 25% of the index, not reaching the peak of 29% back in 1999. The rebalance drops the sector weight to 20% and perhaps heads off the possibility of criticism in future years that the mistakes of the internet years were repeated.

It is difficult to articulate, or judge, how index changes impact the real economy, if at all. At one level it is simply a reshuffling of the deck chairs. Passive investors must buy ‘the market’, regardless of sector classifications. However, there is another angle. Active ‘value’ investors may find themselves looking at the new expanded telecoms sector, formerly boring, in a different way now that it is redefined as ‘communications’.

Previously, the telecoms sector was the domain of traditional industry and so called defensive companies. However, it will now include many more high-flying companies like Facebook and Alphabet; formerly classified as tech. Comparative PE valuations within the sector will now look very different i.e. one traditional telecom company (Verizon on a 13x earnings multiple) compared to another (AT&T on 12x) will result in one looking slightly cheaper than the other, but when these valuations are compared against Facebook (24x) or Alphabet (31x), traditional PE company valuation metrics may start to look egregiously undervalued. If so, the so called ‘cheap’ companies may, at the margin, start to attract additional investor capital.

If this happens it may be misguided. An index when it redistributes company classifications cannot enact lasting economic change. More capital attracted into perceived ‘cheaply’ valued companies, that subsequently turns out to be ex-growth or even redundant in future years, will be wasted. A change to sector classifications, by index compilers like Standard and Poors, cannot revive old business models if they turn out be obsolete.

The future, as it unfolds, once again offers unlimited opportunity. This is not determined by index compliers, but by innovators. Today we speculate about driverless cars, airborne taxis, fiendishly clever algorithms and robots booted with artificial intelligence. Who knows what comes next ..….