Last week the House of Commons voted to hold a General Election on the 12th of December. We have assessed the policies of the three national parties and examine what their policies indicate for Brexit and beyond.

Last week, Prime Minister Boris Johnson obtained an early Christmas present with the news that the House of Commons finally acquiesced to his request for a General Election, due to take place on the 12th of December.

The primary battleground for each party will be their respective positions on Brexit. Whether the result of this election will present sorely needed clarity on the UK’s future relationship with Europe remains to be seen. Given the shocks and upsets of recent elections nothing can be taken for granted, but at this juncture it is worth examining the policies of the three national political parties; the Conservative Party, the Labour Party and the Liberal Democrats.

First, we look at the reactions of markets before and after previous UK elections.

General election campaigns are by their nature uncertain periods. Would-be governments seek to implement policies which could be a fundamental departure from those of the incumbent parties. Additionally, in more recent elections the final outcome has been much less certain, as political allegiances of voters are much more fluid and unpredictable than in the past.

This uncertainty is reflected in the oscillating movements of the UK’s primary equity market index during election campaigns and their aftermath. For instance, the chart below shows the daily price change of the UK’s leading index, during the 2015 General Election and its aftermath. We can see the rapid spike that accompanied the day of the election’s results, when the market jumped by 2.32% in a single day,

Chart 1: Daily Movements of the Leading UK Equity Index during the 2015 General Election. 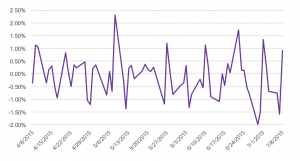 It should be noted the performance of these markets will not be subject to the result of any election alone. Other, global factors will also have a bearing on the performance of equity markets, but election results are possibly a useful gauge in assessing the immediate reactions of investors to prospective policies. The upcoming election will be no different and we examine the policies below.

It will come as no surprise that the Conservative’s Brexit policy is to pass Boris Johnson’s Withdrawal Agreement Bill and, in their own words, “get Brexit done”. Polling data seems to indicate that the Conservatives have opened up a significant lead over their rivals. Whether this will translate to a much-coveted outright majority remains to be seen, not least because of the threat posed by Nigel Farage’s Brexit Party ‘splitting the vote’ of Brexit-backing voters, who would otherwise support the Conservatives

Labour’s Brexit policy seems to lack the coherence of the other national parties. Should Jeremy Corbyn win a majority on December the 12th, Labour policy is to renegotiate the terms of the UK’s withdrawal from the European Union, put any renegotiated deal to a referendum alongside an option to remain in the European Union. They would subsequently campaign to remain in the EU.

The policy reflects the differences within the party. Many Labour constituencies voted to leave the European Union in 2016, despite the views of their MPs, most of whom backed Remain. To differentiate a Labour Brexit from the current terms of Withdrawal Agreement Bill, the Party have focussed on establishing a new EU-UK customs union.

The Liberal Democrats have long been the British political party most amenable to greater UK participation within the European Union. In that vein, leader Jo Swinson seems to have pivoted away from the idea of a second referendum and has pledged to revoke Article 50, if the Liberal Democrats win an outright majority at the election. Recent polling data indicates this will be an unlikely outcome, but the party remain open to working with other parties to prevent a Conservative majority and could support Labour’s idea of a second referendum.

At this point it is too early to forecast how the December election will develop. Election campaigns and the prospects of their protagonists tend to fluctuate, and outcomes are uncertain. The third general election in four and a half years is reflective of wider political uncertainty which has characterised elections in many democratic countries globally.

Although the overall outcome is yet to be decided, market participants did react positively to the news of the election. The theory is that the outcome of the election will allow for greater clarity on how Brexit will develop, whether a ‘hard’ or ‘soft’ outcome. This was reflected in currency markets, with the value of sterling gaining sharply following the announcement of election

Chart 2: Sterling Exchange rate vs US Dollar and Euro

Source: Bloomberg. Data as of November 2019.

Whilst, this rise is welcome, expect further twists ahead as the fortunes of each party rise and fall. However, a global marketplace helps to insulate investors from local political considerations. At True Potential, we build on this fact by utilising multi-asset strategies, bringing enhanced diversification and mitigating the effects of localised political and economic uncertainty.