Chancellor of the Exchequer Rishi Sunak has confirmed that his post-lockdown Autumn Budget will take place later this month on the 27th of October. The backdrop could hardly be more challenging – messy public finances, supply bottlenecks, shenanigans in the energy market and rising prices. This budget represents a big test for Rishi Sunak who through the pandemic has shown himself to be capable. Thus far he has swept aside accusations that he is reneging on party pledges while focusing on the need to manage public finances carefully.

Sunak is expected to impose a package of ‘manifesto-busting’ tax increases at this month’s budget. This is awkward politically in the face of Conservative plans around levelling up, The Institute for Fiscal Studies (IFS) also predicts cuts to Government departments worth up to £2bn, giving plenty of ammunition for the opposition to shout about austerity. Presently choices when it comes to raising taxes and cutting spending are unpalatable.

The expected tax increases will push the UK’s overall tax burden to the highest level in peacetime; an expansion of c.£140bn in the state, and the highest level of government spending since the 1980’s. Sunak, in an attempt to ease Tory MP’s concerns of such tax hikes, voiced his view that it will open the door to future tax cuts prior to the next general election: Pain now, relief later. Whether this is politically astute or wishful thinking will be determined in the years to come.

Cuts though will most hit areas like education, local government spending and prisons imminently. Budgets in these sectors were cut substantially in the 2010’s and unlikely to escape further cuts in the 2020’s. The difficulty for the government is that such cuts are unpopular, particularly with ‘red wall’ MP’s, and provide ammunition for the opposition.

Tax increases, recently rumored, in corporation tax, and most controversially announced in national insurance contributions, are expected to generate an extra £42bn per year. But these measures merely shore up public finances. The UK’s national debt is expected to sit at around 90% of national income; 17 percentage points higher than pre covid levels.

Sunak reminded his party that national debt also stands at 100% of gross domestic product (GDP). The graph below charts the path of debt as a percentage of national income and compares it to forecasts made in the Spring budgets of 2020 and 2021. 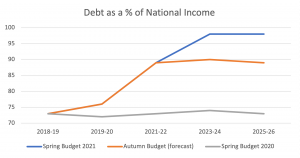 Sunak has set out his view that excessive public borrowing is fundamentally ‘immoral’. New fiscal rules that may be unveiled will call for day-to-day government spending to be fully funded from income, eliminating the need for borrowing. The IFS has said the deficit (shortfall between state spending and income) for the current financial year will be approximately £180bn. A big figure yes, but better than the forecast of £240bn made in spring. If all goes to plan, a big if, the government will have a budget surplus on day-to-day spending by 2024. 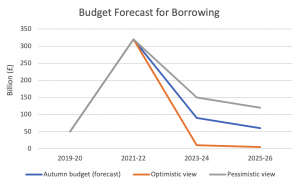 With finances stretched it is not surprising that tensions between ministers and the Chancellor are high. This became evident with the spat between the Business Secretary Kwasi Kwarteng and Sunak over bailouts for UK companies struggling with higher energy costs. Sunak’s tough stance means proposals put forward to the Treasury in the form of state subsidies or loan schemes will likely be resisted.

Ministers are however, calling for cost containment on gas, electricity and carbon prices to ensure factories continue to remain solvent, especially during the coldest months when further price spikes could emerge. If prices remain high, and viable solutions not found, grumbles will escalate. The market supply and demand fundamentals will ultimately come back into balance, but not necessarily in a politically expedient way.

What Else Can We Expect To See?

A 5.7% rise in minimum wage to £9.42 an hour for those over the age of 23- Possible and fits the rhetoric of higher wages being bandied around by the PM.

Student loan repayment threshold amended lowering the earnings level from £27,295 to around £23,000 (will save the Treasury up to £2bn annually). Very likely.

A Household Support Fund to mitigate the removal of the £20 addition to Universal Credit brought in during the pandemic. Something needs to be done to avoid being labelled uncaring.

Sunak is expected to use his budget to set out new fiscal rules to constrain spending, with the hope to balance the budget for day-to-day spending by the end of the Parliament. This will ensure underlying debt starts falling by 2024-25.

Sunak will resist pleas for bailouts in industry and will stand firm on tighter public spending.

The most significant taxation changes have already been announced but when it comes to budgets, expect the unexpected.