A Sleight of Hand?

Home Our BlogA Sleight of Hand?
Share this page

Last month, we provided a note detailing implacable splits between the member states of the European Union on the design of a financial aid package to cushion the impact of COVID-19 on the worst economies.

Old wounds between the relatively more prosperous northern states and their indebted southern neighbours reopened. The cause of the acrimony was a call from the Netherlands and other northern states to make fiscal and economic reform mandatory, adding conditionality to any new financial aid for Italy and Spain.

To break the deadlock a new approach is required, and on Monday of this week, President Macron of France and German Chancellor Angela Merkel joined forces to announce a new proposal.

While lower than the one trillion-euro stimulus injection canvassed for by some European leaders, the sum is still three times larger than the EU’s annual budget and will go some way to dealing with the economic pain associated with Covid-19.

The core of the Recovery Fund enables the European Commission to borrow the money on behalf of the EU member states from 2021. The Fund represents an additional source of funds in on top of the one trillion-euro EU budget agreed for the years 2021 – 2027. It also leverages the ability of the EU institutions to borrow money at exceptionally low-interest rates.

Accordingly, any debt servicing required will be paid by members states’ contributions to the EU budget, based on their share of the regular EU budget. By channelling new money through the EU budget, the Commission will obtain the power to deploy the funds to those regions and sectors that have been impacted the hardest by Covid-19. Therefore, there will be net contributors, and the plan represents a partial fiscal transfer from the more financially secure northern member states, to the south.

Crucially, unlike previous measures and representing a considerable concession from Germany, any new funds allocated under the plan will take the form of grants, not loans. For heavily indebted countries like Italy and Greece, structuring the monies as grants alleviates pressures on beleaguered public finances.

Several southern member states have already implemented domestic stimulus programmes. However, countries such as Italy and Greece, possess mountainous debt piles that exceed the value of their annual Gross Domestic Product, as contrasted with Germany’s debt profile in Graph 1 below. Therefore, their ability to raise enough finance to support their economies until a recovery ensues is limited.

Graph 1: Percentage of Debt to GDP of Italy, Greece and Germany. 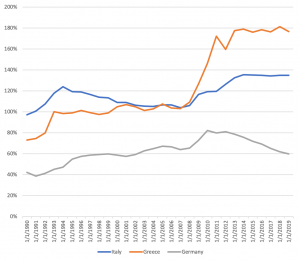 The plan proposed on Monday aims to correct for this fact, by keeping any additional loans off the balance sheets of the most affected countries; essentially pooling the creditworthiness of the EU overall. Additionally, the proposal seeks to prevent the emergence of a two-speed recovery across the region. Officials fear a narrowly led recovery would further cement the economic disparity between northern and southern members states and undermine the overall cohesion of the EU.

The immediate market reaction to the proposal was positive. Graph 2 below depicts the movement of Italian bond yields following the announcement. Falling yields indicate rising bond prices and in this instance, increased investor demand based on a perceived lowering of risk. 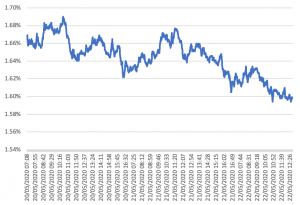 As can be seen above, the Italian 10-year yield have dropped below 1.60%, reaching its lowest level since early April.

As the leaders of the EU’s two largest economies, agreements between French Presidents and German Chancellors usually create the conditions for further integration, always under the banner of ‘More Europe’. However, once resolute EU cohesion is undermined by a lack of willingness to embrace fiscal integration, which has lagged monetary integration.

For the plan to be implemented, unanimous approval for a form of fiscal transfer from the 27 member states is required. The greatest obstacles to acceptance are (yet again) the reservations of the Netherlands, Denmark, Sweden and Austria; the Frugal Four.

Shortly after the proposal’s announcement, Austrian Chancellor Sebastian Kurz reiterated his government’s view that loans rather than grants should form the basis of any pan-European stimulus programme.

Additionally, despite Germany expressly stating the additional 500-billion-euro boost will be a one-off occurrence, other member states are sceptical. Because the plan announced on Monday effectively endorses common borrowing and direct cash disbursements, the Frugal Four fear it is merely the first step towards a common European fiscal policy. The result would be permanent fiscal subsidies from north to south, without placing any requirement upon recipients for economic reform.

The frugal four are themselves working on a counterproposal based around loans rather than grants. However, unless the terms of the loans are incredibly generous, they will likely not gain acceptance from Spain and Italy.

Monday’s proposal and the reaction to it underlines the contentiousness of any pooling of any EU expenditure and debt management.

Measures under consideration, least of all by Germany, emphasise the widening economic disparities between the 27 member states.

However, at its heart, the European Union is a political project. The desire of most member states to ensure European cohesion is maintained will outweigh the obstinance of the frugal four.