Beyond the Headlines – A global view of the UK Budget, US Earnings and Germany’s Leadership

Home Our BlogBeyond the Headlines – A global view of the UK Budget, US Earnings and Germany’s Leadership
Share this page

In this week’s economic update, we take a brief look at three distinct geographies and market occurrences. Firstly, we digest the third quarter earnings results coming out of the US and establish their significance. Secondly, Chancellor Hammond’s extensive budget speech is summarised and evaluated to identify the key points, before we take a brief historical look at the impact Germany’s Chancellor, Angela Merkel, has had on the economy following her annoucement to step down in 2021.

Throughout the year we have kept you up to date with the results of US corporate earnings; also referred to as quarterly earnings.

Analysts eagerly await corporate result figures as they act as a barometer of corporate health. So far, in 2018, the reports have been staggeringly good, with firms generally reporting continuous ‘beats’; results that exceed market expectations. Despite the recent turmoil in stock markets the rising profits being reported are helping to build a stronger earnings base that should ultimately underpin confidence.

As a brief recap the catalyst for improved financial health has been a pro-business agenda championed by President Trump. He is no stranger to the corporate world and understands that enterprise is important for a healthy economy. His interventions are directed at allowing business to grow. The most prominent example of his intervention is the generous $1.5 trillion worth of tax cuts benefiting corporates and individuals’ personal incomes.

The update we have for quarter three results, thus far, is that 306 out of 373 firms reporting their results have beaten expectations. When we last discussed the forecast outlook analysts expected quarter three earnings growth to be around 19.2%. The growth rate today is currently 23.62%; shown by the green bar in the chart below. Analysts are now suggesting that growth in earnings could rise to 26.30% after all 500 firms have reported and the numbers aggregated. This is represented by the orange bar in the chart below.

One of the factors leading to favourable results is increased sales. Revenues are up 8.21% for the quarter, primarily driven by companies in the energy (largely a function of oil prices), telecoms and real estate sectors.

As you might expect the growth trajectory underway in company earnings must slow. The accelerated tax fuelled pace we are seeing is not sustainable. Timing the tipping point precisely is not possible, but earnings should start to slow next quarter and into 2019, but this is not bad news because we are talking about a slowing rate of growth – which is still growth!

The press, and media generally, have now dissected and commented on every aspect of Phillip Hammond’s fifth budget.  As such we thought we would focus on the main components of his speech to parliament. Hopefully, this is relatively easy to digest and a useful reminder.

It is acknowledged by all parties that the budget this time around is happening at a time of relative uncertainty surrounding Brexit’s exact outcome. Despite this uncertainty, the underlying message from Hammond was reassuring. The Prime Minister, Theresa May, had already foreshadowed an end to austerity with comments made at the Conservative party conference. Hammond embraced this new position, albeit not wholeheartedly. He said, “the times of austerity are finally coming to an end … although not just yet”.  This is characteristically cautious of a man not noted for taking big risks; Phillip Hammond does not display the same daredevil traits as his namesake, Richard!

The key points of the Autumn statement are as follows:

• Growth forecast to be resilient, despite Brexit uncertainty, averaging 1.55% per year until 2023

• Stamp Duty exemption on properties valued up to £500k

• National Productivity Investment Fund expanded by £1.6bn for a total of £38bn by 2023-2024 to meet infrastructure and industrial strategy commitments

• Annual Investment Allowance increased from £200,000 to £1m for two years

Throughout the discourse Mr Hammond offered a more optimistic outlook, thus able to justify his approach to reducing taxes and increasing public expenditure. Nevertheless, the thorny issue of Brexit lingered, and Hammonds speech informed us that £4.2bn has been added (reserved for) to public departments. This is by way of preparation for a disorderly Brexit and earmarked for spending in 2019-2020.

Hammond’s willingness to adopt further fiscal stimulus is still very much an option if a no deal Brexit is delivered. Meanwhile, the Chancellor continues to use language associated with a no deal outcome, dubbed ‘project fear’. He has indicated that pain may be felt throughout all the UK’s sectors without a negotiated deal to leave the EU.

Ultimately, a note of positivity does exude from the Chancellors speech. The decision taken on tax and spending show Hammond’s readiness to adopt fiscal policies as a means of stimulating the economy. With more stable finances it is good to see economic policy in forward gear again.

END OF AN ERA – A NEW ANGLE

Last weekend at the Hesse state election in Germany, the German Chancellor and Europe’s most powerful politician Angela Merkel announced she will step down in 2021.

Ms Merkel, after ruling Germany for the last 13 years, will “not be seeking any political post” once her term ends. Since her appointment in 2005, her strength has grown through Europe’s economic crisis and role as a conduit between Russia and the West. For many, Merkel represents stability in an unstable and shifting world. So why has Merkel’s political grip loosened?

Merkel’s hand appears to have weakened after more than 1 million immigrants were allowed into the country in 2015/16. Embedding such a vast number of migrants has proved troublesome with negative press reports of crime and violence. Unrest has also been triggered within the CDU party after Merkel shifted its communist roots, propelling it to Germany’s political centre.

Despite her tarnished popularity it is worth remembering Merkel’s influence in navigating Germany to Europe’s most powerful nation. Today Germany has falling debt levels and the world’s largest current account surplus; this happens when a country’s exports exceeds its imports. A surplus on trade increases growth in Gross Domestic Product (GDP), hence generally desirable. However, economists usually point out that dominance in trade can also coincide with sluggish low earner wage growth which can, over time, cause domestic political problems.

Here are some highlights of some notable Merkel successes:

2005 – Germany, after reunification, struggled to cope with high and rising unemployment, today it is falling and stands at 5.1%.

2007 – Russia cut off gas supplies to Belarus, the site for the main pipeline to Europe. Shortly after, Merkel visited President Putin, and assurances were given that Putin’s ‘pipeline politics’ would not affect the EU’s or Germany’s energy supply.

Economic growth –  reached an average of 2.0% in Merkel’s second term at a time when the rest of Europe limped along at 0.5%.

Export boom – Germany has become a global powerhouse in manufacturing creating a $280bn billion trade surplus in goods in 2016 – a figure only surpassed by China.

Energy Revolution – electricity has increasingly come from renewables putting them at the forefront of sustainable energy and a champion of climate change. 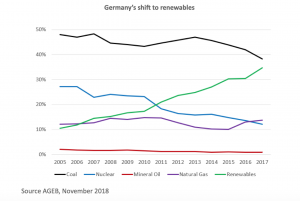 Today – the German economy is the 4th largest in the world!

So, even with the benefits of an export boom, and the riches of being part of a European powerhouse, voters are now seeking a fresh start with a new vision. This has started a debate – will Ms. Merkel finish the remainder of her three year terms, or will she jump rather than be pushed?

German politics today is splintered and polarised, just like many Western allies. The far-right populist Afd party is capitalising on the immigration crisis and a more inward looking Germany would worry European leaders, especially close ally, French President, Emmanuel Macron. He has made it clear that he wants his tenure to be associated with further and deeper European integration. Macron, for now, looks to be the default leader, but he will still need strong backing and support from Germany to push through his integrationist policies.

Whoever succeeds Merkel, and eventually steps up to lead Europe, will be the subject of much debate and speculation. One wonders if this will be a big distraction, making it necessary for Europe to agree a quick deal with UK Brexit negotiators rather than dragging on into a more uncertain political era.