Beyond the Headlines – The relationship of interest rates, inflation and recessionary trends, a US approach

Home Our BlogBeyond the Headlines – The relationship of interest rates, inflation and recessionary trends, a US approach
Share this page

In this week’s economic update, we showcase a special feature that steers away from the current climate and instead takes an historic look at the US’ economic policies. Specifically, the report focuses on the connection between interest rates, inflation and subsequent recessions as a means of interpreting the possible implications and outcomes of current policies.

Since December 2015 the Federal Reserve (Fed) has raised interest rates in 8 quarter-point moves. This carries implications for future economic growth not just in the US but globally; typically US interest rates act like a benchmark for other major economies. In view of ongoing developments, we thought we would stand back from the market noise and look at what history can tell us.

The chart below shows the long term path of US interest rates (known as the Fed Funds Rate) and inflation over the same period.

US Interest Rates and Inflation 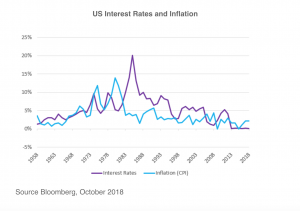 Interest rates are set to manage growth, maintain economic stability and constrain inflation. However, they are a ‘blunt tool’ and take time to work and exert the desired influence. The very strong relationship between interest rates and consumer prices is not a coincidence. It is important to understand why this relationship exists and why it matters.

In the 1970’s and early 1980’s, the interest rates were ratcheted up into double figures against a backdrop of persistently high inflation. The oil crisis, which began in the 70’s, was the main culprit causing prices to rise and spiral out of control. Interest rates had to overshoot (rise much higher than inflation) before having the desired effect of bringing inflation back under control. Once the inflation genie is out of the bottle it is difficult to get it back in!

At the other end of scale, in the aftermath of the 2008/09 financial crisis, interest rates were reduced to unprecedently low levels in an attempt to kick start economic growth.

When interest rates are set above inflation it means monetary policy is combative i.e. designed to cause economic growth to slow, possibly rapidly, which in turn cools inflation. The rate of growth is rarely smooth because it is responding to several different influences, not just interest rate changes.

We can see this in action with reference to Gross Domestic Product (GDP) in the chart below. As interest rates rise, particularly if doing so sharply, growth dips. The relationship also operates in reverse with growth picking up when interest rates fall back, a relationship evident in the aftermath of the 2008/09 financial crisis, although arguably quantitative easing has been a larger driver of growth.

One thing worth noting is that growth over time is generally in positive territory, only on occasion turning negative and usually for much shorter periods. These negative periods represent recessions. There have been 6 such occasions of negative growth since the 1950’s. This equates to only a total of 10 years of negative GDP in 50 years.

Of course, recessions differ in magnitude and duration. Their causes vary, and, in many cases, debt lies at the heart of the problem. Affordability is the key and, when ignored, problems emerge as interest rates rise. The tipping point is not easy to judge hence central bankers have a tendency to move cautiously unless they are ‘behind the curve’ i.e. they have made a policy mistake and need to act faster than prudence would dictate.

We can see very distinct periods when policy had a magnified effect. For example, the recession in the 1980’s was particularly bad, but not as severe as the 2008/09 recession when growth fell precipitously. The chart below shows just how different and more damaging the 2008/09 recession was compared to any other post war event. Interestingly, prior to the global financial crisis, interest rates did not rise nearly as fast because debt levels were being concealed and affordability ignored by banks that lost sight of the need for caution. 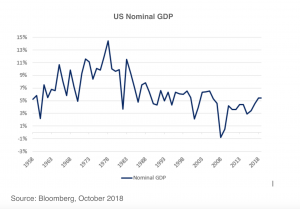 Today we are once again facing rising interest rates. How will this cycle shape up? In truth no one can predict exactly what will happen but we can offer some observations.

Note: we use calendar years except for the most recent date in 2018. This means peak to trough calculations will differ compared to quarterly period data.

• Interest rates troughed in a range of 0.0 -0.25%, holding off until December 2015 before the first interest rate increase.

• Growth in this cycle is very shallow. Nominal GDP has averaged just 4.00%; well below previous cycles.

• After taking account of inflation real growth is at 2.30% – lower than all prior cycles.

• Inflation has not been the battleground, hovering around the 2.00% Fed inflation target. Forecasts suggest another rate hike in December and more to come in 2019.

• Even if the highest predictions are correct this interest rate cycle will be relatively benign by historic standards.

Concluding remarks
Commentators today worry about the length of this cycle believing that it is coming to an end. Currently, it is the second longest since the war. There is no written law about how long a cycle should last and we cannot predict its duration.

However, what we do know is growth is only now beginning to pick up following the fiscal tax cut and spending increases agreed by President Donald Trump. Inflation expectations remain generally low and are belatedly responding to better employment and wage growth numbers. For the first time in this cycle, market participants are now believing the Fed’s forecast trajectory for interest rates. This is a good thing because it will restrain exuberance and improve the odds of the cycle continuing.

Today’s most vociferous commentators who are saying the cycle must end soon are, broadly speaking, the same voices saying the economy wasn’t growing fast enough to escape disinflation.

Memories of the crash linger, and this is a good thing! Yes, debt levels are arguably too high, but the economy is most definitely not overheating, and inflation is neither too hot nor too cold. It seems reasonable to suggest that the current interest rate cycle will be quite boring in comparison to previous ones. This is good.