Across developed economies, unfettered stimulus, both monetary and fiscal, is the one constant policy response to COVID-19. Governments, helped by central banks, deployed over $10 trillion of support throughout 2020 to navigate the harsh economic impact.

After stimulus of such scale, and vaccination programmes yielding results across most developed markets, you could be forgiven for thinking governments may wish to step back their commitments for further stimulus.

However, this week the Biden administration approved the latest round of Congressional stimulus spending, titled the American Rescue Plan Act.

Below, we look at the spending commitments contained in the plan, comment on its impact and assess its necessity.

The Value of the Package

At $1.9 trillion and around 10% of US Gross Domestic Product (GDP), to describe the package as significant is an understatement. The programme’s value is more breath-taking, considering it follows a $1.7 trillion bill passed in March and an interim plan of $915 billion in December. The final bill for COVID-19 related fiscal measures amounts to $4.5 trillion and over 20% of US GDP.

By comparison, the sums released to deal with the Global Financial Crisis’ fallout during 2008 and 2009 were paltry, at around $939 billion in total.

In common with its predecessors, the bill makes provision for direct payment to US households at a total cost of $410 billion. Individuals earning under $75,000 annually and couples earning less than $150,000 will receive cheques of $1400, an increase on December’s $600 and March’s $1200.

The plan also extends a $300 federal weekly top-up to state unemployment benefits until August at the cost of $246 billion. Likewise, an expansion to child tax credits costing $246 billion raises the maximum child tax credit to $6,600 from a current level of $2,800.

Funding for COVID-19 testing, treatment and contact tracing amounts to 7% of the package’s value. The agreement also provides funding for vaccine distributions and other medical supplies.

State and local governments will receive $360 billion, with $10 billion directed toward infrastructure. While the sum dedicated to infrastructure is comparatively tiny, the Biden administration plans to pass a separate spending bill for the sole purpose of infrastructure.

Later we examine a crucial trade-off associated with the stimulus provided. One thing is for sure: the immense scale of spending is likely to boost GDP growth both domestically and globally. The Organisation for Economic Cooperation and Development (OECD) projects the US economy will grow year-on-year by 6.5% in real terms in 2021, more than the global average and well above trend as displayed in the graph below by the green line. Some private forecasters predict growth may rise above 7%, and when added to inflation, nominal GDP may exceed 10% in the final quarter of 2021. 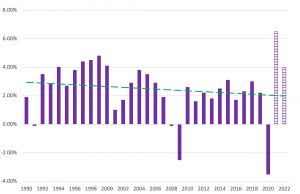 Source: US Bureau of Economic Analysis and Organisation for Economic Cooperation and Development, data as of March 2021 (2021 and 2022 projected)

The implications of a reflating US economy are also global. When coupled with its vaccine rollouts, US fiscal spending will contribute an estimated 1% to the global economy this year, around 1/5th of projected 2021 GDP. A booming US economy is undoubtedly a positive for the rest of the world and will have beneficial spill-over effects for other countries.

But what is the trade-off alluded to earlier? One significant possible consequence is significantly higher than expected inflation. Debates on such an outcome are fierce. Some economists say there is tremendous slack in labour markets, with around 10 million people currently unemployed. However, if labour markets over tighten quickly through the reopening phase Chairman Powell of the US Federal Reserve bank would have cause to rethink interest rates.

For the most part, prominent central bankers remain cautiously optimistic about their ability to counter any sustained inflationary upward drift or an inflation shock. One thing, though, seems reasonably certain. Economists anticipate a near-term pick up in the inflation rate because of something referred to as the base effect; last year, prices fell sharply. As we pass the anniversary date, year on year comparisons will naturally be higher. For the most part, forecasters see this as transitory, with inflation expected to subside as the base effect recedes.

In conclusion, after a year of severe economic contraction, the stimulus-induced economic growth is a welcome prospect for all of us to celebrate.