Biden’s ‘The Art of the Deal’: How to Pass an Infrastructure Bill

Home Our BlogBiden’s ‘The Art of the Deal’: How to Pass an Infrastructure Bill
Share this page

Cross party agreement is a rare occurrence in the US Senate. The polarity between the two parties and their supporters generally results in a winner and loser outcome whenever a bill is passed through the Senate. This confrontational aspect was very evident when Trump was in the Whitehouse.

However, only last week the Senate passed a $1 Trillion infrastructure bill, in an extraordinary demonstration of bipartisanship agreement. Biden managed to win the support of over a third of Republicans, resulting in a vote of 69-30 in favour.

The House of Representatives will now have to agree the bill and with such bipartisan support this would seem assured. However, it looks like leading Democrats will seek to link the infrastructure spend bill to the even larger social spending package also due to be voted on by the Senate.
Nevertheless Biden must be pleased that lifelong and highly vocal Republican Mitch McConnell, who controversially set out a plan to ‘halt Obama’ in 2014, voted in favour of the bill. He was even quoted as saying “I was proud to support today’s historic bipartisan infrastructure deal and prove that both sides of the political aisle can still come together around common-sense solutions.” 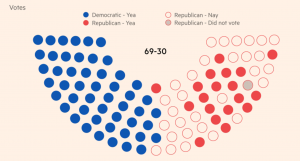 What Does the Infrastructure Bill Mean?

This deal promises to provide funding to areas essential to keeping the economy moving forward. It includes $550 Billion of new federal funding and will feed through to areas requiring much needed improvements such as:

The infrastructure bill also covers other areas such as much needed improvements to clean drinking water supplies and the electricity grid.

A somewhat controversial plan embedded in the bill includes is a new requirement to report all cryptocurrency transactions to the Internal Revenue Service (IRS). These proposed measures should help the IRS prevent and identify more cases of tax evasion. It is expected that an additional $30bn of revenue could be generated for the Treasury, that would have previously gone under the radar. However, this has sparked outrage among crypto investors who say, “it will place undue burdens on digital coin miners and software developers”.

Even though the bill received bipartisan support, it isn’t without criticisms. The American Society of Civil Engineers expressed concerned that it is too far below the original proposal of $2.6tn needed to maintain and expand the overall infrastructure to the level required for the population. 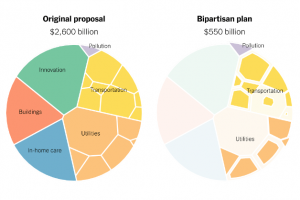 In the post pandemic world US government fiscal stimulus is likely to spur growth and encourage private sector business investment – vital for jobs and productivity gains.

The internet, rail and many forms of infrastructure stand to benefit, but more investment is needed.

Cross-party support is however unlikely to extend to the upcoming Biden Administration $3.5 trillion social policy budget. This targets areas such as climate change, healthcare, education, and paid family/medical leave, areas that Republicans will kick back on.