At the start of year, we wrote an article on the election of the new Brazilian president Jair Bolsonaro, nicknamed the ‘Tropical Trump’. He promised to restore the economy to health and tackle corruption. These were bold promises and they captured the mood of an electorate desperate for positive change.

Identifying the problems associated with an underperforming economy is the easy bit. For Bolsonaro the challenge is finding palatable solutions. In 2015 the economy suffered a devastating recession and the weak recovery ever since has contributed to growing discontent. The chart below makes this clear with economic growth barely in positive territory.

Tackling persistent low growth is a key priority. There is no doubt that high debt is holding back growth. Moreover, if the economy fails to grow debt will burgeon.

High government borrowing is holding back foreign investment. As a developing country Brazil desperately needs inward investors. They in turn must have faith that the capital they invest today will not be hit by debt defaults further down the line.

The IMF has warned that if the Brazilian system is not reformed the debt to GDP ratio of the country will hit 120%. This is a high level for any country but cripplingly high for a country trying to develop its economy.

As far as public spending and borrowing is concerned Bolsonaro and his government have a plan. But this plan faces resistance. It involves restructuring an exceedingly generous pension system.

In Brazil the retirement age for men is 56 and for women it is 53. With roughly 20% of the total population of 200 million people eligible at any one time, 42 million people are currently receiving pension payments.

As the economy has developed life expectancy has grown and by living longer retirees are putting more pressure onto tax payers to help meet the cost. To avoid passing more of the burden on, the government is having to borrow even more.

To bring this to an end reforming the pensions, is arguably more palatable than raising taxes or borrowing more. Of course, one’s view on this is very contingent on each person’s own circumstance.

Pension reform is not without precedent. In the UK the state pension age is currently 65 for men and 64 for women. This number will eventually reach 67 for both men and women come 2028. In the US, the earliest age to claim the state pension is 62 and this may also change.

This Tuesday, after decades of political deadlock, the Brazilian senate passed legislation to enact reform. Under the change the eligible age for men and women has been raised to 65 and 62 respectively. The turnaround this produces is sizeable.

Future projections, which take account of increased life expectancy, estimate this will save 260bn US dollars over the next decade. On this basis debt accumulation will stop. Moreover, any resumption of economic growth will allow debt to GDP to fall, thereby encouraging increased foreign investment. In fact, there are already positive signs that foreign investors are waking up to the opportunity. If this increase is sustained the spike in investment seen in July 2019 below, will eventually reverse the downward trend evident through the dotted line in the chart. 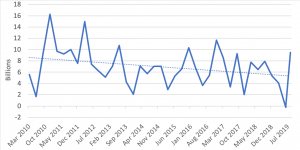 The aim for President Bolsonaro is to generate positive momentum. Year-on-year GDP growth has remained stubbornly low since his election in January. The hope now is the reforms to reduce the structural debt burden will ignite infrastructure investment through foreign investment.

This has been neatly summed up by the Social Security Secretary. He recently said, ‘…the fiscal impact is extremely relevant…the main thing is that it creates predictability and legal certainty to demonstrate to the market that the country will honour future commitments.’ Positive commitment to reform and constructive comments like these will buttress the efforts of Bolsonaro’s government to attract and sustain investor confidence.