The onset of Covid-19 led to a frenetic period of rapid and unprecedented fiscal and monetary stimulus. The graphs below compare the scale of the present response with the policy support enacted during the 2008 – 2009 financial. The charts starkly display the enormity of the assistance currently offered to individuals and businesses.

However, in the battle against Covid-19’s adverse economic effects, there are two fronts; Governments channelling money to the real economy (businesses and individuals) through fiscal stimulus, and central banks lubricating financial markets.

We get a sense of the scale of central bank action from our second chart, which highlights the rate of expansion of the US Federal Reserve’s (the Fed) balance sheet. In common with its global counterparts, the Fed has acted with substantial force since the crisis unfolded. 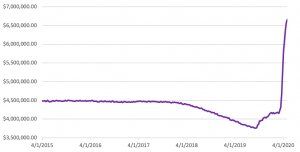 Where are we heading now?

It would be wrong to say a sense of calm has emerged, but after a series of emergency meetings involving rate cuts and reintroduction of bond buying, some semblance of normality has resumed. We note that globally critical central banks have once again started to meet according to pre-planned schedules.

Ahead of next week’s Bank of England’s Monetary Policy Committee meeting, we thought it essential to take stock and to update you on recent announcements from the Bank of Japan (BoJ), the European Central Bank (ECB), and the United States Federal Reserve.

Ahead of the ECB meeting predictions of a significant expansion to its $750 billion bond purchasing programme were rife, following concerns about surging Italian and Spanish borrowing costs and growing investor fears regarding the ability of both countries’ respective debt piles. However, for now at least, the ECB’s Governing Council has stayed its hand and kept the value of the programme unchanged. Likewise, the Eurozone’s main refinancing rate remained steady at 0.0%.

However, following estimates of a quarterly contraction of -3.8% in the Euro Area economy the President of the ECB reaffirmed the institution’s commitment to ‘do everything possible’ to support businesses and citizens of the 19 member states. Furthermore, Christine Lagarde stated capacity remained for the ECB to expand the value and composition of its bond purchasing programme, leaving the door to open for the ECB to purchase riskier, higher-yielding bonds.

Finally, to encourage banks to lend to customers and stimulate the real economy, the ECB lowered the costs of loans made to banks in the euro area. The rates for targeted longer-term refinancing operations will fall to -1% from June 2020, meaning banks will receive payment to borrow money and lend it out.

The Bank of Japan

The BoJ is the most interventionist of the major central bank, long engaged in innovative monetary practices to support the Japanese economy. On Monday, Governor Haruhiko Kuroda announced continued that tradition, refining existing policies to provide further stimulus for the world’s third-largest economy.

The BoJ pledged to purchase as many government bonds as needed and doubled the amount of corporate bond purchases to 20 trillion yen, or just under £150 billion. The announcement preceded the submission of an emergency budget from Prime Minister Shinzo Abe’s government, providing a fiscal stimulus package of around 107 trillion yen, the equivalent of just under £800 billion. Both programmes aim to provide enough support to households and businesses to prevent a crippling rise in business defaults.

The almost concurrent submission of the stimulus package and the monetary policy updates reflects improving coordination between the Japanese authorities.

The US Federal Reserve Bank (The Fed)

The monetary framework of the United States economy entered uncharted territory over the last few weeks, with trillions of dollars of stimulus injected and rates cut to near-zero levels. Therefore, it is unsurprising that, like the ECB, the Open Market Committee of the Federal Reserve voted to maintain its current interest rate target between 0% and 0.25%.

Also, the Fed intends to keep the target range suppressed for some time, with Fed Chairman Jerome Powell indicating rate rises were out of the question until inflation reaches the Fed’s target goal of 2%. With initial GDP estimates revealing the US economy recorded a quarterly drop of -1.2% in Q1, it will be some time before US inflation reaches 2%.

The major policy announcement from the Fed was an expansion to its Main Street Lending (MSL) facility. The programme intends to keep credit flowing to small and mid-sized business adversely affected by the shutdown. Access to the MSL has been broadened and will now be open to firms employing up 15,000 employees or up to $5 billion in revenue. Previously, eligibility was limited to companies with 10,000 employees and revenue of $2.5 billion. As before, companies receiving loans cannot engage in stock buybacks or dividends for the duration of the loan plus one year.

The MSL represents a massive step up and beyond the Fed’s usual remit to facilitate the functioning of capital markets and support to banks.

Except for the BoJ, the additional measures announced this week were moderated, reflecting some success from the ‘shock and awe nature’ of the prior policy measures.

Credit markets plagued by illiquidity have settled for now and spreads (the yield of a corporate bond compared to a government bond) have narrowed. The asset purchasing programmes of all three central banks alleviated liquidity and lowered borrowing costs for businesses.

Given the sheer scale of the programmes instituted over the quarter, it is probably prudent for central banks to pause and evaluate how their interventions are affecting the market. Looking ahead to next week, we expect the Bank of England to be similarly measured when the Monetary Policy Committee meets next week, and it is likely to keep its powder dry.