This week, Premier Li Keqiang, the second highest ranking Chinese official after President Xi Jinping, announced more tax cuts and new policies to stimulate the country’s slowing economy; a tactic they have been deploying for the past decade.

In his delivery to the National People’s Congress Mr Li said China would aim to deliver 2 trillion yuan (approximately $298bn/£227bn) of tax cuts. This included a cut in value-added tax from 10% to 9% across the transportation and construction sectors with a cut from 16% to 13% for manufacturers.

In 1979, China made a monumental decision to open its economy to foreign trade and investment and implement free-market reforms. On December 11th, 2001 they became a member of the World Trade Organisation (WTO). Over a forty-year time frame economic growth in China, on average, has been around 9.5% real (after inflation) per annum, a pace described by the World Bank as “the fastest sustained expansion by a major economy in history”.

Recently, China’s economy has matured, going from emerging to developed status. As a result, its real GDP growth rate has, unsurprisingly, slowed; from 15% in 2007 to the latest reading of 6.4%. The transition to a slower pace of growth is being carefully managed by China’s government. They periodically recalibrate expectations for economic performance as the future unfolds. In today’s terms and to ease the adjustment taking place across the economy they have enacted stimulus measures in the form of fiscal spending on infrastructure projects and through tax cuts.

The People’s Bank of China (the central bank) has played its part by altering the bank’s reserve ratio to release liquidity and facilitate lending. We can see how this unfolds in the chart below. As economic growth has slowed, so has the reserve ratio, allowing loans to be more freely available and in turn promote economic activity. 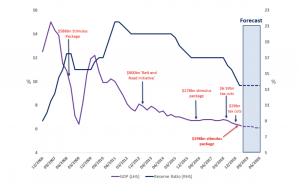 So just how significant is the latest $298m of tax cuts? It is small compared to the humongous $1.5 trillion tax break introduced by US President Donald Trump in 2017, however, the approach between the two powerhouses is different. China is injecting fiscal stimulus as and when necessary to manage a maturing economy. The US on the other hand is taking a more unorthodox approach. They are cutting tax late on in the current business cycle to reinject vigour into their economy which has been lacklustre relative to prior cycles.

It is difficult to quantify exactly how much the tax cuts will benefit China’s economic growth, especially with ongoing trade tensions between China and the US and the impact from tariffs that have already been imposed. However, we know for sure that manufacturers, transport and construction are set to benefit. This, in turn, may produce a multiplier effect spreading out into the broader economy.

In conclusion, the central authorities in China periodically reset the groundwork for growth. Their new growth target is now in a range, of 6-6.5%, whereas in the past they have set a specific target which, inevitably, they managed to hit with amazing regularity! Looking ahead they are signalling a new phase of development. In this phase they will be relying less on fixed investment and exporting and more on private consumption, services, and technical innovation to drive economic growth. China’s maturity into an economy with cutting edge technology is ongoing and competition for future supremacy in key technologies is well advanced. The world is now waking up to this new reality.