As Janet Yellen, Chair of the US Federal Reserve discussed the economic outlook last Friday, economists were looking for indications of a potential interest rate hike at the next Federal Open Market Committee (FOMC) meeting on the 15th of March. Yellen started her speech by saying that as long as data holds up, “a further adjustment of the federal funds rate would likely be appropriate” later this month. According to Yellen, “the Committee will evaluate whether employment and inflation are continuing to evolve in line” with their expectations. The last piece of the jigsaw which will help to drive the Fed’s decision is the Employment Situation report for February which is due to be released later today.

The FOMC’s objectives when setting US interest rates are based upon maximising the level of employment and achieving the 2% inflation target. We are led to believe that if the employment statistics improve, then it is likely that we will see interest rates increase in March.

The new jobs report released today highlighted better than anticipated figures, with 235,000 new jobs created during February, making a rise in interest rates all but certain. Three rate hikes are expected this year and the overwhelming consensus among economists is that rates will go up in March. 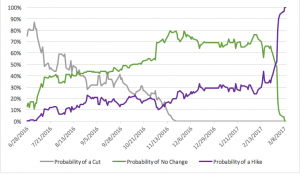 While bond, prices may weaken as yields move in tandem with interest rates, equity Investors are of the mind that an increase in interest rates is positive for equities and represents a sign of a stronger US economy.

Chancellor Philip Hammond set the scene by stating that “the deficit is down but debt is still too high”. Shortly after, he announced that the Office for Budget Responsibility (OBR) revised economic growth forecasts for 2017 up to 2% from 1.7%. The Budget increased taxes for the self-employed and cut the tax-free dividend allowance from £5,000 to £2,000 from April 2018. Furthermore, the Chancellor announced that the government is planning to borrow £23.5bn less over the next five years. In conclusion, the Spring Budget was a cautious one which, as Brexit looms, is no surprise and stock and currency markets barely moved. The biggest change on the day was among UK Gilts, with the 10-year government security yield edging up 3 basis points to 1.22% on the back of higher economic growth expectations.

Historically, in times of uncertainty investors seek out “safe-haven” assets such as bonds. This was evident after the UK voted to leave the European Union, with UK government bonds, known as gilts, soaring in value.

In the aftermath of the financial crisis, unconventional monetary stimulus or Quantitative Easing (QE) was employed to stimulate economic growth. These measures pushed gilt prices to record highs. As the price of a fixed income security rises, the effective level of interest, or yield, it pays falls in value. So, while bond yields have continued to fall, bond holders have seen the capital value of their investment rise substantially. The graph below plots the course of the 10-year gilt yield since the beginning of June last year.

As we can see, yields reached exceptionally low levels in August 2016, falling sharply after the Brexit vote and bottoming out at 0.5%. Fearful that the UK could face difficult negotiations with Europe as we prepare to leave the European Union and that a ‘hard Brexit’ could hit the economy and reduce tax revenues, some investors downgraded their assessment of the UK’s creditworthiness.

However, bonds also tend to ebb and flow in line with inflation expectations. Since September 2016, UK inflation, as measured by the Consumer Price Index (CPI), rose from 0.6% in August to 1.8% in January – stimulated by the fall in the value of sterling and higher oil prices. Higher inflation generally is unfavourable for gilts, because inflation erodes the future value of any coupons, or interest payments, as well as the value of the original capital invested. So, as inflation began to pick up, investors were inclined to sell bonds causing prices to fall and yields to rise.

More recently, February was another turning point for gilt yields. Concerns about inflation receded, investors revised down their expectations for interest rates rises and bond prices rallied as a result. Looking ahead, what we know is that bond yields will continue to be influenced by external economic factors. Inflation is forecast to surpass the Bank of England’s 2% target next month and bond yields are likely to be pulled higher in order to compensate investors. However, while bond prices may come under pressure, investors who bought at or below the issue price of £100 will get back their initial investment if they hold their bonds until maturity. 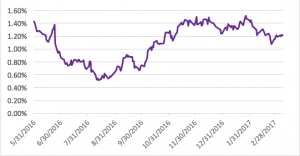