This week the latest figures on UK industrial production were released. The data shows a significant improvement relative to the consensus forecast of 1%, jumping 2.1% in November, and largely reflects a rebound in the oil and gas sector, as the Buzzard oil field in the North Sea came back online following a prolonged shutdown.

Similarly, UK manufacturing output rose 1.3% in November, more than reversing the previous month’s 1% fall. Pharmaceuticals was the greatest contributor in November, increasing 11.4% after being the worst manufacturing sector in October.

If overall production held steady in December, then output would have fallen by 0.1% over the quarter (Q4), less than the 0.4% decline from the previous quarter (Q3). Business surveys point to a much stronger rate of growth in manufacturing output, suggesting that the sector will add more to the overall growth of the economy.

Further data released by the Office for National Statistics (ONS) showed the goods trade deficit has expanded by £2.3bn to £12.2bn in November. Taken at face value the devaluation of sterling has struggled to influence the UK’s exports as much as it was first predicted to since the results of Brexit. Total imports surged 8.4%, greatly outpacing the 2.8% rise in exports, however on a volume basis (which excludes currency moves) exports are trending positively and imports have slowed. The jury is still out on whether sterling devaluation will help reduce the UK’s trade deficit but in any event the Brexit negotiations will be pivotal as 71% of UK’s goods trade are linked to EU countries.

On Wednesday, Mark Carney, Governor of the Bank of England (BoE) gave a briefing on the UK’s financial stability. He stated that ‘the immediate risk posed by Brexit to the UK economy has declined’, and explained that action by the central bank before and after the vote to leave the EU, such as lowering interest rates and an extension of monetary stimulus through quantitative easing, had reduced the danger to the country’s financial stability. However, the overall level of risk is still “elevated”.

So what does this mean? Well, taking on board the stronger than expected performance in the second half of 2016, and Carney’s comments, the BoE now looks likely to upgrade its forecasts for the UK economy when it publishes its latest report next month.

While admitting that Brexit still posed domestic financial stability risks, Carney believes the risks on continental Europe are greater in the short term. EU nations rely heavily on the UK for their financial needs and could potentially face major problems if international banks based in London are no longer able to gain easy access to European countries and corporations. This week we’ve also seen the likes of HSBC and London Stock Exchange (LSE) highlight the need for transition arrangements. They have called for a 3-year Brexit delay to allow companies to adjust to new trading arrangements between the UK and EU in order to mitigate systematic risk.

The inauguration of president-elect Donald Trump will take place next week, on the 20th of January. Aside from the theatrics Trump once again has insisted that Mexico will pay for the wall he wants to build along the southern border to stop illegal immigration.

In the build-up to the US election and post-result, Donald Trump warned car manufactures that they will face a “big border tax” if they don’t move jobs and production back to the US from Mexico. In 2015, the US imported $74bn worth of vehicles from Mexico, whereas the value of exports of vehicles to Mexico from the US was only $22bn and America’s overall trade deficit with the country that year was $58bn. Cars are by far the largest export from Mexico to the US, and without them the trade surplus with the US disappears. Trump often compared America’s trade deficit to a company losing money. While cutting the trade deficit would spark short-term growth for the US, longer-term US exporters may lose out, consumer prices could rise and businesses may cut back investment. Every action causes a reaction.

Already, we’ve seen the influence of Trump’s message come to reality as Ford and Fiat Chrysler, recently backtracked on their plans to build new manufacturing plants in Mexico. Moreover, since the election of Donald Trump, the US small business optimism index in December saw its biggest monthly rise since 1980. A net majority of small companies now expects a better US economy this year, up from 12% in November. Rising confidence underpins the economy’s upward momentum. 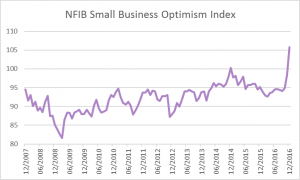