The only way is up!

The Federal Open Market Committee (FOMC) decided after Wednesday’s meeting to raise interest rates by 0.25%. The US Federal Reserve’s (Fed) target range for the federal funds rate is now 1.75% – 2.00%. Interest rates in the US have now risen by 0.50% this year and by 1.75% since they started raising rates back in 2015.

Policy makers had been bullish around the state of the US economy, buoyed by stimulatory fiscal policy. The economy is getting a boost from $1.5trn worth of tax cuts and a $300m federal budget spending increase. Added to this is the improvement in the rate of job creation. Unemployment in the US is currently at 3.8%, the lowest since the 1960’s and well below the Fed’s 4.5% target rate.

Gross Domestic Product growth is predicted to come in at 2.8%, well above the Fed’s forecast 12 months ago. Inflationary pressures remain in check despite stimulatory fiscal policy. 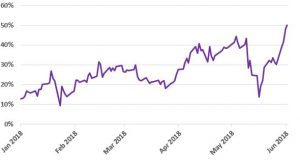 With a robust outlook for economic growth, inflation remaining under control and unemployment on a downward trend, officials have increased the number of interest rate rises they expect to occur in 2018 from 3 to 4. The Fed has also signalled that they expect 3 more interest rate hikes in the US next year bringing the fed funds 2019 target rate up to a range of 3.00% – 3.25%.

The dot plot graph above, used by the FOMC to signal each member’s outlook for the path of interest rates, indicates a more determined desire to raise rates.

If the dot plots prove accurate, financial conditions will tighten (while remaining relatively accommodative) in response to continued strong activity levels across the economy.

In terms of outlook, the Fed is trying to provide as much clarity as possible. They announced that they will hold a press conference after every meeting, rather than occasionally. We know from history that central banks are capable of upsetting markets when they spring surprises, hence this is a welcome move. There is a saying that the job of central bankers is to ‘take away the punchbowl just as the party gets going’.

For now, the picture in the US is one of economic growth continuing while inflation is held in check by the gentle tightening of monetary policy. The US central bank is shrinking its balance sheet after expanding it to sustain the economy in the post credit crisis years. On this basis, absent a major shock, there are strong grounds for believing that the current economic cycle can be prolonged.

Doves pretending to be hawks?

The European Central Bank (ECB) president, Mario Draghi, and his colleagues held their first formal talks on Thursday to decide when to end their asset purchasing programme, also known as Quantitative Easing (QE).

The purchase of public and private sector securities (bonds) injects liquidity into the European banking system allowing financial institutions to make more loans and corporations to invest more. This policy tactic, along with zero interest rates, has been designed to promote a higher rate of economic growth within the Euro area.

Last year, on 26 October, the ECB Governing Council decided to reduce the rate of bond buying by half, from €60 billion a month to €30 billion a month. This is a sign of increased confidence that the measures taken to promote economic recovery have taken hold. 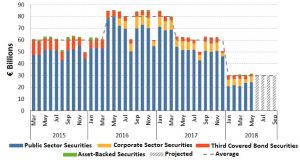 The ECB confirmed that QE would be extended, albeit at a lower rate until the end of the year, with the first interest rate increase expected to take place in the middle of next year.

Over the years the ECB has expanded its balance sheet to €4.5 trillion. No hints were offered as to when shrinking will take place. In contrast to the US, they are simply advancing to the stage of no longer expanding their balance sheet. 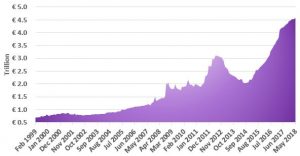 The ECB expects interest rates “to remain at their present levels at least through the summer of 2019 and in any case for as long as necessary to ensure that the evolution of inflation remains aligned with the current expectations of a sustained adjustment path”.

The ECB meeting on Thursday gave something for hawkish and dovish investors to think about, with Draghi having something to offer to everyone! Inflation hawks got an end date in sight for QE, while doves will be pleased that the ECB will continue to purchase bonds for longer than previously thought, with interest rates unchanged until summer next year.

The fact that the ECB are waiting until the economy is in a better situation is not unreasonable given the backdrop of political uncertainty.

After a poor start to the year for the UK retail sector, May’s data for retail sales (excluding fuel) exceeded analysts’ expectations.

Results released on Wednesday show sales increasing by 1.3% on the month. On a year on year basis sales are up 4.4%. This annual rise exceeds forecasts by 1.9% reflecting an underestimation of the performance due to negative perceptions around the sector.

The announcement of the positive result lead to a 0.50% rise in sterling against the greenback. 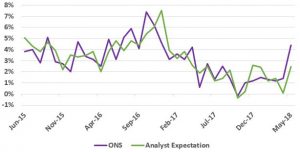 The UK retail sector, and activity generally, had a relatively gloomy first quarter. UK shoppers experienced the wrath of the ‘Beast from the East’, which as we mentioned last week spilled over into lower industrial production, construction and wider services related activity. For retail, the main drag has been non-weather related – real incomes have been supressed by rising inflation at a time of stagnant wage growth. Across the media, the catchall excuse for everything is BREXIT!

Recently though the mood has turned more positive. The data suggest shoppers in May were more willing to spend, spurred on by a consistent spell of glorious weather and the nation’s upbeat mood in response to the Royal Wedding celebrations. Aside from these transitory effects economists have a less engaging way of explaining the effect – rising real disposable incomes. This means wages have started to rise faster than inflation but the trend is in its infancy right now. The most recent data on wage growth and inflation showed the continuation of positive real income growth with figures for the end of May reporting a 2.8% increase in wages, whilst inflation held at the annual rate of 2.4%.

As mentioned, perceptions around the retail sector tend to be negative. The high street is in flux providing a source of negative news for the media. They can gorge themselves on a veritable feast of negativity as businesses shed jobs, or go under – BHS, Maplin and M&S to name a few.

Of course, we are now all familiar with the shifting trends towards shopping online and how it is decimating the traditional bricks and mortar retailers. For example, 17.5% of all retail purchases (excluding fuel) in May were carried out online. Behind the scenes traditional retailers are working to enhance their online presence as a way of retaining market share, but for some it is too little too late. In future, when we hear negative news associated with the retail space it is worth making the distinction between total amounts being spent by consumers compared to the methods of spending (i.e. high street or online). Recent upbeat retail sales figures are a positive reflection on the health of the UK economy and point to improving levels of consumer confidence.

The good weather cannot be guaranteed, but analysts are expecting strong retail sales to continue in June/July as the world cup kicks off. Consumer spending, of which retail sales form a part, is a significant contributor to UK economic growth and evidences a kickstart to confidence. Expectations for rates being raised at the Bank of England meeting in July are low, but stronger retail sales figures have increased expectations that the Bank of England will be confident enough to raise rates at their next meeting in August.