What does this interest rate hike mean for the US and the rest of the world? For the US, it means that their central bank believes the economy is expanding and Chair of the US Federal Reserve, Janet Yellen, said the “simple message is the economy is doing well”. Yellen also stated that “the global economy [genrally] is doing better” and is growing stronger.

Even though the rise was expected, markets reacted after the announcement. The US Dollar Index (which looks at dollar movement against a basket of major currencies) dropped 1.1% on the day. Over the past 3 years, the US dollar has been negatively correlated with gold so as the US dollar depreciates, gold appreciates. This trend continued, with a 1.7% increase in the price of gold.

What can we expect next? The FOMC continues to be of the opinion that “it will be appropriate to gradually move” interest rates higher and confirmed that two more hikes are forecast to take place throughout 2017. Yellen indicated that what the FOMC wants to see next is a pick up in wages with maximum employment, price stability and improved productivity building on the strong economic data from the US.

On Monday, the European Union Bill (Notification of Withdrawal) was passed by MPs and peers. It allows the Prime Minister, Theresa May, to notify Brussels that the UK is leaving the EU, with a two-year process of exit negotiations to follow. May said that she will trigger the process by the end of the month. Sterling investors seemed to process the news relatively slowly and the main reaction, reflected in currency price movements, took place the following day. Scottish First Minister, Nicola Sturgeon’s calls for a second independence vote also prompted a temporary selloff in sterling followed by a quick recovery after Fed Interest rate hike and Dutch election results the next day. The beginning of the legal process of negotiations with the EU can be seen as a positive as this will shed light on what the future of UK trade may look like. It is notable that in the immediate aftermath of the vote Toyota announced a £240m investment in their UK factory which employees 2,500 people.

On Wednesday, the Office for National Statistics released fresh employment data which revealed that the UK unemployment rate fell to 4.7% in the three months to January 2017, the lowest it has been since 1975. Furthermore, wage growth slowed to 2.3% from 2.6% for the same period, narrowing the gap between wages and inflation. Weakness in sterling since the Brexit vote has pushed import costs and oil prices higher which edged inflation, now at 1.8%, closer to the Bank of England’s 2% target.

Wage growth is taken into consideration by the Bank of England (BoE) when deciding whether to adjust interest rates. On Thursday, interest rates were left unchanged, remaining at 0.25%. Despite low levels of unemployment, the modest level of wage growth supports the BoE’s Monetary Policy Committee’s view that enough slack remains in the labour market to warrant keeping rates on hold for the time being.

This week Dutch liberals, the People’s Party for Freedom and Democracy defeated the far-right Party for Freedom who were campaigning for the Netherlands to pull out of the European Union (EU), the euro and to close their borders to Muslims. This is the first key European political event since the UK referendum and US Elections.

Relieved European leaders were quick to congratulate the People’s Party for Freedom and Democracy and their leader Mark Rutte as the results emerged. French President Francois Hollande said the outcome was a “clear victory against extremism”. Markets responded positively with the euro spiking to 1.047 against the US dollar, its highest level since 7th January this year. The leading stock market in the Netherlands – the AEX Index, rose as much as 0.9% and the Eurostoxx 50 rose 1.2% as markets opened to the results on Thursday morning. Also contributing to these movements were the expectations for global growth sginalled by an increase in US interest rates, and a fall in the dollar.

Key elections are still to be held throughout Europe, with the French and German elections on 23rd April and 22nd October respectively. These will be closely watched by all European members and investment managers alike.

Euro and US Dollar Exchange Rate (Year to Date) 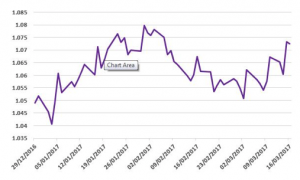