Japan’s Gross Domestic Product (GDP) growth for the 3 months to end June 2017 has outpaced its G7 peers (Group of 7 nations which includes UK, US, Canada, France, Germany, Italy and Japan). It is also well ahead of market expectations.

Annualised growth, fuelled by strong private sector spending and increased business expenditure, is running at 4% which is 2.5% higher than in the previous quarter, this is the 6th consecutive quarter of growth in Japanese GDP.

As most of us know, Japan’s economy is export led. Perhaps less well known are the difficulties they have faced in trying to drive up domestic demand. However, with the economy firing on all cylinders Japan is now top of the G7 growth podium.

GDP figures from Germany, Canada and Italy are yet to be released and Japan’s figures are only preliminary but for a nation that has been struggling with poor domestic economic fundamentals and demographic headwinds it seems we are now getting better news from the Land of the Rising Sun.

Source: Eurostat & National Statistics Agencies. Note: Data for Japan, US, France and UK are actual readings while the others are forecasts.

More data coming out of the Euro-area indicate continuing economic recovery across the 19 nations. In the second quarter activity picked up, expanding by 0.6% (or 2.5% annualised). Euro-Zone economic growth is supported by rising business confidence which is now at a decade high. Declining unemployment, in theory, should apply upward pressure to prices but, as in other countries, inflation appears to be subdued and operating with a time lag and economists are struggling to explain this phenomenon. Nevertheless, if the pace of growth continues and inflation shows signs of picking up, the European Central Bank may begin the process of tapering or winding down their programme of Quantitative Easing and ultimately raising interest rates.

Bitcoin (a crypto-currency) has continued its astonishing surge with its value increasing from $570 to $4300 in just over a year. This represents a 750% gain and is grabbing the attention of the media.

Crypto-currency functions in the same way as normal currency but without notes or coins. It is a digital currency that exists on people’s computers allowing owners to buy anything, assuming the seller will accept the currency.

While some may worry about not being able to touch or see crypto-currency it is in some respects no different to money sitting in a bank account, which is essentially digital in form. Bitcoins, just like cash, can be transferred from one account to another.

Bitcoin is, however, fundamentally different from money in one key respect – it has no centralised financial system. Currently, money is brought into existence by central banks printing paper that we keep in our pockets or in our accounts. This is known as the fiat system of money. In simple terms, coins and notes are the official alternative to the bartering of goods and because fiat money is recognised and set up by governments people have faith in the system.

Bitcoin, by contrast, is managed by the users of it and this in turn sets the market price. There is no single entity behind Bitcoin to back the currency, which brings us to the unlikely subject of tulips. Back in 1630 the tulip was considered to be a store of value. Demand made the price of a single tulip rise to over 10 times the average salary in the Netherlands. There was no control to the production of the tulip so people just kept growing them making supply outweigh demand. Therefore, as people realised that the value of the tulip was pretty much nothing, as it could just be grown in your back garden, the price collapsed to almost zero in 2 months. What people thought was a store of value evaporated leaving holders penniless.

At the moment, Bitcoin holders are enjoying momentous gains because there is supposedly a limit to supply as only twenty-one million Bitcoins are available. Investors remain wary though because they fear their holdings may get hacked or its value may one day disappear if the restriction on supply changes.

Unless you are a professional trader, or you simply want to gamble, Bitcoin is unlikely to be suitable at this time. It is a currency which represents value rather than having value itself. The Bitcoin currency is not managed by any government agency, nor is it backed by any government. Bitcoin value is purely dependent upon holders having faith that it will continue to have value. Right now, the market looks a lot more like tulip mania than careful investing but longer term one of its advantages, from a currency perspective, could be its international nature and its ability to facilitate cross border transactions in an era of increasingly global trade.

In the most recent round of reporting of corporate earnings, US companies delivered strong profits in the quarter to the end of June 2017. More than three-quarters of the S&P 500 members outpaced estimates and across every sector at least half of the companies met or surpassed expectations.

One aspect benefitting US companies is a windfall from the US dollar which has depreciated almost 5% during the quarter. The US dollar has fallen in part because President Donald Trump’s economic agenda has stalled, especially tax reform. A weaker US dollar helps overseas revenue by making American exports cheaper and a majority of the S&P 500 companies are multinational firms trading globally. Sales revenues from Europe and Emerging Markets are a rich source and with companies within the index receiving 44% of their revenue from outside the US, the translation effects have been helpful.

Of the 454 companies in the S&P 500 that have so far reported their numbers, 68% have beaten analysts’ average estimates for revenue and 78% have topped earnings per-share expectations. According to data compiled by Bloomberg, company profits have, on average increased by 9.8%, while company sales have climbed 5.5%.

Interestingly, companies topping expectations on both sales and earnings aren’t getting rewarded with immediate stock market gains. This possibly indicates company valuations are already elevated, or there is disappointment that companies have not raised their full year forecasts. On a positive note, it means that full year estimates for 2017 should be easier to beat provided the global economy remains on a positive growth trajectory. 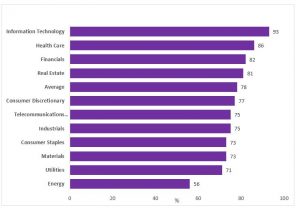 Source: Bloomberg, 17 August 2017. The above equity indices are quoted in sterling and represent total return.

Source: Bloomberg, 17 August 2017. The equity indices above are denominated in sterling and represent total return.