On Wednesday, Chancellor Philip Hammond delivered his Autumn Statement to Parliament, the first major economic announcement since the UK voted to leave the European Union. He outlined measures to help “ordinary working-class families” and stressed that the best way to raise living standards are through a stable economy with fiscal discipline and better productivity. The key points of the Autumn Statement were as follows:

The UK has shown remarkable resilience in the wake of its vote to leave the EU. Although the economy is expected to slow, the Office for Budget Responsibility still expects growth to be at least as good as that of Germany and better than both Italy and France.

However, Britain is set to face a number of challenges in the next 2-3 years as negotiations around Brexit continue. With other European countries also considering their place in the EU, there is the potential for further political uncertainty. In the face of such headwinds Hammond has taken a prudent approach in his first Statement, providing as much fiscal flexibility as possible. By adopting a frugal stance, he has left himself headroom for any necessary action later. The proposed fiscal mandate gives him scope for £26.5bn more in structural borrowing in 2020-21 than his predecessor was aiming for last March, which is a reasonable war chest with which to fight future economic encounters.

One of the main topics highlighted by the Chancellor on Wednesday was a projected increase of approximately 50% in government borrowing over the next five years. With the announcement of increased borrowing, UK Government Bonds fell in response to the deteriorating outlook for public finances and 10-year gilt yields rose from 1.35% in the morning to 1.48% by mid-afternoon, the largest increase in almost a month as investors started selling UK sovereign debt. By market close, yields had drifted back, finishing at 1.45%. The chart below illustrates the sharp increase in 10-year UK gilt yields on the day the Autumn Statement was released. 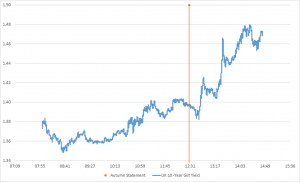 Rising bond yields can indicate that interest rates are likely to follow suit. While rising interest rates can be unsettling for financial markets they are, inherently, a sign of growing economic prosperity.

In addition, one of the quirks of actuarial accountancy is that the value of Defined Benefit or “Final Salary” pension schemes is closely linked to interest rate levels. In the way that pension deficits are calculated, as interest rates rise, the level of the deficit falls. So, firms like British Telecom, British Aerospace and Rolls Royce, with large pensioner bases, have been labouring under ever increasing pension deficits and been required to divert profits away from paying dividends to shareholders in order to build up their pension funds for the benefit of retired employees.

As interest rates edge up, these pressures should ease and companies with large final salary pension schemes should find themselves rerated as they are able to allocate a greater proportion of their profits either to reinvest in the business, or pay out by way of a higher dividend. A number of our Portfolio managers have been increasing their holdings in these companies in order to benefit from just such a revaluation, proving that all clouds have a silver lining.

In the two weeks leading up to the US election, the market experienced declines for nine consecutive days. However, as the Trump-rally continues, the Dow Jones Industrial Average index hit record highs this week. The blue chip index, which represents the 30 largest, publicly owned companies based in the United States, surpassed the 19,000 mark on Tuesday closing at a record high of 19,083.18 on Wednesday.