The UK’s decision in June 2016 to leave the European Union has created an historic opportunity. The question now before Government and Parliament is how best to implement the referendum decision. On Tuesday, Theresa May delivered her speech on Brexit.

Below are some of the key points emanating from her speech:

Theresa May’s plans for Brexit have provided more clarity on the situation. This shows that the UK is determined to continue their relationship with Europe despite leaving the single market, but will also look to negotiate new trade agreements worldwide. Furthermore, the US, the UK’s largest trading partner (14.5% of total UK exports), has already suggested that the UK will be at the front of the que in terms of striking a trade deal.

If we look at how the UK measures up with other developed economies, we see a similar trend. After two years of unusually low price pressures, inflation has begun to revive. Much of this is because the oil price fell below $30 a barrel in the early months of 2016, but has recently risen above $50. Rising inflation will be welcomed by central banks and ease fears of deflation which each of the countries in the graph have flirted with over the past couple of years.

In saying that, Mark Carney, Governor of the Bank of England, previously happy to allow inflation to drift higher than its 2% target, this week stated that the UK was entering a “period of somewhat higher consumer price inflation”, and that “as a result, the next interest rate move could be either up or down”. This is a change in tone from previous pronouncements whereby interest rates were considered unlikely to rise even if inflation picked up. However, Carney pledged that whatever transpires, the Monetary Policy Committee will manage monetary policy to achieve the inflation target in a sustainable manner. 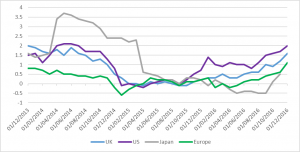 With the inauguration of President-elect Donald Trump taking place today, speculation regarding what his term in office will actually entail is already well underway. Trump’s mantra has been focused on putting “America first”, investing heavily in the nation’s infrastructure and accelerating economic growth. Trump has suggested infrastructure spending of $1trn, which would certainly help boost the US economy, but the question is where the money will come from, and also at what cost to the federal tax payer. Trump suggested that the infrastructure investment would be achieved in a deficit-neutral manner, however, suggestions of tax cuts would make this unlikely.

A possible solution would be through further borrowing or deficit spending. However, this leads on to one of the first tests of the Trump administration – what to do with the current debt ceiling. This is a limit on the amount of monies the US can borrow, effectively a “ceiling” on the amount of bonds the US can issue; a level of fiscal discipline that otherwise would be ignored by politicians. The current debt ceiling stands at $18.1trillion and is set to expire in March 2017, by which time it is estimated that US debt will have reached an egregious $20.1trillion.

In order to avoid defaulting on debt, Congress will be keen to get debt levels back under control but may feel compelled to raise the debt ceiling. This sets the scene for what will likely require bipartisan agreement involving both sides of the House, Republicans and Democrats.

Failure to reach agreement will trigger automatic budget cuts, known as sequestration. So what can we say at this early stage about a likely outcome? First, expect a lot of heightened rhetoric in the media. Second, the stakes are very high and last time Obama negotiated sequester relief in key areas where increased spending supported economic growth. The desire to grow the economy is what will most likely support accord. We are early in discussing this subject and will come back to it again as the debate gets underway. For now, to be forewarned is to be forearmed.