THE LAND OF THE RISING SUN

News emanating from the US, UK and Europe, whether it is Italy, Trump with his trade agenda or Brexit, is keeping journalists very busy. However, commentary on Japan has been scant. This being the case, we thought taking a closer look at what is happening in the land of the rising sun would be interesting. We looked at monetary policy, trade, currency, business reform, demographics and debt. We share our thoughts below.

Last Friday (15th June), the Bank of Japan (BoJ) Governor, Haruhiko Kuroda, announced that monetary policy is to remain unchanged. The BoJ are sticking with regular bond purchases and leaving interest target rates at -0.1%. While leaving policy unchanged came as no surprise to analysts, the continuation of accommodative monetary policy is supporting economic growth.

Japan’s private capital expenditure (CAPEX) formation is also impressive. It is on track to increase for the 8th consecutive year, this year. Bloomberg Economics state that capital expenditure is “being driven by investment in new facilities and technologies, not short-term spending to adjust to temporary shocks or inventory cycles”. This is good news for the long-term growth of the economy as structural CAPEX is less susceptible to monetary policy changes which can turn on a whim.

Exports increased by 8.1% over the year to the end of May with their main exports, machinery, electrical machinery and transport equipment, growing at 9.9%, 11.3% and 1.7% respectively. Imports have also grown, at a faster rate than exports, increasing by 14.0% over the year. One of the main contributors to their higher import bill is the need to import vast quantities of petroleum. Japan relies heavily on imported oil, hence the jump in the oil price contributed to the 28.6% increase in the economy’s fuel bill.

The Yen has been strengthening as it is often regarded as a ‘safety’ currency. Investors tend to increase exposure to Yen when there is turbulence in the markets, such as increased trade tensions which kicked off between the US and China at the beginning of the year, see chart below. As mentioned, a stronger currency represents a headwind for Japan’s export-led economy. Japan still manages to increase exports showing they are highly competitive when it comes to trade.

Japanese Yen Value Against the US Dollar (Dollars per 1 Yen) 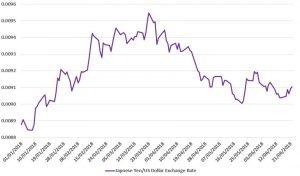 Capitalists have for a very long time been critical of Japan’s business policies toward shareholders. The general sense is that shareholders are not treated fairly, with management and employees being overly protected.

In the Financial Times this week, it was pointed out that the Japanese and US stock markets have the same number of companies – 3,600. This statistic is relevant when you consider that the US economy is four times the size of Japan’s, and its stock market, in value terms, is 5 times bigger.

To counteract the lack of corporate zeal, business reform has been underway since Prime Minister Shinzo Abe was elected in 2012. This brought forth changes such as challenging large conglomerates to unwind complex cross-shareholding where large companies shield unprofitable subsidiaries. This is reinforced by targets set to ensure minimum levels of profitability are being met and by forcing through votes to increase the number of independent directors on company boards.

Levels of debt in Japan have burgeoned, with debt increases aligned with the ageing population. Debt levels also reflect the legacy of Japan’s banking crisis in the 1980’s when a large asset bubble in their economy burst, forcing the government to bail out the banking sector (sound familiar?).

It is estimated (in 2017) that there were 2.1 more deaths than births per 1000 people in Japan and the population is projected to fall by over 38 million by 2065. While this is happening, the Japanese authorities have been issuing debt to fund public services at a time when tax revenues have been falling. Debt, as a proportion of GDP, is now 224%.

Debt as a Percentage of GDP 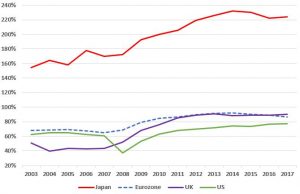 While this is worrying, many economists say Japan has little option but to pursue reflationary policies (backed by high domestic savings) as deflation is an even worse problem to have.

THERE IS ONE MORE HAWK IN BRITAIN

ast week central banks from some of the major global economies took decisions on the direction of their monetary policy. Both the Federal Reserve and European Central Bank indicated moves to tighten policy. They are intent on shifting towards ‘normalisation’, with the US much more advanced in this respect. As mentioned, the Bank of Japan decided to maintain its accommodative policy, leaving rates unchanged. This week, it was the Bank of England’s (BoE) turn to take a decision on whether to raise rates.

Members of the BoE’s Monetary Policy Committee (MPC) met on Thursday and investors correctly predicted that the bank would not push for an increase this month. Before the meeting the probability of a rate hike was set at 2.0%

A good steer in advance of the meeting as to the likely outcome was provided by Silvana Tenreyro, an external member of the MPC. Earlier in the month she may have inadvertently led markets when she said “while I anticipate that a few rate rises will be needed, the timing of those rate rises is an open question”.

Although the final no rate rise outcome did little to get pulses racing, there were some interesting new features. For example, the bank signalled a hawkish tone in its post meeting statement saying it wants to move faster toward ‘normalising’ monetary policy. The BoE signalled that it would be lowering the threshold for when it would start to unwind its Quantitative Easing (QE) programme. Previously, the BoE had stated it considered reducing its QE stimulus once interest rates had reach 2.0%, however, this rate has now been lowered to 1.5%; although the bank said it would need assurances that the UK’s economic backdrop was strong enough to support the change.

Another unexpected turn for markets was Andy Haldane, chief economist of the BoE, changing his vote to favour a rate rise. This is the first time that Mr Haldane did not side with the majority favouring of holding rates since he joined the MPC in 2014, thus it was a big change for him. His shift in voting intentions left the overall vote at 6-3 and indicates opinion of rate setters edging closer to tightening monetary policy.

A new hawk within the MPC gave sterling a boost versus the US dollar with the rate rising to £1/$1.32 and gilt yields firmed slightly on the news. The market probability forecast after the new information was digested jumped by 22% and is now at 71% for a rate rise in August. Higher interest rates are coming!

US BANKS – A RETURN TO HEALTH, STRENGTH AND CONFIDENCE

There’s no doubt about it, US banks have had a tough time over the last decade. However, some believe that it hasn’t been tough enough in terms of being held to account for their past misdemeanours! After almost a decade of tighter regulation (the Dodd-Frank Act and Basel III enacted) forcing banks to rebuild capital, we ask is the tide now turning the other way?

US banks are displaying an improvement in profitability and overall financial health. This coincides with the Trump administration claiming they are keen on rolling back some elements of financial regulation believing a softer approach will promote faster growth across the economy, a stance many agree with.

With the climate seemingly turning more favourable for bank management, there is a move afoot to allow banks to step up the amount of money paid back to shareholders. From announcements this and next week, US banks are hoping to be allowed to return $170bn to investors through dividends and share buybacks. This would take place over the coming four quarters and represents a whopping 25% increase, provided they pass a two-part stress test. In the first round of stress testing on Thursday, the Federal Reserve (Fed) reported that “the nation’s largest bank holding companies are strongly capitalized and would be able to lend during a severe global recession”. The severe scenario includes US employment rate rising by 6% to 10% level along with a steepening Treasury yield curve.

Looking back, we know that US banks reintroduced dividends after the 2007 global crisis much faster than those in other countries facing similar problems. This is because US banks were faster to restructure. However, with the boosted probability of the record pay-outs following the first stress testing round, it would be the first time bank are being allowed to return more money to investors than they will have earned in normalised profits. This is represented in the chart below.

Forecast Gross Dividends and Buybacks as a % of Profits

US banking is one of many sectors benefiting from President Trump’s fiscal stimulus, primarily through tax cuts. A lower tax bill amounts to a saving of $3.6bn in the first quarter of 2018 alone. At the same time US banks are looking to repatriate cash from overseas putting it to use domestically – America First!

The health of the US economy and its ability to withstand interest rate hikes from the Fed have steered an increased level of confidence between consumers and businesses. This is evident from a pickup in trading revenue and increased velocity of money. US banks’ profits have been boosted by a steep yield curve. This occurs when the difference (spread) between short-dated and long-dated Treasury yields widens. This benefits banks because profits grow faster when spreads are wide. However, spreads have been narrowing which means banks are more reliant on volumes picking up.

The decision to allow banks to once again over-distribute is being criticised by many stakeholders. Their main concern is that it is too early following the hangover cure implemented in response to bad behaviour leading up to the crisis. Paying out more than they earn is happening at a time when the yield curve is flattening. As a result, critics say this may encourage even more bank lending to make up for less profits earned from spread lending. Health, strength and confidence is entrenched in the US banking sector.