The pound spiked up against the US Dollar on Thursday morning as the Bank of England governor Mark Carney expressed optimism following improved, updated economic data for the second quarter of 2018. In his remarks he made it clear that the subdued economic performance in the first part of the year was “largely due to the weather, not the economic climate”. 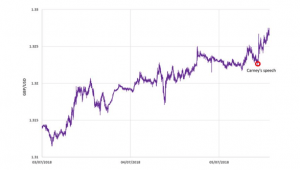 Prior to Carney’s speech in Newcastle, currency markets had already started to boost sterling v the dollar (also known as the ‘cable’ rate). Sterling remains low by historical standards and likely to remain volatile in the face of uncertainty over Brexit.

However, the positive tone from the Bank of England did raise analysts’ expectations of an August 2018 interest rate rise. The probability of a quarter point being added to base rates increased from 66% to 82% and we are getting close to this being a near certainty next month.

Beyond August, gradual rate hikes are expected to continue in line with the strength of the economy. The expected pattern of gentle hikes is demonstrated in the below chart. 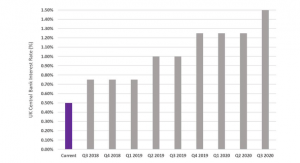 While currency investors responded quickly to governor Carney’s signal, bond investors were more sanguine, noting the lack of timelines and definitive guidance. Lack of real clarity reflects several factors weighing heavy on the mind of Monetary Policy Committee’s (MPC). For example, the inflation target must be considered but at the same time the MPC must also support government objectives for growth and maintaining high employment levels.

Nevertheless, some of the uncertainties holding back economic performance in the earlier part of the year appear to have lifted. For example, the MPC acknowledge that the labour market is going from strength to strength. Unemployment levels are at their lowest levels since 1975 (4.2%) and business demand for labour keeps increasing. The corresponding rise in wages is helping consumer demand now that real disposable incomes, after inflation, are rising.

Since the onset of the financial crisis a decade ago the shift toward ultra-low interest rates has been very beneficial to the UK. It has helped businesses to improve their profitability and, in many cases, lengthen the duration of debt on balance sheets lowering the cost of financing their debt.

However, the BoE recognises that one of the risks of keeping interest rates at unprecedentedly low levels is an inability to cut them meaningfully again if economic growth falters in the future. In the last meeting of the MPC, three members voted in favour of an increase with the remaining six in favour of maintaining the current level at 0.50%. None of the members voted to lower rates, a sign that members are beginning to sense that the economy is capable of sustaining itself.

Carney’s slow and steady approach is an effort to shelter economic progress achieved to date. He wants to continue to support growth whilst controlling inflation at target levels of 2%. Getting interest rates higher is not necessarily negative. Watching the US economy from this side of the pond we note how the Federal Reserve has managed to push rates higher without derailing growth. As soon as the US economy appeared healthy enough, their central bankers started to show greater determination and willingness to push interest rates higher. This approach comes straight out of the central bank interest rate setting playbook.
After a weak start the construction sector is bouncing back. Adverse weather conditions hindered progress early in the year, but house building and commercial work is picking up again.

Evidence supporting improving construction activity comes from the UK Construction Purchasing Managers’ Index (PMI). The index level increased to 53.1 from May’s 52.5 with any reading above 50 indicating the sector is expanding.

This is the third month in a row that the construction index has shown an improvement. Duncan Brock, group director at the Chartered Institute of Procurement and Supply, which co-produces the survey along with HIS-Markit said, “Despite being hampered by economic uncertainty, firms reported an improved pipeline of work as clients committed to projects”.

One area in the spotlight is new home building. Orders for new homes rose at the fastest rate since 2007, indicative of a healthy housing market.

Housebuilding giants Persimmon and Bovis Homes also signalled robust housing conditions. Persimmon reported higher first-half sales with a 5% rise in revenues in the six months to the end of June. They also revealed that the average selling price of private homes is now £236,000, a 2% increase.

We know from economic models that higher house prices tend to cause positive wealth effects: Consumer confidence and spending increase when people feel wealthier. Furthermore, a healthy housing market encourages a positive spiral of greater investment with yet more homes being built. According to Persimmon, “Consumer confidence remains resilient in our market and attractive mortgage products provide compelling support to purchasers of new homes,”. Bovis Homes also added to the cheer by stating “housing market fundamentals remain robust, with good demand for new homes across all our regions and underlying pricing remaining firm”.

The chart below illustrates how consumer confidence is moving out of the doldrums, picking up pace since the turn of the year.

Finally, a more buoyant construction sector, with rising house prices, should improve spending, increase economic growth, boost investment and contribute to lower levels of unemployment. Whilst these are promising signals for the future of UK construction, we caution that the sector can often be volatile. Sentiment will be swayed by the Brexit agreement, just 9 months away, but as we have seen before, the business of business is to get going.