In this week’s economic update, we review recent data coming out of the UK pertaining to the fastest wage growth in over a decade. We also extend the scope to wider Europe, discussing the drive for technological development in batteries required for Europe to remain a key player in the automotive sector.

Show me the money

Throughout previous editions we have continued the discussion around wage growth; more specifically the lack of growth, registering a general bewilderment with regards to its absence.

The economic downturn in 2008, unlike previous financial declines, saw the imposition of very large government bailouts across the banking sector. This was accompanied by austerity measures on government spending, low interest rates and quantitative easing. Throughout this challenging period, confidence about the future remained low and memories of the crash strong.

Within sections of the private sector, an increase in ‘zero-hour’ contracts, and multi-part-time jobs, appear to have contributed to lower wage growth. Job security in this area is low and employees lack the ability to argue for higher wages. At the same time ‘globalisation’ encouraged free movement of labour, and in the UK, many low paid, low-skilled jobs were filled by workers from overseas. In the state sector the introduction of austerity meant public sector wage growth was extremely limited. All these factors played a part restricting wage growth in inflation adjusted terms. It could be argued that with wages not keeping pace with inflation this has been influential in so called populist voting; voters wanting to escape austerity.

In recent months wage data has started to improve, albeit from a very weak level. This time, data released shows another steep increase in average weekly earnings (excluding bonuses). Wages are now 3.1% higher than a year earlier. This is the fastest rate of growth since the crash and subsequent recession and the first time the headline rate of pay growth has been higher than 3% in a decade. The rate of growth is also higher than inflation meaning that real spending power is improving. 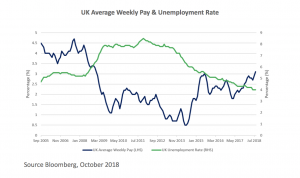 Getting to grips with the underlying determinants behind earnings growth starting to improve is complex. We offer two plausible explanations:

First, government finances, albeit still shaky by historic standards are improving. The UK’s fiscal deficit has fallen below 2% of GDP, much healthier than post-crisis levels when it soared into double digits. With tax revenues rising, the government appears to be signalling a desire to relax public spending constraints. For example, a pay increase of 3% for certain staff working in the NHS was recently announced. Such actions cause ripple effects, with remaining public-sector workers likely to argue for similar pay raises, which then spill-over into the private sector.

Second, employment levels have been improving for many months now. The latest reduction in unemployment, by 47,000, takes unemployment to 4%; the lowest level for over 40 years. The impact of lower unemployment levels means employers are more likely to offer incentives and higher wage levels. This helps them to attract a better standard of workers from a shrinking talent pool.

The question that has been asked over and over as to why it has taken longer for wage growth to emerge is one that can be argued about endlessly. After a long period of favourable employment conditions, it may simply be this – wages tend to operate with a lag.

What happens next is of great interest. A common by-product of wage-growth within an economy is a corresponding increase in inflation. However, if the UK economy achieves improvements in productivity and invests productively this is what will allow inflation to remain subdued for an extended period. We have discussed several times, the factors having an influence on inflation. There are many which are varied and too complex to forecast with accuracy. Hence, we must wait and see how the cycle unfolds.

One clear positive is the relevance of higher wage levels for future tax receipts. Tax revenue should increase. This is good news for the chancellor who must try and balance the books. The uptick in wages may also be timely for borrowers and consumers. While interest rates are still set on a low trajectory, there will be pressure for interest rates here in the UK to rise if growth picks up; rising wages are a useful offset to higher borrowing costs.

The catalyst for interest rates to rise from what are unprecedentedly low levels, could initially be Brexit. A breakthrough on the impasse that has formed will help alleviate fears around trade, growth and investment. However, with negotiations still underway we must wait and see what happens.

Ever ready? Europe pushing off the backfoot in batteries!

The evolution of battery technology in recent years has been incredible. Lithium ion (li-ion) is enabling electric vehicles to become a realistic alternative to unleaded/diesel fuelled vehicles. The batteries offer increased mileage capacity and appealing performance. One of the most popular brands bringing performance, practicality and luxury is US based Tesla. They are expected to top sales of Porsche in 2018 (270,000 vehicles relative to 256,000).

This week the dynamics of regulation have shifted the goal post. The need to respond to climate change has moved from an ideology to a requirement. European car makers are required to meet a 35% reduction in carbon dioxide emissions by 2030, sparking concern amongst Europe’s leading manufactures including Volkswagen. The direction of travel is going one way, towards electric powered vehicles and away from fossil fuels.

At the core of the electric vehicle is the rechargeable battery. As it stands the world is inherently dependent on production from Asia. They will produce 80% of the batteries in the 2.1 million cars expected to be manufactured this year. China alone will produce 69% of that total figure, a leadership which the Stanford Social Innovation Review felt was optimistic back in 2013.

However, in innovative industries change is ever present. The US is currently lagging, but in 2009, as part of their economic stimulus plans, they allocated $2.8bn towards investment in advanced battery technology. This was an incredibly smart move directed at battery makers, technology companies, automakers and universities. Those participating had to provide matched funding.

The recent announcement by the EU suggesting they are only now waking up to the fact that they are woefully behind is disappointing. The US currently has a 15% market share, but Europe is languishing at just 4% despite having positions of dominance in the global car market. 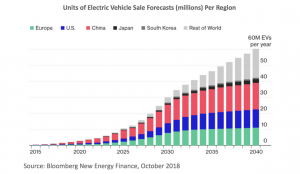 The monopoly which Asia holds may not last. It is the result of first mover advantage and whilst their creativity has been to the benefit of the global industry, it leaves the rest of the world lagging and playing catch-up. However, with the US firmly back in the race and Europe keen to participate, there is a lot to play for.

For Europe it may not be too late. They plan to target research in technology to power other transport forms, as a diversifier, rather than focus on the electric car market. They have introduced plans to establish smarter ways of managing investment, focusing on true innovators i.e. the businesses who are on the ground developing the technology to ensure the most efficient application of funds. They hope this is a smarter way of working to avoid government bureaucracy.

The basis of intervention is that EU member states must collaborate on development and share knowledge. If a member state uses the European funding available, it must work with two other states and share knowledge. A key aim is to avert job losses in a sector which employs 13 million people. Cambridge Econometrics believe this move could add circa 200,000 jobs to the market by 2030 should 50% of new production be electric. The chart above is taken from research carried out by Bloomberg back in May 2018, however, the announcements this month may enable Europe to take a greater share than previously expected.

According to Bloomberg global demand for all electric vehicles is forecast to be at 30 million units per annum by 2030, thus if Europe can increase their existing 4% share of battery production they may be able to benefit from a new growth industry.