This week we look at big spending Australians who have not been put off by choppy political shenanigans in their country (5 Prime Ministers in 5 years!). We also take another look at Japan’s unusual demographic profile. We review policy actions designed to mitigate its effects and to reverse the forecast population decline already underway. Finally, we take a look at upcoming mid-term US elections. The posturing by both parties will be fascinating and grab increasing news headlines as the election unfolds. So get ahead of the game and find out more about this topic and the others mentioned by reading our reviews.

There is no shortage of items on President Trumps agenda. However, his attention will now be resolutely focused on the mid-term elections taking place in just two months’ time.

Mid-terms occur every two years. Ironic perhaps, but they were introduced by the founders of the United States to ensure continued political vigour! During this fractious time the main political parties will be battling for control of the US bicameral Congress (split into 2 Chambers) and the legislature power which comes with that. This is a key event because losing majority control of Congress would weaken Trump’s ability to implement policy and fulfil his unconventional agenda. It would also enable Democrats to start impeachment investigations into his administration.

Historic precedent since World War II indicates parties loose on average 25 of the available 435 seats in the House of Representatives, this was seen with Obama in the 2014 midterms where he lost 63 seats giving the Republicans a majority. On this occasion the Democrats need only gain 23 seats to take control of the House from the Republicans so Trump has a big task ahead of him if he wants to keep getting his own way.

Voter participation in the mid-terms tends to be lower, at around 40%. Republicans tend to have the largest turnout, which often works in their favour. However, this time Democrats may be swayed to come out and vote in protest and to express their obvious distaste of the President. His policies on immigration, ‘the wall’, the environment and the threat of trade wars have caused great angst among Democrats.

Trump on the other hand is likely to focus on his economic achievements. His “America First” and pro-business stance has worked to the advantage of many Americans. One of the most important aspects favouring an incumbent President is the state of the economy – as the famous political saying goes- ‘It’s the economy stupid’.

The areas where Trump is on potentially winning ground are as follows:

• Tax reform implemented in January reduced corporation tax rates from 35% to 21%. This has been well received.

• Continuous signs of improving financial health of business; 99.0% of companies have now reported Q2 earnings and 80.0% of the figures continue to beat analyst expectations by 5.0%.

• Firms are expected to use the benefit of the stimulus to increase capital expenditure thus continue to grow. 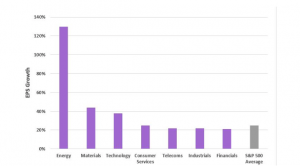 One of the biggest indicators of Trump’s claim of an improving US economy is an advancing stock market. The chart below demonstrates 36% growth in the S&P 500 index since his election.

• In a global context, the MSCI World index shows global markets were up much less, by 24.4%, during the same period (and a big part of this growth is from the US which makes up 50% of the index!)

• Taken together, Trump says it is evident that value has been added through policy. 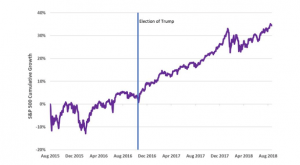 Trump is also likely to highlight enhancements in the job market.

• President Trump claims to have added 3.4 million jobs since his election stating, “Our economic policy can be summed up in three very simple, but beautiful words: jobs, jobs, jobs”.

• Real incomes are yet to catch up suggesting the traditional Philips Curve relationship has not yet taken hold, but the labour market overall looks very strong relative peers such as Europe (unemployment at 8.2%).

The Trump debate is heating up. However, he has a wealth of positive statistics to demonstrate improved the health of the economy as he heads into the mid-terms in a battle to maintain legislature power in Congress.

In the wake of 2008’s global financial crash, the world’s major central banks adopted extreme, expansionary, monetary policies. They saw a need to entice risk taking and encourage spending over saving. In this context, UK and US interest rates fell to below 0.5%, from their previous levels of 5.4% and 3.6%, respectively. The unconventional processes began in earnest within a matter of months of policy being decided.

Australia, however, was not afflicted by the same disinflationary, high unemployment problem evident in Europe, the UK and the US. Therefore, Australia maintained relatively high interest rates until recently. Through the early part of the pre-crisis cycle their average level was 5.6%, before falling to their current, record low level of 1.5%.

Growth in Australia, compared to other developed economies, has been relatively high. This happened without the help of unconventional monetary policy but in 2016 growth began to slow and the central bank moved interest rates to a record all time low level to help kick-start the economy.

According to a recent Bloomberg report, growth in Australia’s GDP spiked to 3.5% in the second quarter, far exceeding economists’ expectations. The expansion recorded was predominantly fuelled by a sudden boom in consumer expenditure. According to Philip Lowe, Governor of the Reserve Bank of Australia, the jump in spending is in direct response to the decision to lower interest rates to 1.5% and to keep them there for the past 26 months.

In tandem with a lower cost of borrowing, individuals and businesses tend to invest more, which further amplifies economic expansion. Finally, as is often the case, lower interest rates lead to a depreciation in a currency’s value. This in turn helps the terms of trade. Import costs increase but exports become cheaper and more attractive to overseas buyers. An amalgam of these factors can lead to subsequent growth in the country’s GDP, assuming, of course, that net trade improves alongside growth in consumption.

At a time when central banks are being more restrained in their deployment of monetary policy support, Australia’s economic success may face more challenges. Demand for commodities represents a big part of the Australian economic growth story. This will be impacted negatively if their near neighbour’s economy, China, slows. In the meantime, growth is strong. Philip Lowe has indicated that rate rises are possible but he believes they are a long way off happening. A higher interest rate trajectory in Australia is likely as the expansion accelerates and becomes self-sustaining. The need for monetary stimulus generally fades as an economy grows stronger.

LAND OF THE ‘SETTING’ SUN- SOME STARK CHOICES AHEAD

Last week, we wrote about “Japan – Demographics and inflation, or is it nappies and haircuts?”. In our note we discussed some of the remarkable challenges Japan’s policy makers currently face. This week we look at policy choices, past and present.

Previous investment in high quality health care has increasing longevity in Japan with an average life expectancy of 87 years. At the same time, falling birth rates have left Japan with an ageing, shrinking, population. By 2050, 36% of the population is expected to be 65 and older, up from 28% today.

One of the critical issues behind this oddity is that older people save more. Furthermore, the resultant smaller population reduces the overall demand for goods and services across the economy. The fear is that despite deploying extensive pro-growth policies and higher wages from a tightening labour market (job places outnumber applicants two to one), the population demographic will continue to hamper economic growth. For Prime Minister Shinzo Abe, a mounting government debt pile, lacklustre economic growth and an electoral vote weighted towards the elderly makes it difficult to do what is inevitable, and necessary – he needs to trim pension benefits, yet again.

Extending the longevity of the people of Japan has come at a cost. As illustrated in the chart below Japan has outstanding debt that is more than double its Gross Domestic Product. In any other country this situation would be untenable but Japan’s debt pile is almost entirely funded and sustained by domestic savings. This means the risk of capital flight and early repayment demands from fearful investors is negligible.

With unemployment at very low levels and a dwindling population, policies that boost fertility, support working mothers, enhance automation and encourage immigration are all necessary.

Unemployment, Debt as a % of GDP and natural population change

This week, Abe made a plea to overhaul further the nation’s social security system. If enacted this will extend the retirement age past the age of 65 and, if workers opt for retirement at 70, pension benefits received will be higher – an interesting dilemma for retirees to consider! In an interview with Asia’s popular press Abe said, “more labour participation would boost economic growth, raise tax revenues and generate more social security premium receipts”.

Abe is also pushing for other reforms including a] less stringent requirements for foreign workers to help alleviate the labour shortage and b] acknowledging the need for a “system that would bring in a broad range of foreign workers with a certain level of skills and expertise”.

Shinzo Abe is up for re-election this month. If elected it will be for a third term as Prime Minister, making him the longest serving Japanese PM. Despite low popularity poll ratings, his sustained tenure has paved the way for continuity in both domestic and foreign policy. Laying out his unpopular policies, which tackle the demographics and population structural issues, may ironically turn out to be what secures him a third term. The stark demographic reality Abe confronts is also faced by his rivals. With unpalatable choices ahead, the electorate may decide that it is better to be safe than sorry and stick with the man they know.