The latest official figures for UK inflation, measured by the Consumer Price Index (CPI), released by the Office of National Statistics, showed a 0.9% rise. This was an unexpected fall from September’s 1.0%; after widespread warnings that the weaker pound would cause inflation to accelerate.

Manufacturers and retailers are feeling the inflationary pressures arising from the fading impact of lower oil prices along with the fall in the Pound which has increased the cost of imported raw materials by 4.6%. Some of these costs are being absorbed by manufacturers as the price of goods leaving the factory gate rose by only 2.1%. This is unlikely to last and inflationary pressures are likely to feed through to consumer prices throughout 2017-18 as retailers look to protect profit margins.

Mark Carney, Governor of the Bank of England, commented that, “Inflation was lower than we expected” but added “I would not take a steer from the October numbers…inflation is going up”. 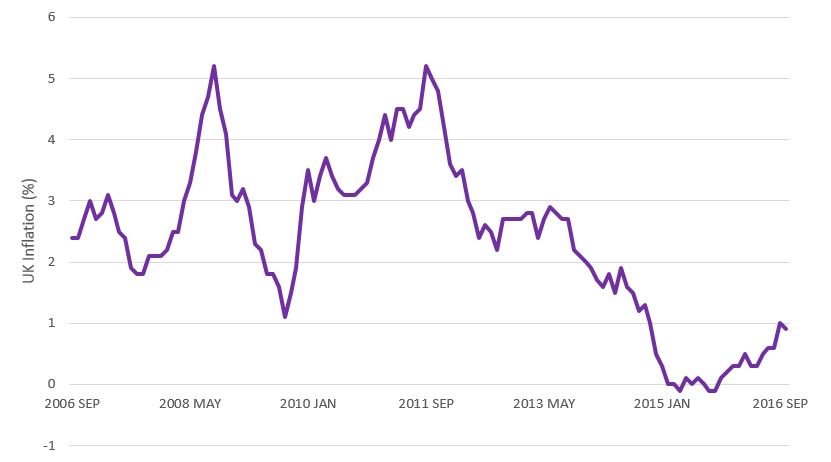 UK unemployment fell by 37,000 to 1.6 million in the three months to September, with the unemployment rate now standing at 4.8% – its lowest level for over ten years. The number of people in work has also hit a record high of 31.8 million. While the Bank of England’s warnings of higher unemployment remain in place, the labour market may naturally cool because the economy is close to full employment. We suspect that if this happens it will be seized upon as the economy suffering a Brexit related hit; keep an eye out for sensational headlines! In the meantime, the Brexit vote has, if anything, reduced unemployment figures as European workers hurry to find a job in Britain ahead of any potential change in the rules as a result of the government invoking Article 50 next year. 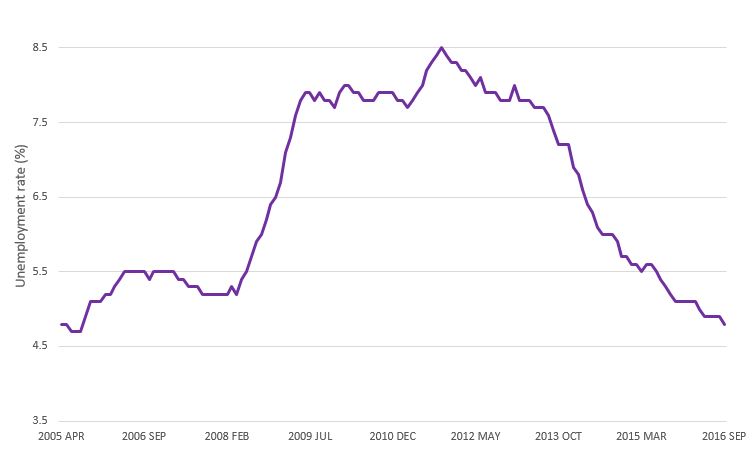 Average weekly earnings rose by 2.3% in the quarter to September. This is above the September inflation rate of 1% (which eased to 0.9% in October), this helps underpin consumer spending and generates a positive wealth effect. Real wage growth has been positive for the past few years and as highlighted previously, there have been improvements in the distribution of wage growth favouring lower paid employees. We expect ‘labour’ will take a higher share of corporate profits in the form of wages if skill shortages appear.

On Wednesday 23rd November the Chancellor, Philip Hammond, will unveil his first Autumn statement. Although cognisant of the need to manage the budget deficit, and with an eye on uncertainty over Brexit, he is under pressure, not least from the Prime Minister Theresa May, to introduce a series of populist measures designed to help the “JAMs”, those in working class areas who are “Just About Managing”.

A freeze in fuel duty, cuts to air passenger duty, and further childcare subsidies to help working people are among the measures currently under consideration.

He is also expected to honour the Conservative manifesto commitments to raise the Income Tax threshold to £12,500 and to increase the threshold for higher rate tax to £50,000.