Eurozone Sentiment – It helps to be cheerful

Economic sentiment surveys of businesses are important gauges of future intentions. For example, if purchasing managers express confidence about orders for goods and services they may begin to plan to increase production, hire more staff and even pay higher wages.

Surveys carried out asking individuals and investors how they feel about the current state of play and their future intentions also hint towards behavioural changes, which can be useful when trying to gauge the future.

Sentiment often ebbs and flows just like our own moods, but moods can also ‘trend’ (see chart below). When trending up or down we get a much firmer indication of future intentions, probable outcomes and the direction of travel for the economy.

Sentiment indices can produce their own feedback loop, linked to the prevailing mood. For example as sentiment picks up it generates confidence to spend and invest and this shifts back into improved sentiment, encouraging even more positive behaviour. Of course, feedback loops operate in reverse too.

There are many different flavours of sentiment indicators. Some for manufacturing, some for services. Some are for business and some for investors and individuals. Below we look at a broad indicator of sentiment for the Eurozone, the European Commission’s Sentiment Index. 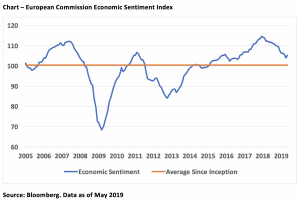 When we think back over what has been quite a turbulent period for the Eurozone it is reasonable to expect to see sentiment shifting around. Indeed, this is what we see in the chart – sentiment peaking at a high, optimistic, level back in 2007 just ahead of the financial crash. Thereafter, it trends down sharply as the crash unfolds and from 2009 onward sentiment trends up; with a big dip in 2010 which encouraged a substantial monetary response from The European Central Bank (ECB).

Last year sentiment dipped again, responding negatively to slowing global growth and Trump’s trade wars. The latest reading doesn’t show up too well on the chart, but it turned upwards. The number came in at 105.1, above both the previous level of 103.9 and the forecast of 104.4. Significantly, this is the first rise in the index since June 2018- could this be the start of an upward trend or is it transitory?

The European countries driving the improvement are France, Italy and Spain. The Netherlands detracted a little. The improvement in economic sentiment is being driven by increased optimism in services. Manufacturing has picked up but note from the chart how much weaker it has been compared to the service sector which has remained robust. In fact, manufacturing has been the main source of weakness. This is because it is most impacted by worries around trade. 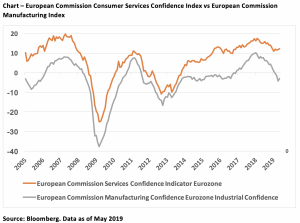 Services holding up is vital for the Eurozone. Manufacturing activity falling hits several Eurozone countries, Germany being the key one, but services make up a larger part of the eurozone economy. Thus, strength of demand and resilience of consumers in this key sector have prevented the region from falling into a technical recession, i.e. 2 successive quarters of negative GDP.

If the increase in sentiment can be sustained in services and confidence in manufacturing industry improves, we will see Eurozone activity start to pick up. At a time when the ECB has struggled to generate inflation, which is running at 1.7% and below their 2% target, getting growth going is important.

A growth and inflation boost together will offer the ECB a reason to bring an end to their crisis era ultra-loose monetary policy. Historic low bond yields, negative in some countries, and interest rates at 0%, are not symbols of future prosperity. Let’s hope the ECB have a reason to bring about an end to crisis management monetary policy and that this is achieved with the help of European consumers remaining cheerful.