We suspect many of you will have skipped past articles in the press this week about a legal ruling made by the German constitutional court. But we believe it is essential to bring this ruling to your attention, because of the its near-term economic effects and the possible implications for the EU’s ability to counteract economic problems caused by the COVID 19 pandemic.

Put simply, European politicians face a threat to EU unity. Rich northern European countries, like Germany and the Netherlands, are not at all keen on granting fiscal aid to Italy and Spain, whose economies are struggling with large debts. If there is to be assistance, Germany and the Netherlands believe it should be through loans. Invariably any loan will come with conditions attached and must be paid back!

Before delving into case, we need to set the stage. A summary of the programme under scrutiny follows.

The PSPP began in 2014 as part of the ECB’s Quantitative Easing (QE) programme. The goal – stimulate the Euro-Area economy over and above the help given through low-interest rates.

QE resulted in the ECB purchasing more than 2.2 trillion euros of government bonds, enabling European banks to facilitate more lending. The ultimate aim of the programme was to ensure the inflation rate reached the ECB’s target of 2%. 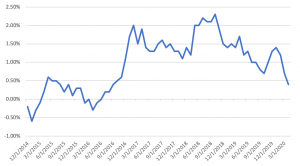 The PSPP was mostly successful in its aim. The inflation rate of the Euro Area trended upwards from a deflationary profile in early 2016 to reach the ECB’s target rate of 2% in 2016, and again in 2018. But, despite the programme’s apparent success, the PSPP is considered highly irregular among some legal and economic circles in Germany.

Since the financial crisis, the same German critics have launched a series of legal challenges to a several ECB and EU programmes and Tuesday’s ruling is the culmination of a challenge first brought to the courts in 2015.

According to the complainants, buying the sovereign debt of euro area members through the PSPP meant the ECB effectively financed eurozone governments by monetary means; an illegal practice according to the relevant EU treaty.

The case first reached the German constitutional court in July 2017, when it deemed legality of the programme was doubtful. Following standard practice, the German court referred the case to the Court of Justice of the European Union (CJEU), which judged the programme to be legal. So far, so good?

The German Constitutional Court on Tuesday did not outright deem the programme illegal. But it did rule the ECJ failed to adequately reconcile the limitations of the ECB’s mandate and the parameters of the PSPP.

Additionally, it ruled the ECB showed no evidence of balancing the use of QE, to reach its target inflation rate of 2%, against some of the adverse side effects. The court highlighted losses for private savers as one negative consequence and argued this had profound implications for economic policy areas reserved for German institutions, such as the budget.

For these reasons, the German Constitutional Court instructed the German to ensure the ECB conduct an assessment justifying the programme against these adverse effects.

To apply pressure, if no assessment by the ECB in three months, the court decreed the Bundesbank (Germany’s central bank) could not participate in the programme and would have to sell any government bonds purchased under the programme. If that came to pass, the programme would be dead in the water.

Moreover, if we follow the logic of the German Constitutional Court’s reasoning to its logical conclusion, serious implications emerge:

The graph below depicts the yields of the German and Italian 10- year bonds and their movement over the last few days. The tine-period on the x-axis reflects intervals or around 45 minutes. What we can observe is that German bund yields are lower. Lower yields reflect the fact investors consider German bunds less risky than their Italian equivalents. In fact, German bunds are considered so secure the yields are negative, meaning investors are willing to pay the German government for lending them money.

From the right-hand side of the graph, we can observe a rise in Italian bond yields to nearly 1.95%, just after the announcement of the German Constitutional Court’s decision. At the same time, the yield on German 10-year bunds fell further into negative territory, reaching -0.60%. The difference between the yields, known as the spread, has increased to 2.52% as can be seen in Graph 3 below. 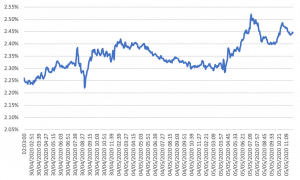 The jump in the spread displays the ruling was unexpected. Moreover, it highlights how investors are viewing the acute negative consequences for less fiscally secure states, such as Italy.

With a stay of execution for three months, the legal minds at the ECB must now find a creative solution that satisfies the qualms of the German Constitutional Court. Doing so is no small task and will occupy a significant proportion of ECB leaders’ time during a period of intense economic strain.

Increasing scepticism regarding the Euro within Italy and other southern states has grown, and European treaty change is necessary to reconcile nation-states’ laws with EU economic policy.

While the German ruling is a blow, brinkmanship has played out before our eyes in the past. It may seem cynical to suggest a fudged solution will emerge at the 11th hour, but this has been the reaction of the EU institutions and member states to the various debt crises emerged over the last decade.

For now, the ECB has three months to satisfy the sceptical German Constitutional Court, which is plenty of time for the emergence of a policy fudge for Europe.