Finally, 1645 days after the referendum vote, the Brexit saga has ended. After years of stuttering negotiations and political deadlock, two general elections and a global pandemic, UK and EU negotiating teams agreed a legal framework last week to govern the vast £435 billion cross-Channel trade in goods. Unquestionably, the agreement is positive news and a welcome end to the Brexit process.

We delve into the headline announcements, before turning to the reaction of markets and the implications for future EU-UK trade.

The legal text governing the agreement is over 2000 pages long, so we have distilled the key points of the agreement below, including the most contentious areas of the negotiation.

Perhaps the most significant element of the deal is the tariff-free access granted to both UK and EU businesses to each territory’s respective market. Tariff-free access is, for both UK importers and exporters, an objectively virtuous basis for trade. Remember tariffs represent taxation on consumers, with businesses typically passing on costs to their customers to protect margins, by increasing prices.

However, trade will not be completely frictionless. To gain access to the single market, UK exporters will have to evidence that goods entering the EU are compliant with the EU’s regulatory standards (and vice versa), in the form of checks at entry points.

Overall, this will raise costs and time for goods exporters and importers on both sides of the channel but can be managed to reduce friction.

Despite representing limited economic value, the question of EU access to UK waters consistently acted as a stumbling block in negotiations. However, negotiators arrived at a compromise which will see EU fleets’ quotas of UK fish fall by 25% in a phased approach over 5.5 years. At the end of the period, fishing rights in UK waters will be subject to an annual negotiation.

Another of the controversial and difficult components of the discussion. This sought to determine how the UK and EU will manage different standards on goods if the UK diverges from the regulatory alignment it currently has with EU member states. The agreement will see both sides able to impose tariffs but crucially these must be agreed by an independent arbitration panel.

One of the greatest sticking points throughout the negotiation centred around the role of the Court of Justice of the European Union (CJEU) in arbitrating any future legal disputes centred on trade. The reasons are quite technical, but essentially the CJEU is the EU’s foremost legal authority, and according to EU treaties, the only body capable of ruling on any legal dispute related to the functioning of the EU.

EU insistence on this point by its negotiators was always hard to justify given the UK was destined to leave the EU after the referendum, at which point the treaties would cease to apply. It was also anathema to most Brexit supporting MPs, including most of the Conservative party, guaranteeing failure for any deal which included a role for the Court.

In a significant win for the UK’s negotiating team, legal disputes between the UK and EU will be resolved through arbitration, as is common in almost all other trading agreements.

The EU and the UK’s trading relationship also comprises a vast amount of trade in services. Indeed, the UK has consistently operated a trade surplus with the EU in services, with the total value between the UK and EU was nearly £125 billion (42% of the UK’s exports to the EU in 2019). The deal agreed last week covers trade in goods only, with the parties likely to roll over the present terms governing trade in services as a temporary stopgap.

Ultimately, the EU may retain control of how the UK services businesses access the single market, by granting ‘equivalence’ status. Ultimately, this means the European Commission (EC) determines how closely British rules around banking and other services industries align with those operating in the EU.

However, the EC can, at short notice, unilaterally withdraw equivalence if they determine a trading partner’s rules deviate too much from its own. We expect the UK government to press for a new agreement that lengthens the notice period for equivalence withdrawal and seek a clear framework outlining specific breaches that could trigger such action.

As you might expect, the market reaction to news of the deal was distinctly positive. Graph 1 below displays the first of these signals, showing the reaction of Sterling against both the US Dollar and Euro on the morning of Christmas Eve.

Sterling has endured a torrid few years, wildly fluctuating according to the prevailing dynamics of the negotiations. After it dropped to a 34 year low against the dollar last year, former Bank of England governor Mark Carney suggested the currency was performing more like an emerging market currency.

However, as the graph below suggests, the conclusion of a trade deal could allow sterling to regain some of its former, as Brexit uncertainty finally recedes from view. On the morning of Christmas Eve, Sterling jumped to over $1.36 and €1.12 respectively as investors reacted with enthusiasm to the deal. 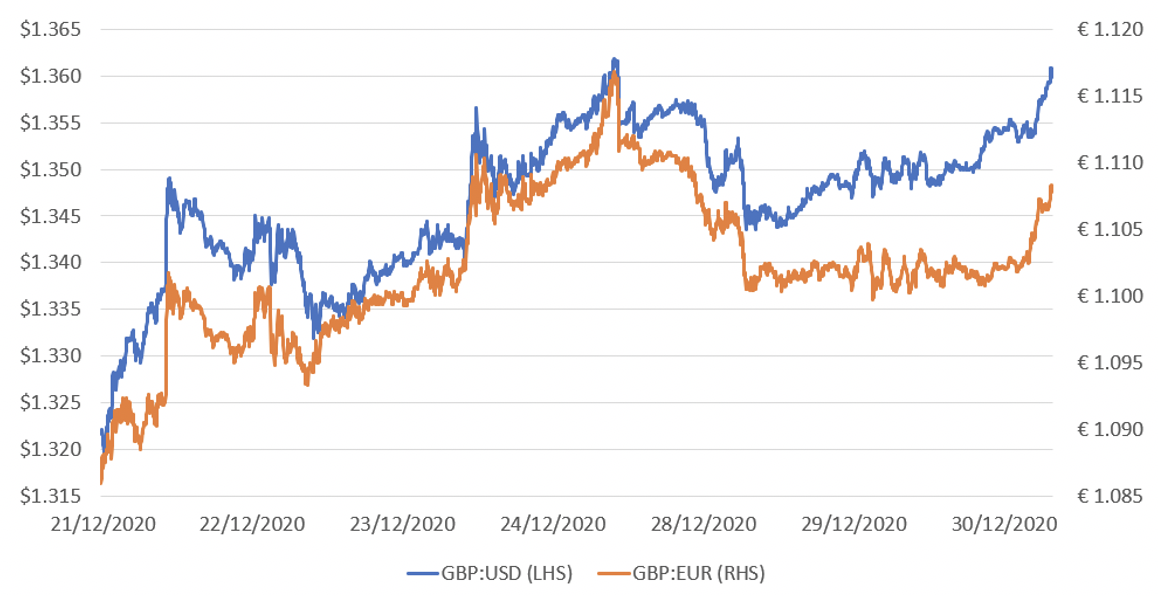 However, Labour look likely to support any deal and, with the Herculean efforts of European Negotiators to arrive at a deal, the agreement should ultimately pass and become a full international treaty.

At various points during the last four years, the positions of both the UK and EU appeared unreconcilable. However, crucial political compromises were made during the final days of negotiation, making space for negotiators to agree the technical details to underpin the UK’s most important trading relationship.

Ultimately, both sides will claim victory, but political leaders in the UK and EU have made accommodations at pivotal moments and utilised leverage effectively to gain concessions in other areas.

Businesses on both sides of the channel can now operate with more certainty, allowing investment plans to be considered. Meanwhile, with the UK seeking to forge trading relationships with new partners, the conclusion can allow the UK government to refocus energy on leveraging the greatest opportunities possible from Brexit.