Home Our BlogHong Kong – Rising To The Tech Challenge!
Share this page

For the titans of the banking world in Hong Kong, complacency is no longer an option. In the last few weeks the Chinese authorities have thrown the proverbial cat among the pigeons by granting digital banking licences to giants of the Chinese technology world. Big tech names such as Tencent, Alibaba and Xiaomi, firms noted for their success in disrupting traditional markets, will soon sit alongside recognisable bank incumbents including Standard Chartered bank and HSBC.

Today the banking sector in Hong Kong is dominated by the four main institutions mentioned below. They have access to a pool of 7.7 million residents and have been extremely slow to adapt financial technology (fintech) to suit their customers’ needs. 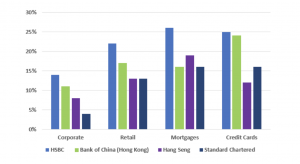 According to market research by Accenture, 47% of customers in Hong Kong are dissatisfied with banking services, complaining mainly of clunky technology. The comparative figure here in the UK is 22%, the UK having developed faster in response to competition from ‘challengers’ in recent years.

The poor state of fintech in Hong Kong sits at odds with the former UK colony’s progress toward becoming a ‘smart city’ i.e. connecting the government, business and citizens with technology at the centre. This is the case despite financial regulators setting up working groups back in 2016 aiming to encourage banks to adapt their longstanding business models. Unfortunately for them, having been slow to adapt first time around, the regulator is opening the market to greater competition. This will be fascinating to observe, not just in terms of how this plays out in Hong Kong but for banking globally.

The tech companies making the challenge are innovative, have significant financial resources and do not have the baggage associated with outdated technology to slow them down. With a large user base already in place they are in a strong position to make their presence felt across Asia.

The technological revolution in financial services is well underway everywhere. For Hong Kong, as a gateway to China and beyond, the opportunity is huge. Efficiencies in financial systems are central to economic growth and not adapting now risks failure in the future. It seems that message is heard loud and clear in Hong Kong and traditional banks find themselves in the firing line.