How True Potential did more in 2019

At True Potential, we are passionate about helping you to do more with your money, and we are thrilled to see so many happy clients in 2019.

We had a strong start to the year, with the completion of our new and enhanced investments and pensions Platform. The successful migration of clients to this new Platform resulted in True Potential winning the ‘Best Use Of Technology’ award at the Schroders UK Platform Awards 2019. Judges recognised our success in completing a major Platform migration project in house, successfully, and on time. 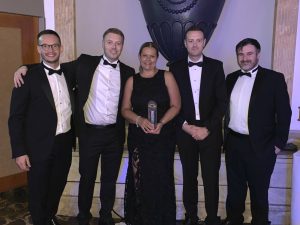 In April we reached another milestone, as the True Potential Portfolios powered through the £6 billion barrier. During 2019, we have added an extra £2 billion onto the Platform, which means we have passed the £10 billion mark for assets on our True Potential Platform – a 25% increase over the year.

Our successes have been recognised within the investment community. True Potential Wealth Management has been voted the nation’s most popular advice firm. The VouchedFor 2019 Guide to the UK’s Top-Rated Financial Advisers, as printed in The Times, detailed 53 True Potential Wealth Management advisors, who were singled out for special commendation, with the highest volume of positive reviews in 2018.

One of the things we are most proud of in 2019 is our commitment to charity.

In July, we welcomed Justine Greening MP to True Potential’s Head Office, which played host to the first ever North East Social Mobility Summit. Alongside True Potential Chairman David Harrison, Justine founded the Social Mobility Pledge, with the aim to encourage employers to work with local schools and colleges to offer apprenticeships and adopt open recruitment policies such as name-blind or “contextual” recruitment. Over 300 organisations have signed the Pledge, including Vodafone and Marks & Spencer. Over 2.6 million employees are now covered in the UK. The North East Social Mobility Summit launched the ‘Pathway To Progress’ report, while True Potential staff fundraised over £15,000 for social mobility charities in a ‘Kick For Cash’ tournament. True Potential matched this fundraising sum, increasing the total raised to £30,000. 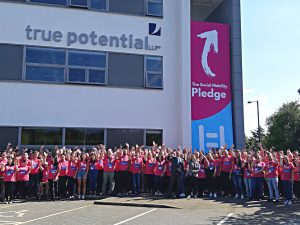 In August, we supported the World Transplant Games 2019, sponsoring the Athletics events at Gateshead Stadium. This was a thrilling sporting occasion, which also raised awareness for the need to have the conversation with your family about the reasons for being registered as an organ donor. 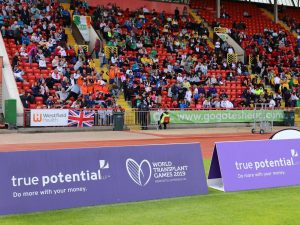 Also on the athletics front, we supported Team Mini Sunshine in the Mini Great North Run, which saw some of the North East’s most inspirational kids run, walk or wheel their way to the finish line of the 1.5km route. David Harrison, True Potential Chairman, said: “The Mini and Junior Great North Runs always send out a strong message that whatever your personal circumstances may be, you can still be the best version of yourself by taking part, competing and achieving your personal goals.”

Towards the end of the year, we adopted an Elmer. St Oswald’s Hospice’s ‘Elmer’s Great North Parade’ saw various Elmer artworks stationed in iconic locations across the North East, and we were delighted to acquire the Landmarks Elmer at St Oswald’s charity auction. Landmarks was previously on display outside Newcastle United’s St James Park.

We finished the year by donating £15,000 to Metro Radio’s Cash For Kids campaign, in addition to becoming an official drop off point for those who want to donate gifts for those kids in need this festive time.

It has been a truly fantastic year at True Potential, made successful by the simple philosophy to ‘Do More’ whether this is in our products, for client service, or charity. Thank you to everyone involved who has made this a year to remember.