Before we get to our main topic, it is worth recalling the subject of our last article. Just after the article was published, finance ministers of the Euro Zone agreed a rescue package worth €500 billion for European countries most adversely affected by COVID-19. We suggested this would happen but feel more relieved than pleased about calling this correctly.

Turning now to our analysis of what is happening in oil markets, we start with a quote. According to Mark Twain, “Too much of anything is bad, but too much good whiskey is barely enough”. Donald Trump, on the other hand, seems to think that ‘too much oil is bad and too much oil at low prices is terrible’ (not a direct quote). Urged on by The Donald, the world’s major oil-producing states agreed this week to cut to their respective rates of production.

The United States government needed to act to stymie excess oil production and raise the commodity’s price because of the precarious state of US shale producers. They rely on higher prices to cover their more expensive extraction costs and desperately need a floor under rapidly falling oil prices.

Shale oil has, in recent times, revolutionised the supply landscapes of international oil markets. As of the end of 2019, the US accounted for around 19% of total global oil production, outstripping Saudi Arabia and Russia. Estimates suggest that before the recent collapse their share of supply has doubled since 2010

Graph 1: Rates of Production of Leading Oil Producing States, as a Percentage of Global Total. 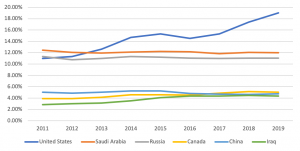 Source: US Energy Information Administration, data as of 31st December 2019

The US is now the world’s primary oil-producing nation, paying strategic dividends. However, as mentioned, their security in oil relies upon capital intensive methods of extraction and the oil price collapse experienced over the last five weeks undermines the financial viability of many US shale producers, who are typically highly indebted.

The causes of the downward pressure exerted on oil prices will be familiar to all by now, but it is useful to provide a recap. The reason for the dramatic price falls twofold. Firstly, global oil demand has fallen as most major economies have been placed in lockdown at various stages over the last few weeks. Secondly, the failure of a previous negotiation between the Saudi-led Organisation of Petroleum Exporting Countries (OPEC) and Russia led to a vast increase in supply as Saudi Arabia sought to erode Russia’s share of the European oil market.

Because of the twin-shock, a supply-side driven rebound in the oil price will only occur with appreciable cuts to production. It is therefore unsurprising the terms of OPEC + (comprising the 13 members of Saudi-led OPEC and Russia) agreement represent the most significant cut to global oil production ever seen. Beginning in May, 9.7 (or, almost 10) million fewer barrels of oil will be pumped per day, representing 10% of total global oil production.

Other major oil-producing states that are not members of OPEC+, such as the United States, Norway, Canada and Brazil, are expected to follow suit, trimming global oil supply by a further 10 million barrels per day. The combined effect is an unprecedented 20% slash to production from current levels.

The initial market reaction to OPEC+ cuts was positive with oil prices rising by 3.68% in early trading. However, as Graph 2 displays, this initial surge was short-lived with closing prices tapering falling by nearly 7%.

Graph 2: Daily Percentage Change in the Price of a Barrel of Brent Crude. 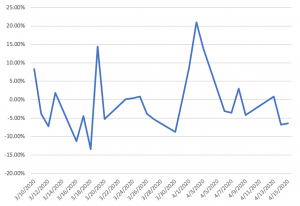 The question to be asked is, why are oil prices struggling to find a floor?

The restrictions placed upon households and businesses across the globe have been disastrous for oil demand, most acutely observed in transport. Road travel in the UK alone has fallen to 1955 levels, and UK air traffic in April fell by 90% year on year, leaving fuel consumption decimated.

Demand destruction for the commodity is vicious right across the globe. According to the International Energy Agency’s (IEA) Oil Market Report, final world demand for April 2020 is projected to be around 30 million barrels per day lower than the same period in 2019. Additionally, the IEA estimates the total global appetite for oil is now at levels last seen in 1995 when the global economy was around 50% smaller.

Despite cuts to production, a large gap between levels of demand and supply will persist over the short-term, evidenced by projections of global storage capacity filling up. Stockpiles have risen for the eleventh week in a row. Some fear that there will soon be more oil than storage available.

Low oil prices are a boon to the global economy and an unmitigated positive. Cheaper oil means lower input costs for businesses due to comparatively lower fuel costs. But, a second-order effect of suppressed demand is lower revenues for governments in oil-consuming economies. The effect of lower prices will likely be more limited than previous occurrences, as levels of global consumption are depressed due to lockdowns.

Petrol and Diesel prices are an amalgamation of costs, the most significant of which is taxation. In the UK, fuel duty and VAT account for around 70% of a litre of petrol based on current prices. In the short term, lower levels of fuel consumption equate to reduced revenue, but tax revenue will rebound once demand returns.

Supply-side induced cuts will likely be ineffective in the near term, but as demand returns, lower supply will aid reductions in inventories. As ever, history is instructive. For much of the 1980s, the world experienced similar glut and depressed prices, with oil prices falling to around $10 a barrel by 1986. However, a resurgence in demand brought down inventories and stabilised price levels, eventually finding a new equilibrium.

It is unclear how long it will take for an equilibrium price level to become established in 2020 and producers may experience some ongoing pain. However, for consumers and businesses with input costs based on oil, low oil prices are good news. This will be evident after economies emerge from COVID-19 induced lockdowns. The current glut and high inventories will take time to unwind, keeping prices low and reducing business costs, providing strong tailwinds for economic activity.