Early in April we flagged the start of India’s mammoth general election. The election represents the largest in the world by population, with 900 million eligible voters. The vote elects parliamentary members for the lower house, or Lok Sabha. Winning 272 seats is required to gain a majority and take control. For the past five years the Bharatiya Janata Party (BJP), led by Prime Minister Narendra Modi, had been the ruling party.

Last week the final votes were collated and tallied. The outcome handed Mr Modi an historic land-slide victory and is a huge endorsement of him personally. The turnout at 67% was high.

The BJP won 303 seats and the Indian National Congress (INC), one of India’s oldest parliamentary parties, came in second with 52 seats. 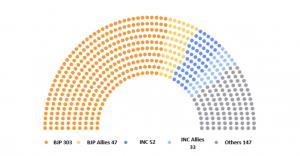 The decision to re-elect the BJP is very significant for India’s future. A successful economy will grow faster and surpass the UK economy to become the fifth largest in the world. This matters a great deal politically and economically. Greater size emphasises India’s position as a key player on the global stage. It also means that what happens in India will contribute meaningfully to global growth dynamics.

Population wise India is also gaining momentum, especially over its near and larger neighbour. In the next ten years the current population of 1.34 billion is expected to exceed China’s, which currently stands at 1.39 billion.

Mr Modi has a further 5-year term to press on with his goal of building a ‘New India’. Within this paradigm he is aiming at;

Previous successes include increasing foreign direct investment, improving transparency, and reducing corruption, but one of the greatest challenges will be tackling problems related to India’s large agricultural industry. This sector contributes roughly 16-17% of India’s Gross Domestic Product (GDP) and employs almost 50% of the total workforce. In recent years it has suffered from droughts, higher costs and falling crop prices. A keynote election promise from the BJP was to double farm incomes by 2022 whilst implementing a pension scheme for small-to-medium sized farms, a promise that will not be easy to fulfil.

Nevertheless, the BJP’s rhetoric won support from both the working class and investors alike. India’s main stock market, the Nifty 50, began a steep incline on early election forecasts, culminating in a 6.16% rise over 4 days, indicated below. The sharpest rise in over 3 years.