Born in 1902 the American philanthropist W. Clement Stone once said, “You are a product of your environment”. One imagines Mr Stone had his views shaped in the harsh reality of human conflict inflicted by two World Wars. His observations from those difficult years, and those of his generation, have no doubt contributed to the prevention of a third World War. Moreover, the post-war generation, the so-called baby boomers, went on to build an economic system with global institutions producing far greater prosperity and guaranteeing security for a great many people; more than any previous generation.

Today, generations X, Y & Z begin to assume the role of leadership. In doing so their economic and social experiences are very different to those of Mr Stone’s generation and the baby boomers. In our primer below, we identify and explain some of the differences between each generation. The newbies, and successors to the baby boomers, are tagged by letters of the alphabet X, Y & Z – see chart below. They also have alternate descriptors, which we explain, and we finish with a focus on the tech savvy generation, Generation Z.;

Sometimes called Echo boomers or Millennials. Echo boomers are the progeny of the baby boomers whereas Millennials are so-called because they entered adulthood around the turn of the 21st Century. They all are, to an extent, pioneers of technology, tech aware and grew up in an age of increased consumerism.

They are the internet generation or iGens. They have had technology at their fingertips since birth, but their experience encompasses a much less certain economic environment – see chart below. 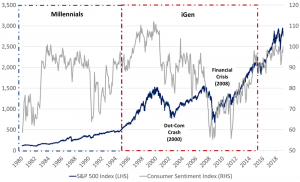 There are several aspects separating Gen Z or iGen from Gen X; aka Millennials. For a start they are new into the labour market and building their share of experiences across the social sphere. More qualified than their parents, and older siblings, 50% of Gen Z will enter the labour market with a university degree; compared to 25% for Millennials.

Gen Z experienced two significant financial downturns – see chart above – making them potentially more aware of the behaviour of financial markets. By 2020 they will comprise 40% of total consumers in the major economies of US, Europe, Brazil, Russia, India and China. This new generation will do so with memories of the stress a contracting economy can place on households, having heard about this from their parents.

Having grown up with technology at their fingertips Gen Z have greater levels of resilience in relation to tackling anything new relating to technology but may struggle more with social communication. The want to be more entrepreneurial – iGen’s are expected to produce 55% more entrepreneurs than is the case with Millennials. Approximately two-thirds of Gen Z in school today say they would like to start their own business.

In a world full of accessible information, the iGen’s see opportunities for self-improvement, can multi-task and can communicate very quickly on a global scale. They will spend their working lives exposed to numerous technology platforms.

The picture building is of a generation with great potential to shape and change society, they will innovate using technology to speed things along. This presents a challenge for big corporates who will need to think very hard about how they might respond to this seismic shift, and how to accommodate the demands of Gen Z.

It is telling that 60% of Generation Z want to make a difference in the world compared to less than 40% of Millennials. They will shape things differently in the years ahead- of that there is little doubt, exciting when you stop and think about it for a moment.