Moving On From Furlough

Home Our BlogMoving On From Furlough
Share this page

The historic government furlough scheme is at an end. The number of people employed in the UK has risen and figures released by the Office for National Statistics (ONS) provide hard statistical evidence that the labour market coped extremely well with expiry of the wage subsidy scheme. In its final weeks the million or so workers getting support are now being absorbed back into the labour market.

According to Chancellor Rishi Sunak the jobs data is “testament to the success of the furlough scheme”. However, and from a purely economic standpoint, some argue the scheme should have ended sooner to help head off looming labour shortages. Critics also say this would have restrained the burgeoning budget deficit. 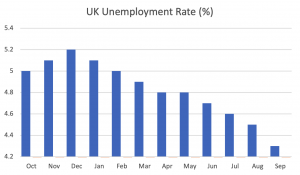 Job vacancies in the UK recently hit a record high of 1.172 million. According to the ONS job to job moves accounted for 979,000 of the vacant positions on offer, driven by resignations not forced dismissals (those resigning couldn’t be replaced). This supports the anecdotal view that the UK has evidenced a similar ‘wave of resignations’ also sweeping across the US: The common link being workers taking advantage of a buoyant labour market.

However, we shouldn’t forget that at the outset of the pandemic fear of mass unemployment was rife and of course suitably amplified by the mainstream media. However, they (the media) were wrong. The wave of hiring has spread to all sectors of the economy, albeit leaving some companies in some sectors struggling to find the staff to keep up with rising demand.

Amongst the industries with the highest level of vacancies is hospitality, employing nearly 1 in 10 of the UK workers. Latest official data show 134,000 unfilled posts and 40% of hospitality employers reporting staff shortages, months after reopening. The hospitality sector is second only to health & social care with over 172,000 vacant roles; although studies show the latter sector also had the highest vacancy rates prior to the pandemic.

What Could Have Been?

It is impossible to ignore a glaringly obvious fact about labour shortages. Employers desperate for staff were having to contend with a million workers still tied up on furlough i.e., being paid to do a job they were not doing while not being allowed to take up alternative employment. Despite this being the root cause, the finger of blame was directed at Brexit and Covid-19 – that said overseas workers did return home in large numbers to be close to family rather than be isolated during lockdowns.

Aside from the shortage created It is left to our imagination as to how much extra economic growth could have created by a labour source been freed up earlier. It certainly would have saved the economy a huge amount of money. Overall furlough payments in September alone were in the region of £1.14bn!

Throughout this period the economic and social aspects have continuously bumped up against one another, making choices difficult and for some painful. And if we were ever in any doubt about unintended consequences of policy choices, we need only look at vaccination rates in the 18-34 age group. According to the ONS, workers in this bracket, and previously on furlough, are one of the socio-economic groups with the lowest vaccination rates. With many of them back at work again, and spending less time at home, they could now be more incentivized and likely to accept a Covid jab to lessen the risk of infection.