Negative Rates – For and Against

Home Our BlogNegative Rates – For and Against
Share this page

The economic contusions of COVID-19 led to policymakers implementing policy innovations to smooth economies’ paths out of recession. We recently outlined how the Federal Reserve had altered its inflation framework in a bid to promote sustainable levels of US inflation.

Recently, commentators in the UK have speculated on the implementation of extraordinary policy measures by the Bank of England. A consistent ebb and flow emanated from policymakers on the likelihood of the Monetary Policy Committee actively choosing to reduce interest rates below 0%.

This week the BoE issued a letter sent to UK commercial banks, asking if they can cope with negative rates and their preparedness. They have until November the 12th to respond. We assess the theory behind negative rates, what the policy means in practical terms and its trade-offs below.

Why Is It Being Considered?

As we know, interest rates are a vital tool central banks use to influence economies, depending on prevailing economic conditions. To curb inflation, central banks hike rate, thereby incentivising saving at the expense of consumption. Conversely, to stimulate demand interest rates are cut, boosting the incentives for expenditure by lowering the cost of borrowing for businesses and households.

In essence, the idea is to get money flowing out of banks and to kick start the economy. As the UK continues its rebound from its low point in the second quarter, one can understand why the BoE is exploring the possibility of negative rates. Taking rates to negative territory, in theory, should increase the incentives to borrow and spend instead of saving.

Graph 1 below reveals how household savings rates jumped during the second quarter of 2020, reaching a record level of 29%. The danger is if confidence remains subdued and savings undeployed form of consumption, the economic recovery will falter.

Source: Office for National Statistics, data as of September the 30th 2020

For commercial banks, the implications are quite profound, which is the reason for the consultation. High street banks typically get paid by their central banks for depositing money with them. Their so-called surplus reserves.

However, if implemented, negative rates could lead to the penalisation of commercial banks for holding excess reserves, forcing them to lend more or to pass this additional cost on in some way to customers. In theory, the cost pass-through from central banks to high street banks means some customers are likely to be charged for depositing money with the bank.

The evidence from countries that have negative rates, Eurozone, Japan, Sweden, Denmark and Switzerland – is mixed. In some cases, it is only institutions, or those private savers with higher balances that are paying the price. Generally, savers receive zero interest on their deposits.

According to the media, most UK high street banks are not keen on this policy option and have said so publicly, due to the implications for profitability. However, others believe they can still earn a return that is higher than their cost of capital, albeit some are better placed than others to optimise profits.

If I Have a Mortgage, Will I Get Paid by My Bank?

Probably not in the way you anticipate. For trackers, the rate will fall to zero, and if negative rate mortgages appear, then you should expect higher costs and fees. The negative rate is likely to be passed on in the form of a reduction in the capital sum, but the chances are the banks will still receive something from the customer. They usually find ways to levy charges, and this time will be no different.

Unfortunately, there is no clear evidence that a negative rates policy works. Negative rates in themselves are an admission that an economy is struggling to match levels of growth that are consistent with sustainable price rises. In many instances, economies with negative rates are flirting with deflation, with Japan being a prime example.

Economists cannot remove themselves from an implemented policy and judge if the economy would be better off without it. Some economists argue that if it is less profitable for banks to lend, they end up restricting the supply of credit. The restriction, in turn, ends up being bad for the economy, hurting businesses and the housing market.

According to some studies, the European Central Bank’s experience of negative rates did lead to falls in loan growth. Graph 2 below neatly displays this phenomenon by depicting the % change in total loan growth of the Euro Area in the years after the negative rates policy rate was put in place. We can see that after an initial increase, loan growth rate collapsed in subsequent years. 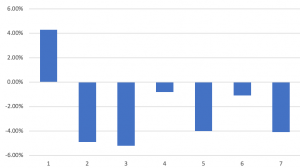 Source: Federal Reserve Bank of San Francisco, data as of September the 28th 2020

Therefore, we can say that implementing a policy of negative interest rates does not necessarily lead to increases in lending and may, in fact create poor incentives for commercial banks, exacerbating any underlying weaknesses.

Also, negative rates may send negative signals to savers and lead them to be even further caution. The thinking here is that if prices aren’t rising, savers will hoard cash as they feel there is no need to rush out and spend. Also, if they charged for depositing money, consumers will hold cash outside the banking system, further inhibiting central banks’ efforts to loosen the economy’s money supply.

What have we established on the effectiveness of negative rates?

Overall, they seem to offer a short-term boost to lending rates, but the effect diminishes over time, and disincentivise commercial banks from making loans.

Banks will cope, but savers will face a hit, especially those with more considerable sums.

It isn’t particularly desirable to have to implement negative rates, but the pandemic has brought forth a need to consider all possibilities.