The General Election campaign continued this week with several of the parties officially releasing their manifestos. Therefore, we have analysed some polling data to give a poll of polls, which shows a weighted average of polls carried out by 11 polling organisations. Graph 1 below shows the results: 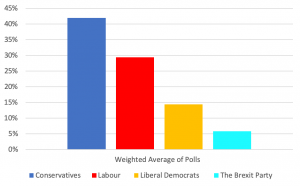 The Conservatives have maintained their significant lead ahead of the chasing pack and are yet to release their manifesto. Whether the manifesto pledges released by the other parties will change the current dynamics remains to be seen, but manifesto launches can buttress or undermine an election campaign.