China – A Strong Start To The Year

Growth was boosted by an increased level of demand, with industrial output increasing 8.5% from one year ago. This is the fastest level of growth since 2014. Retail sales were also up 8.7%. Good news for the economy, but less so for President Trump who has been targeting China. Trump wants to limit China’s global leadership as a manufacturing exporter, and to demonstrate evidence of this in advance of the 2020 US presidential elections.

Whilst easing tensions between the two nations have had a positive contribution on the Chinese stock markets (up 36% year to date in Sterling terms) and on the health of the underlying economy, the pickup is believed to be largely the result of government support. Government officials recently announced plans to increase lending from the state banks by $867 billion to channel liquidity into the real economy. This gives businesses greater access to finance to stimulate investment.

Business confidence, as measured by leading indicators such as the Purchasing Managers Indices (PMI), also picked up in March. Manufacturing is now reflecting expansion for the first time since October 2018. This has significant meaning for the economy as 41% of GDP is made up from the manufacturing sector. The PMI data also shows the service sector remains in expansive territory, above a neutral level of 50.

Growth in China has been slowing for some time but from very high and unsustainable levels. The government is pushing to prevent a sustained slowdown in growth through fiscal intervention. What is clear is that turning the second largest economy in the world (by GDP) can take time, but something is stirring. 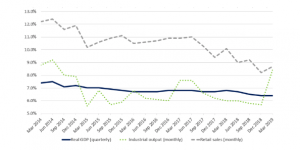 Turning Off The Taps

The adage that oil makes the world go around is not far from the truth. Crude oil is a key input in a plethora of products and it underpins global prices of many goods.
Turning Off The Taps

So why the sudden price volatility and price rise? Well simply put, supply amongst member countries has plummeted; the law of supply and demand dictates that ‘as the supply of a good decreases, its relative price increases’.

An array of idiosyncratic issues explain why the supply has been siphoned off e.g. output from Venezuela has been in freefall following the on-going economic and political instability; Iran, Libya and Algeria, who are currently experiencing tighter sanctions, on-going conflict and political unrest are not contributing to supply.

However, arguably the biggest impact is from Saudi Arabia who account for almost one third of OPEC’s Crude oil production. In the face of falling oil prices in December, Saudi Arabia reduced their output by more than 1 million barrels a day (b/d), the equivalent of shutting down the UKs entire Crude Oil production. Reductions amongst Opec members has pushed the supply of oil below estimated global demand and this could push prices even higher, perhaps up toward $80 a barrel this year.

What could this mean for the global economy? Well it could lead to an uptick in inflation. However, the determinants of inflation are incredibly intricate. There is a strong correlation between the rise in Crude Oil prices and inflation but it tends to operate with a lag. Therefore, the impact may not be instant, if at all. Moreover, companies may choose to absorb the increases rather than pass them along.