Home Our BlogResilience, Efficiency and Trade Volumes
Share this page

The acceleration in trade liberalisation as the 20th century merged with the 21st stems from the collapse of the Soviet Union. Previously closed economies integrated into the global system. China’s ascension to the World Trade Organisation ten years after the end of the Cold War was hailed as another step in the unrelenting progression of globalisation.

But, since the middle of the 2010s, scepticism about the virtues of Free Trade and globalisation have grown. With hindsight symptoms of this scepticism are easily recognised; the failure of proposed multi-lateral trade deals between the US, the EU and Pacific economies, and the election of Donald Trump on a platform of ‘America First’ and tariff imposition.

The attitude of US citizens in all this is relevant. They have been the primary beneficiaries of cheap goods manufactured abroad and, in a poll conducted last year, almost 87% of Americans believed international trade was positive for the US economy, an increase of 28% from 2016.

Graph 1: US attitudes to Free Trade 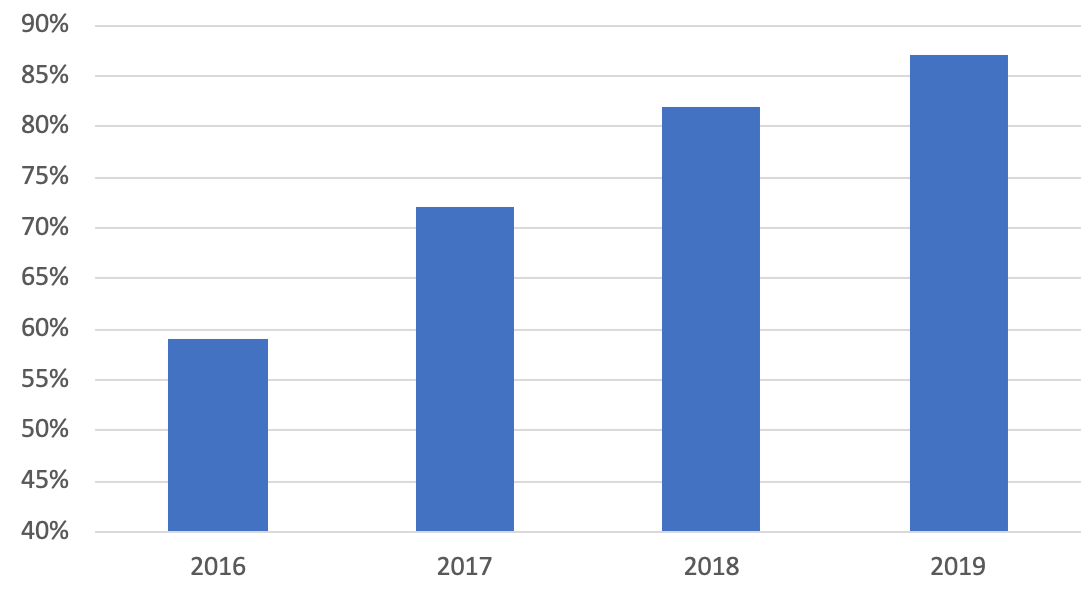 How will this push and pull work out in the long term?

To give some insight, we look at hard data. We examine how global trade volumes are faring now and how they have fared over time. One point we should make clear is that volumes are very different from the value of trade. The value of trade reflects the pricing of goods, whereas volumes represent movement and activity.

Graph 2 presents a picture of quarterly Global Trade volumes over the last twenty years. The graph depicts strong long-term growth, but we can see immediately how badly trade volumes fared during the second quarter of 2020. The index, which indexes trade volumes in 2010 at 100 for comparative purposes, fell from 122 at the end of February to 102 by May; effectively erasing ten years of volume growth in just three months.

We now know, of course, that the spread of the virus to the West massively disrupted transportation of finished and component goods. Likewise, the economic pressure exerted by lockdowns led to capitulating demand levels for goods across much of the global economy.

This bad news story isn’t entirely over, but it looks to be mostly behind us. An upsurge is underway. Trade volumes in the final month of the second quarter, as depicted on the right-hand side of the graph, registered a rapid upturn in June. That said we must be mindful that even after June’s strong rebound, trade volumes are just over 10% higher than ten years previously, using index values. 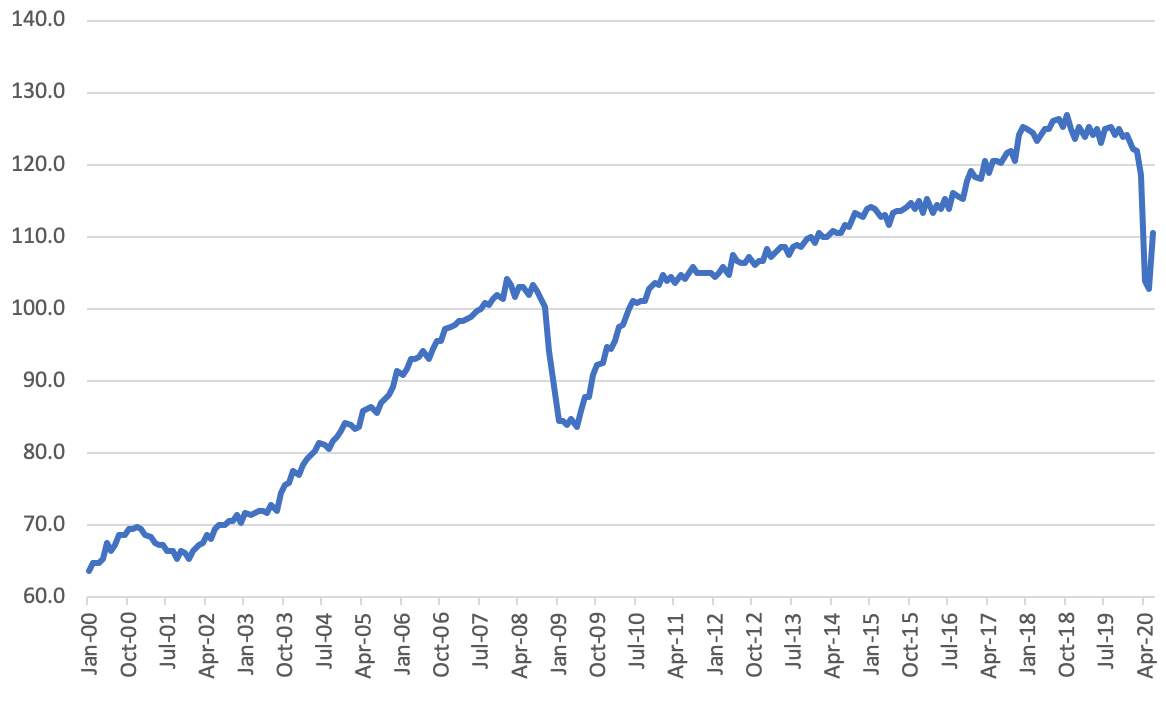 To obtain a more granular view of the recovery, we look at the data monthly. Graph 3 depicts the sharp retreat each month during the second quarter, and the resurgence in trade flows occurring between the end of May and June. 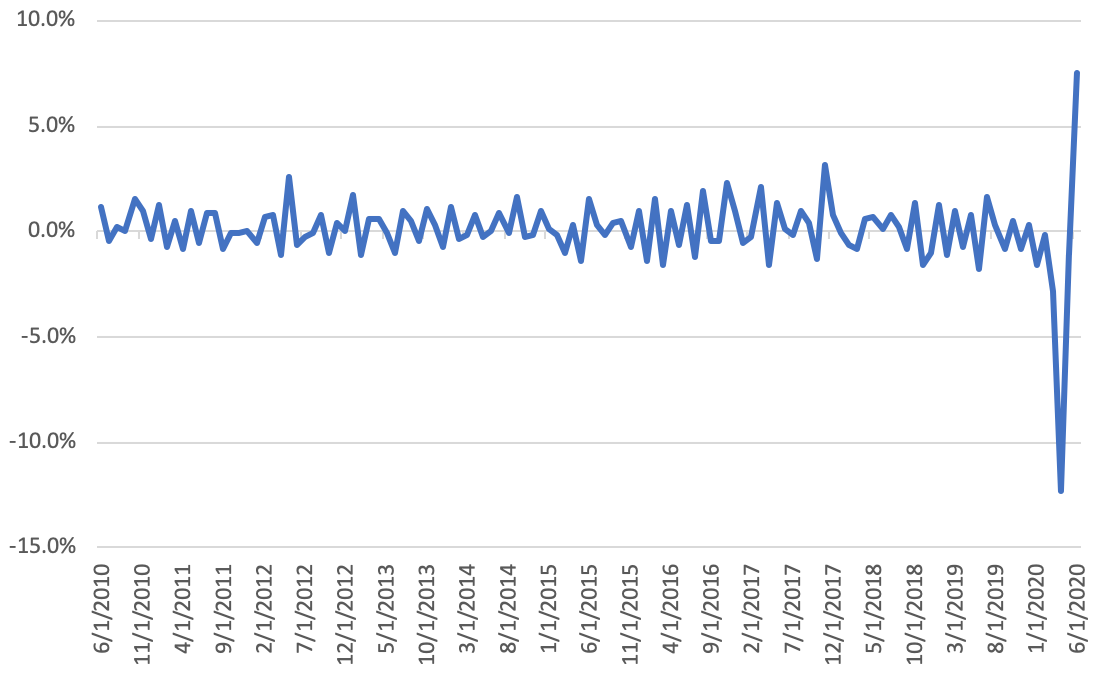 What conclusions can we draw?

Increasing global trade volumes indicate demand for goods rebounding in some parts of the global economy. Moreover, high-frequency data pertaining to shipping container traffic released on Tuesday displayed a sharp rise in July, indicating momentum is beginning to build ahead of the third quarter.

The recovery is positive news because the World Trade Organisation (WTO) previously predicted global trade flows could collapse by 30%. Their amended forecast suggests a fall of 13%. Consequently, we are no longer looking at an outcome that compares with the collapse in trade during the Great Depression.

At the core of this debate is a choice between efficiency and resilience. The lockdowns imposed to contain Covid-19 exposed both the intricacy and vulnerability of global supply chains. A need for security of supply counterbalances perceptions about efficiency gains from globalisation. Previous natural disasters created local difficulties for specific sectors and countries, but the pandemic dispersed the negative economic implications globally.

Company managers and governments are now asking themselves ‘how can we achieve a balance between the efficient production of goods without compromising resilience?’

We are already beginning to see the effects of these preoccupations, affecting economies globally. The largest beneficiary of the race for lower costs of production over the last thirty years is China. Global trade in intermediate goods that originate in China is around 20%, a vast increase from 4% in 2002. This increase indicates the scale of China’s integration into global value chains and its transformation to an economic powerhouse.

However, China’s share of global exports is under increasing pressure. It has recently fallen year-on-year partly due to burgeoning hostility between the US-China, but the pandemic has undoubtedly played a substantial role in exacerbating recent declines.

Conclusions to be drawn