Roll out the barrel

Home Our BlogRoll out the barrel
Share this page

A closer relationship between OPEC and non-OPEC producers, including Russia, has seen the price of oil rise well above $71 per barrel (West Texas Intermediary – WTI) in recent months. Having suffered the effects of a squeeze in production earlier in the year, the US and other key oil importers have started to pressure oil producers into increasing supply by suggesting price caps and other alternatives to stop prices rising. Higher oil prices lead to lower disposable incomes after fuel expenses which means domestic consumers then have less money to spend on other products which slows economic growth.

In order to reduce the oil price and avoid potentially damaging price caps which could put a ceiling on profits, OPEC and its allies have agreed to ramp up production up to 1 million barrels a day with an aim to keep price, supply and demand broadly on an even keel.

An increase in output levels was expected before the meeting. Brent oil fell 7.6% over the month prior to the meeting but spiked 3.0% on the day, as the increase in output was not as significant as Trump and city analysts had hoped for. OPEC was not deliberately trying to engineer persistently rising oil prices when it decided to cut production a year and a half ago but unexpected outages in Venezuela and the US re-imposing sanctions on Iran have combined to push prices higher than expected. 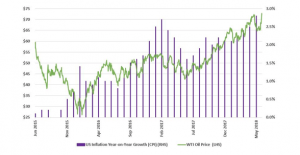 The decision by OPEC to open the ‘oil tap’ has raised questions around how increased production quotas will be distributed amongst its members bearing in mind that Iran, OPEC’s 3rd largest producer, is facing sanctions from the US and is at risk of losing market share as other OPEC members benefit from an increased production allowances.

The oil price is a highly sensitive subject impacting business right through the supply chain. OPEC members, primarily net exporters walk a tightrope, befitting from elevated prices but conscious that there is a tipping point where high oil prices can reduce demand and spur investment into alternative and renewable energy sources.