Home Our BlogRopec V the shale bonanza
Share this page

A closer relationship between Russia and the Organisation of the Petroleum Exporting Countries (OPEC) over the last two years has been one of the factors helping keep oil prices high at a time when shale oil has introduced more supply to the market. Both parties are aiming to forge a permanent alliance to create a super-cartel, hence the new term “ROPEC”. At the same time the US shale industry is acting as a massive disrupter, creating an intense dynamic across oil markets.

Between 2011-2014 oil (Brent Crude) traded at around the $100 p/b. Since those heady days traditional oil companies and countries have faced growing competition from new oil sources, such as US shale oil. Shale producers can respond quickly to rising prices. Oil fracking (hydraulic fracturing) can ramp up capacity quickly, capturing market share and profits from conventional producers.

This threat was overlooked by OPEC and other oil players with new supply from shale contributing to an oil glut. Thus, prices fell by 75% in just 26 months to a low point of $27.88 (Brent) in January 2016.

OPEC was convinced that despite having their own profits squeezed, keeping oil production high would keep prices lower and drive shale oil producers out of the market. Their bet was that small shale businesses would fold and buckle because they would not be able to service their debt burdens. While some smaller scale business did go under, they were taken over by private equity groups and drillers with much deeper pockets. The sites were left non-operational but they did not go away. As soon as prices picked up production resumed.

To tackle this persistent supply issue, and the issue of low oil prices it causes, OPEC and Non-OPEC members agreed to cut production. This had the desired effect causing oil prices to recover to their current level of $66.18 per barrel.

Where are we now?

With oil prices rising and a production cut agreement in place until the end of 2018, more and more US shale oil wells are ramping up production again. The International Energy Agency indicated that US oil production this year may match the entire growth in oil demand from China and the rest of the world. Some commentators estimate that this will create a ceiling for oil prices whereby they will not surpass $70 p/b; even with non-shale production cut agreements in place by other countries.

“ROPEC” is now facing a dilemma: do they keep to production cut agreements and possibly extend them to 2019, or do they just let the agreement lapse so they can produce more oil capturing current higher prices to maximise income. The latter approach clearly risks oversupply and lower prices again. The big question is how fast demand for oil is growing on the back of improving global economic expansion. If growth in demand improves this will help all producers.

Forecasting the oil price is difficult. We know from experience that rampant energy prices act like a tax on consumers. Thus, moderate prices and moderate price changes are generally more beneficial for oil producers as consumers behaviour responds less aggressively. However, shale producers are expected to produce as much as they can for as long as they can because it is economically beneficial for them to maximise income. They know they can retreat from production if prices fall and remerge just as quickly if they rise. In this sense it is a very difficult time for the oil cartel.

It is becoming more evident that the new “normal” in terms of oil prices is not $100+ per barrel anymore, but there again, what can anyone really say with certainty about the oil price!

Oil Price ($ per barrel) and US Shale Oil Production 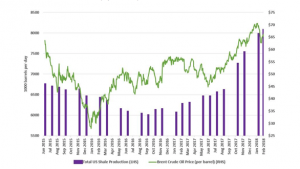