We have written extensively since March about the unprecedented monetary and fiscal measures enacted by policymakers. Vast spending has been essential to buttress respective economies against the economic headwinds created by the pandemic.

Below, we set out to explain the UK’s fiscal position. We begin by comparing the UK with other advanced economies, examine why the UK’s debt level may not seem as onerous as suggested by first glance and assess whether the increased levels of expenditure have had the desired effect.

Before delving into the numbers, it is essential to distinguish between the overall level of public debt and the UK’s budget deficit. The UK public debt is the total value of the UK’s outstanding debt pile. The deficit, meanwhile, is the difference between government day to day spending and tax revenue over a fiscal year.

In the first half of this year the UK government spending deficit increased to £150 billion. To put that figure into context, at the height of the Great Recession in 2009, the UK’s annual deficit peaked at £158 billion, as can be seen in Graph 1 below. Meanwhile, the deficit for all of 2020 is estimated at £372bn, more than twice the prior peak. 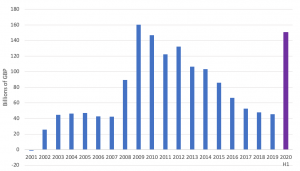 Source: Office for National Statistics, data as of 31st July 2020

By spending more than we earn Government total outstanding stock of debt is growing. The additional spending incurred through the pandemic and beyond will push the overall UK public debt level to its highest level since 1961. You may recall media headlines highlighting that spending is now 100% of Gross Domestic Product. In monetary terms, that equates to a staggering £2 trillion. It is like having a 100% mortgage on your home.

We operate in a relative world

The UK is not alone. Governments of other advanced economies have also committed to providing support to households at least until the end of the year. So how do we stack up in the debt stakes?

The generosity observed in most developed economies comes despite many possessing worse fiscal positions than the UK. Graph 2 below shows the projected debt to GDP ratios of the UK and other G7 countries. Except for Germany, we can see the UK’s debt burden as a proportion of the overall economy is comparatively light.

Graph 2: Projected Debt to GDP ratios of G7 Countries for 2020 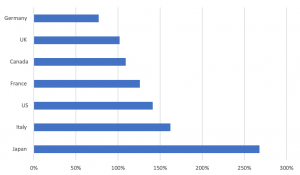 While a lot of focus in the media has been on the amount of debt, less attention has been paid to the cost of debt. The collapse in bond yields means that the UK government can now borrow at extremely cheap rates as Graph 3 shows below. Note that the scale runs from -0.2% to 1%. The figures in the Y-axis show the UK government can borrow short-term loans on negative rates, and for less than 1% for 50 years. 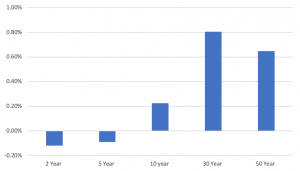 Is the additional spending worthwhile?

So, taking the scale of fiscal support above, the critical question for policymakers at the Treasury and the Chancellor is, has it worked?

Overall, recent UK activity data indicates the support released in to counter the demand destruction wrought by the virus has enabled the economy to rebound from its second-quarter nadir. According to the Office for National Statistics, the economy grew 6.6% in July, building upon the 8.6% growth rate registered in June.

On the same day that the Office for Budget Responsibility announced the total national debt exceeded £2 trillion, two important pieces of data were released confirming improvements:

Graph 4 below displays how UK retail sales volumes rebounded, following sharp contractions as lockdown measures began to bite. The positive momentum, which began in May, was maintained in August, albeit at a slower growth rate of 0.8%. The increase reflects the accelerating reopening rate of many physical retail outlets such as clothing, which increased sales by 13% over the month. Overall, total UK retail sales volumes were 4% higher in August than February.

The latest PMI figures indicate the UK manufacturing sector recorded its most robust monthly growth in factory activity since February 2018, with the index displaying a reading of 55.2, just under expectations of 55.3. The manufacturing resurgence was driven mainly by domestic demand, but new exports also increased for the first time since September 2019, providing a boon to overall UK GDP.

Despite the increasing retail activity, indicators of consumer UK consumer confidence remain fragile. Fears of reduced job opportunities and employment security outweighed increasing optimism over personal finances on an aggregate level, indicating consumers’ spending appetites remain subdued. Getting past this tough patch is vitally essential, and we would not be surprised to see more targeted help from the Government along with them sticking to their commitment on further capital spending projects as part of their promise to level up.

Meanwhile, growth forecasts for the UK economy indicate ongoing improvement. For that we should be grateful.

Large deficits cannot continue forever, but ending support too early poses risks to an economy still battling back from the worst economic shock in living memory

The capacity to borrow to invest at such low rates represents too good an opportunity to pass up. Moreover, failing to build economic infrastructure may reduce the potential growth rate of the economy in years to come.

Tough choices lie ahead, and tax rises and budget cuts are inevitable over the medium term, but reducing support now might represent a more potent danger over the short time.