After months of operating a state of suspended animation, the US election is finally heating up.

The Democratic candidate, Joe Biden, has thus far utilised the public health emergency as a campaigning tactic. Disciplined campaign messaging has focussed on the Trump administration’s inadequate handling of the pandemic and the personal character flaws of the President himself. Few detailed policy announcements have emerged, even though voters head to the polls in just over 50 days.

However, in Michigan on Wednesday the Democratic candidate outlined his vision for reform of the US economy and the steps he intends to take to fulfil his administration’s economic goal if elected. Titled ‘Made in America’, the ultimate goal of the strategy is to increase the number of US manufacturing jobs and the size of manufacturing as a proportion of the US economy.

We analyse the proposals below and assess the potential consequences of a structural reordering of the US economy.

There are thee integral components to ‘Made in America’:

Additionally, an additional 2.8%’ offshoring penalty surtax’ will be applied to the profits of firms who produce goods or services overseas for sale in the US. The plan explicitly mentions call centres as an example of services which could incur the surtax.

Several reforms to the 2017 Republican tax bill are detailed, which according to Biden’s campaign created too many new loopholes.

Biden also pledged to sign six ‘Buy American’ executive orders during his first week in office, if elected. The orders would strengthen existing rules which govern US federal procurement and would increase the requirement to favour American produced goods over foreign equivalents.

One of the most striking elements of Biden’s speech was the detailed, coherent nature of the policies announced. The comprehensiveness of the speech implies meticulously planned strategy to fulfil the aim of the policy.

For Biden, a detailed economic plan is essential. While polls indicate Trump trails the Democratic candidate overall, one area where Trump still has a lead is stewardship of the US economy. The Made in America plan represents an attempt to shift this narrative and paint Biden as a champion of domestically produced industry.

Additionally, the location of the campaign speech is no coincidence. In 2016 Trump penetrated previously impregnable Democratic states across the Mid-West on his way to victory. As part of ‘America First’ promises were made to bring back manufacturing jobs from China and other countries, tapping into the anxiety of voters wary of globalisation in previously vibrant industrial centres across the Rustbelt.

Graph 1: Distribution of US workforce across Economic Sectors, 2009 until 2019 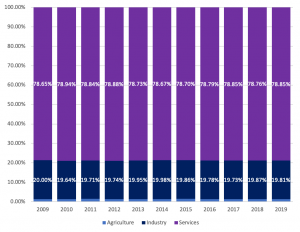 Source: United States Bureau of Labor Statistics, data as of the 31st December 2019

Overall, Biden is attempting to steal Trump’s clothes and beat the President at his own game. While the candidates share a common desire to bolster US manufacturing (and capture the same voters), Biden’s strategy is materially different from the Trumpian method of increasing tariffs. To summarise:

Increasing corporate tax rates in a globalised economy impedes the competitiveness of US companies, especially if the proposed tax rate 28% will be higher than most other industrialised economies.

Source: Organisation for Economic Cooperation and Development, data as of 31st December 2019

While some incentives are present in the plan, the considerable rise in corporate tax would ensure the net overall effect is limited.

It seems to us, punishing US firms with global operations through higher economic costs, including taxes and tariffs, is not a sound method of pursuing a narrow policy objective.

Moreover, policymakers cannot divorce their national economies from global economic forces and attempting to do so merely creates higher costs for consumers. Graph 1 above suggests as much. Despite a costly trade war with China, the level of US manufacturing jobs remained consistent from 2016 – 2020 and invited retaliation, which impacted US producers in other parts of the US economy.

Furthermore, it is questionable whether onshoring manufacturing to the US, to benefit small population centres, is even desirable. Often voters struggle with the idea that while the small costs associated with Free Trade are localised, the economic gains, while dispersed, are much greater.

Biden is now taking the fight to Trump for the Presidency.

It is game on; campaigning and policy pledges are accelerating.

Both candidates are pursuing an inward-looking, tactical agenda, for political gain at the expense of the overall health of the US economy.