The Evolution of Cryptocurrencies – CBDC’s

Home Our BlogThe Evolution of Cryptocurrencies – CBDC’s
Share this page

Bitcoin and cryptocurrencies continue making headlines. But, behind the headlines major Central Banks are considering the role digital currencies may have in what could be a transformational shift.

Today, over 10,000 cryptocurrencies exist in the marketplace, with hundreds more joining every month. Most have been subject to staggering levels of volatility – the cost of a single Bitcoin recently skyrocketing over $60,000 in March and subsequently plummeting to below $35,000 in June. This type of volatile reaction is what happens in an unregulated environment where a single tweet can unsettle the entire crypto market. 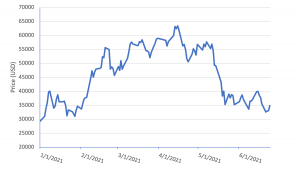 For simple day to day use something less volatile and more regulated is required to avoid roller coaster influences which render cryptocurrencies difficult to integrate into mainstream monetary systems.
As we explain below a great deal of thought has been taking place into how Central Bank Digital Currencies (CBDC’s) might be issued to complement existing systems.

In June, El Salvador’s congress voted to approve Bitcoin as legal tender. Citing the benefits of the low transaction costs, with 20% of the country’s GDP comprised of remittances and money sent home from citizens working abroad.  However, last week The World Bank rejected a request from El Salvador for help implementing this rather unusual policy shift. They expressed concerns with “environmental and transparency shortcomings”. Demonstrating the significant barriers at the earliest of stages.

However, in a more mainstream development, The Bank of England announced the creation of a taskforce to explore the potential of a UK Central Bank Digital Currency. Nicknamed “Britcoin” this digital currency would essentially complement our current monetary system, allowing the British public the benefits of owning a digital currency backed by the stability of the pound.

All central banks considering digital currencies will have some ability to control the market value of their CBDC’s, by keeping them in line with their home currencies. This is a marked shift from the volatile cryptos, but there are some inherent ethical and practical challenges associated with the implementation of CBDC’s:

What Would a CBDC Mean for You?

It is impossible for central banks to ignore the opportunities presented with digital currencies. The Bank of England, European Central Bank, Peoples Bank of China and the US Federal Reserve Bank are all currently researching technologies to integrate digital currencies across their monetary systems.

The risks presented are not being taken lightly by central banks. Issues associated with privacy, hacking and crime will have to be resolved satisfactorily or the idea will be doomed to failure.

Private companies already have wide access to personal transaction data which can be used to influence behaviour. This will be extended big time to governments unless digital currencies are demonstrated to be kept separate from state snooping. This is likely to be more of an issue for Western governments to confront than for centralised states like China.