The annual Jackson Hole Economic Policy Symposium represents one of the most significant events in the economic calendar. Held at Jackson Hole in the state of Wyoming, famous for big prairies and rugged landscape, this year’s symposium was conducted online.

In his speech setting out the economic realities, Chairman of the US Federal Reserve (the Fed) Jerome Powell signalled a generational change to the conduct of mandated policy.

We describe this in detail later, but first some background explaining why the need for change is pressing.

The Federal Reserve operates a dual mandate; the maintenance of price stability and maximum sustainable employment.

Price stability is maintained by targeting the rate of inflation at 2%, a level considered low enough to escape the notice of consumers, but high enough to support growth; a ‘goldilocks’ level.

However, over the last decade US inflation levels have consistently undershot the Fed’s 2% target. This is depicted in Graph 1 by the orange line measured by the scale on the right y axis. In 2015 inflation dropped as low as 0.10%. When it has moved above 2% the occasions have been short in duration.

The low inflation experienced by many advanced economies in the prior decade is further puzzling because it coincided with falling unemployment. This latter variable is depicted by the purple line and is measured on the left y axis.  Theoretically, low unemployment is expected to push inflation up because labour, when in short supply, tends to lead to higher wages and increased prices of goods. The relationship between these two variables is known as the Phillips Curve. It has influenced monetary policy for a very long time, but the relationship has clearly broken down. 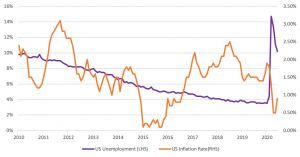 Why does an inflation undershoot matter?

In other words when expectations of future inflation fall too low, they appear to inhibit spending and thus economic growth. Even worse is the prospect of deflationary expectations. Falling prices lead consumers and business to forgo purchases in the hope of obtaining lower prices later.

These considerations are currently critically important for policymakers dealing with a pandemic shook economy. The global demand shock experienced has materially affected the economic outlook which was already in the grip of low inflation expectations. Furthermore, interest rates are already zero bound and less effective as a policy tool.

On the Thursday Powell announced an evolution to the Fed’s mandated policy. Inflation targeting. This represents a new interpretation of the Fed’s price stability goal contained in its mandate.

The shift announced last Thursday is subtle, but the intention to tolerate higher inflation breaks twenty-five years of inflation targeting. This is ground-breaking.

What are the possible implications?

For the Fed to actively seek higher inflation is counter intuitive. In fact, they spent many years battling the ‘Great’ Inflation; which hit 14% in early 1980.  In the so-called Volker years (1979 – 1987), a significant shift in policy also occurred. Switching from interest rate targeting to money supply targeting. This laid the groundwork for a significant period of economic expansion while also driving inflation lower.

The moves by Powell toward average inflation monitoring, thus accommodating periods of higher inflation, is motivated by a need to create employment to fuel growth. This is essential at a difficult time with millions of jobs at stake.

The US labour market is in a state of flux. The old policy is guided by a requirement to tighten policy based on how far employment is beneath its maximum sustainable level. The Fed’s view is that returning to a strong job market in the post pandemic phase is essential for spending and growth. They do not want to be compelled to raise interest rates prematurely should inflation tick up unexpectedly.

They also recognise the relationship represented by the Philips curve is no longer as steadfast as in the past. The greater risk posed to the US economy is potentially a disinflationary one. If a return to low unemployment is the goal, the perceived associated risk of runaway inflation from a tight labour market must be set aside. Their judgement is that risks of uncontrolled inflation appear low for the immediate term whereas the risks to growth and spending are high.

By making their intentions clear Powell has let it be known that accommodative monetary policy will persist for as long as Fed members deem it necessary to support economic growth. Considering the most recent data measured US inflation at under 1%, US interest rates are likely to remain near zero for some time.

The move to variable average inflation targeting is partly reflective of the present difficult macro-economic environment and the immediate negative impacts created by Covid-19.

Policymakers are reflecting on established practices realising it is better to change tack than stick with existing practices that are ineffective.

The Fed are stipulating that interest rates will stay low even if inflation picks up and remains high for a longish period. This subtle but generational shift will help the US economy during the recovery phase, avoiding having to raise interest rates prematurely.