Cast your mind back to December 2018 and the Federal Reserve, the US’ Central Bank, had raised interest rates by nine 0.25% increments since December 2015. Despite increasing criticism from President Trump, the Fed were determined to continue their rate trajectory in order to achieve the ‘neutral rate’, the level at which GDP growth is neither hampered nor accelerated, and act pre-emptively to cool an over-heating economy. However, this initiative proved to be short-lived in the face of a sell-off in global equity markets and by January, to the surprise of many investors, the Fed announced that they would be halting further rate rises (as illustrated in Chart 1), instead transitioning to a ‘data-dependent mode’.

Now, you may ask yourself why interest rates have such an influential role in the state of the economy. Simply put, they indirectly impact both economic growth and the price of goods and services. This is done by directly impacting the cost of financing both consumption and production through an increased cost of credit whilst also encouraging consumers to save rather than spend. Because of this, interest rates are a key monetary tool used to raise, or lower, inflation levels in order to keep them from spiralling in either direction.

With such a material influence, it’s hardly surprising that earlier this week investors waited with bated breath as the Fed met once again to discuss the path of interest rates going forward. Concerns of higher rates were heightened by figures showing the US economy expanding at an annualised rate of 3.2% (portrayed in chart 2). This was in defiance of expectations forecasting growth to be as low as 2.3% following a shaky start to the year. Although this data alleviated investor fears that the US may be heading toward a recession, it also sparked debate on whether it could once-again indicate an over-heating economy.

To the relief of many, the Fed announced that they would maintain the current rate of 2.25% to 2.50%. The rationale for this centred around the fact that despite the US being on track for its longest-ever expansion, year-on-year inflation, as reported in March, was sluggish and remained stubbornly below the Fed’s 2% target at 1.6%.

Debate continues amongst economists as to why inflation is remaining at this level despite continued pressure from falling unemployment and increasing wage growth. While Jay Powell, Chairman of the Central Bank, stated the current level of price growth could prove fleeting due to ‘one-off factors’, many others are questioning whether the US, may in fact, need a rate reduction. Non-so vocal as President Trump. 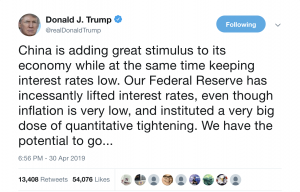 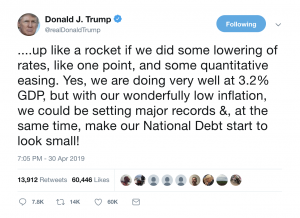 However, the Fed must walk a very fine line. If they openly discuss rate reductions, then they run the risk of signalling that the economy is weak, so spooking investors. If they talk up the economy too much it signals that higher rates may be on the cards, which, again, would unsettle the markets.

Ultimately, despite unprecedented public lobbying and criticism from President Trump, the Fed have maintained their patient, independent stance, arguing that with a strong labour market and continued economic growth, inflation should return to their 2% target.