The First Change to the Fed’s Tune

This week, the US Federal Reserve’s Open Market Committee (FOMC) met to agree on their key monetary policies. It is an opportunity to provide updated guidance on economic forecasts for the coming years.

Interest rates and asset purchasing programmes were held at their current levels of 0-0.25% and $120bn per month respectively, but the accompanying commentary contained a slight shift in emphasis.

Below we look at the key details, how the market has reacted, and possible implications ahead.

The US Federal Reserve Bank (Fed) has two key goals, referred to as their ‘Dual Mandate’

The more prescriptive framework we have today evolved from an undeclared target to generate inflation of 2%, to a declared one. Moreover, and more recently, Fed Chairman Jerome Powell introduced Flexible Average Inflation Targeting (FAIT). This is a target to deliver an average of 2% inflation over the long-term; but without stating the period this is measured over.

Previous attempts to stimulate inflation have not been successful but fast forward to this year and with the peak of the pandemic now behind the US, the inflation situation has changed. Economies are reopening and inflation has risen sharply, exacerbated by the so-called base effect that we have written about extensively – see inflation chart. 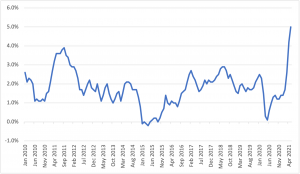 The shift up in inflation we are now witnessing was anticipated by bond market participants, with US 10-Year Treasury yields (shown below) increasing from 0.91% at the end of 2020 to 1.74% at the end of March 2021. The debate today about whether the rise in inflation is transitory has been the subject of much angst. 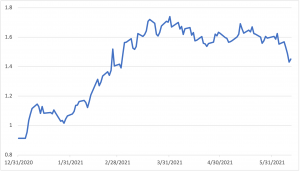 However, despite worrying about inflation that may lie ahead, the market has taken the Fed’s word that inflation will fall back. We can state this with conviction because US Treasury yields have declined since the highs experienced late March.

Further evidence for market acceptance of higher inflation in the near term occurred just last week when the US inflation print came in at a whopping 5%, and yet US 10 year Government bond yields finished the day lower than where they started.

Participants have accepted (for now) that the spike in inflation is transitory and coming from a low base after the economy was shut down at the same time last year.

This brings us neatly to this week’s FOMC meeting and acceptance of the Fed’s view that inflation is transitory. This accommodation by bond investors appears to have given the Fed confidence to speak more pointedly about their interest rate intentions for the first time since the pandemic began.

Powell said in his press conference that this month’s meeting should be thought of as the one in which the committee started to talk about talking about tapering their asset purchasing (reducing the rate at which they purchase bonds which in turn presses down on yields).

They also brought forward their view as to when interest rates will need to rise. This was accompanied by updated economic forecasts, providing more evidence of the strength of the economic recovery in the US and a hint that inflation will settle a little higher and close to their target after the spike up:

As far as interest rates are concerned, the Fed dot plot was also updated. March’s plot is shown on the left vs this month on the right. In simple terms, each dot represents a committee member’s view of where interest rates should be at the end of a given year.

Based on the average (the median) the Fed are indicating two interest rate hikes in 2023, whereas 3 months ago in March the forecast was for no hikes until 2024 at the earliest. This is a shift of emphasis and in many ways, it is good news for all of us.

How Has the Market Reacted?

Talk of tapering and earlier rate rises was always likely to cause a stir in market prices. The US Dollar enjoyed its best single day in more than a year, against a basket of 10 other currencies.

Whenever markets experience volatility investors favour safety, which benefits the Greenback (the US Dollar).

But the big moves of the day came in the bond market. US Treasuries sold off, sending yields higher. The most impacted area of the forward curve was the 5-Year term, where yields increased by 10 basis points on the day.

Anticipating the possibility that his update might spook investors, Powell was quick to downplay the importance of the dot plots during his press conference on Wednesday. He emphasised that they are individual projections and that no discussions of when it was appropriate to raise rates had yet taken place. 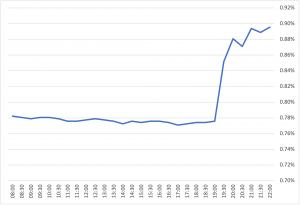