The North East Charges up for Its First Gigaplant

Back in November a road map for “a Green Industrial Revolution” was revealed by the UK government. A 10-point plan for £12 billion worth of investment in infrastructure, covering energy systems, transportation and conservation is powering change.

One key aspect of the plan is the highly ambitious target on electric vehicle (EV) sales. The government announced they will end the sale of new petrol and diesel cars and vans by 2030, ten years earlier than initially planned. Hybrid vehicles which meet low carbon emission thresholds are to be given a longer window through to 2035.

Incentives are already available for consumers to purchase electric plug-in vehicles. They include a grant of up to £2,500 towards a new vehicle costing up to £35,000; a pricing level the government believes captures 50% of electric cars on sale in the UK today (rules applicable from 18th March 2021).

Undoubtedly, awareness of the need to protect the environment has grown over the years, and consumer habits are changing. This extends to electric vehicles. For example, UK new car registrations for March 2021 show battery EV’s almost doubling; 7.7% of all vehicles registered versus 4.6% the previous year. Whilst the majority (60%) of new vehicle sales continue to be traditional Diesel and Petrol, we are seeing a marked shift in the ratio, (see table 1 below for more detail). With government backing, this trend can only go one way – UP!

The challenge now is to develop the infrastructure required to speed up the transition. Significant investment is needed to build supply chains which can meet these demands. An example is US based Tesla. The company is making great strides in EV’s in the US and in Asia. They are also in the process of building a facility in Europe (Berlin), producing battery cells and vehicles side by side to meet growing demand: Tesla are committed to maintain local control of supply chains to minimise transportation of the heavy cells.

In the UK a big shift is also underway. To maintain competitiveness in the international car manufacturing market, the UK is ‘tooling up’. BritishVolt, a producer of lithium-ion batteries, is planning to build the world’s cleanest, greenest, battery making facility. In addition to making batteries for existing UK car manufactures, availability of such a key component may also attract new manufactures to the UK.

The facility, known as a Gigaplant, will be on True Potential’s doorstep. The factory will be sited on the North East coastline, in Blyth, and not far from the home of one of the most successful electric vehicles in terms of global sales, the Nissan Leaf, demonstrated in the chart below. 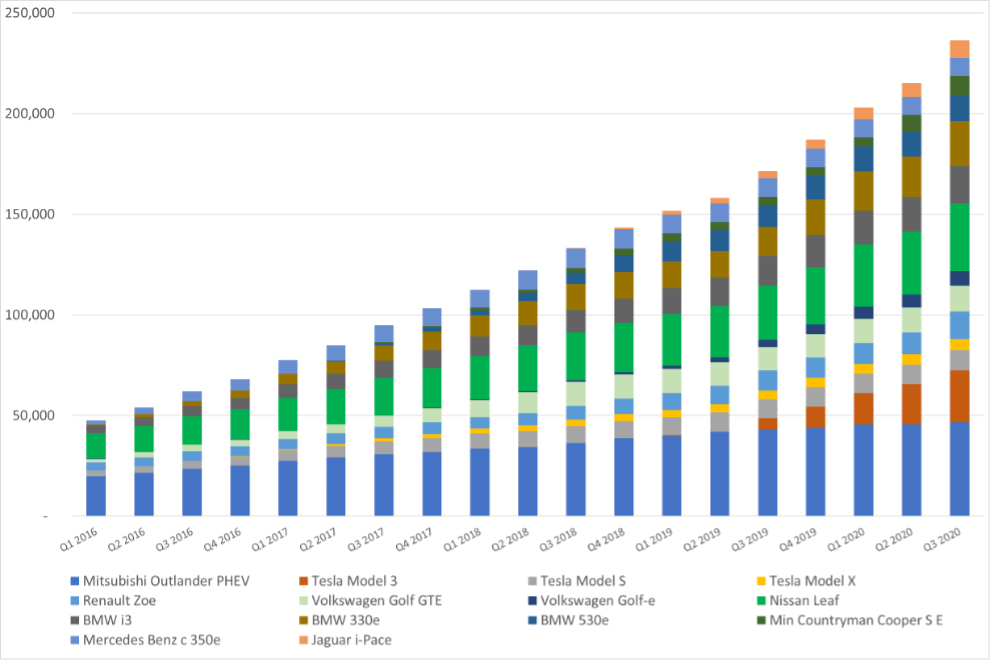 Why the North East of England?

Work on the Gigaplant is planned to begin this summer and expected to be up and running by 2023. It will create up to 3,000 jobs within the first four years of operations.

Supporting infrastructure, through transportation and logistics services will also benefit from the project with planners suggesting a further 5,000 jobs in the supply chain.

Though the company plans were made public in December last year, the firm has made the headlines again this week as it seeks funding to finance the £2.6 billion investment project.

Part of the financial capital needed will be provided through government grants. One billion pounds has been allocated to support UK giga-factories, but BritishVolt will not be the beneficiary of the full pot. The government is eager to broaden out its capital investment to attract even more firms to begin manufacturing in the UK.

To make up any shortfall in government funding BritishVolt is contemplating issuing shares through a Special Purpose Acquisition Vehicle (SPAC). SPAC’s are shell companies that allow early phase firms to raise capital without going down the traditional Initial Public Offering (IPO) route which involves lots of scrutiny possibly hindering progress.

The UK has struggled to attract international investment to support battery technology. BritishVolt is a positive step change in this regard, and at the same time helping the UK attain its green revolution goal to bring sales of carbon emitting vehicles to an end.