The global digital revolution is truly amazing. It is increasingly powering economic development and growth. The key component making this happen is microchips. Since their invention in 1958 the number of devices using microchips has grown substantially. As a result, a trillion microchips are made each year. This is equivalent to 128 chips for every person on the planet. The below graph highlights the rapid growth in sales of microchips globally, with growth expected to reach 8.4% in 2021. 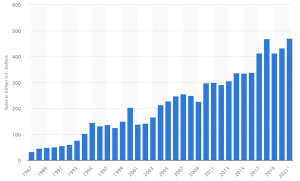 Predictions that demand will slow look certain to be challenged, with innovation in areas such as photonics and nanotechnology showing great promise. However, one question being asked is can supply keep up with new demand?

To answer this key question, we explore the dynamics presently affecting the marketplace below.

Fierce competition has driven the design of increasingly sophisticated semiconductors and with huge sums required to stay ahead of the game a small number of winners have emerged; Intel (US), Samsung (South Korea) and Taiwan Semiconductor Manufacturing Co (TSMC). TSMC is the world’s largest foundry and go-to producer of chips for Apple’s iPhone, artificial intelligence (AI) and chips used in high-performance computing.

The global pandemic has also played an interesting role. When it took hold early last year car manufacturers initially cut their requirements for semiconductors, but as demand returned, they had to restock quickly. This sudden demand surge created a huge shortage for car manufactures because bigger clients such as Apple and HP (laptops and printers) experiencing increased demand claimed priority. Consequently, policymakers in Europe stepped in to encourage the likes of TSMC to unblock the bottleneck confronting their hugely important auto-industry.

It is not just the car industry facing up to challenges. Different problems are emerging in different ways across the microprocessor industry. For example, the US is now lagging in this key area, with Intel, their industry champion, having to increasingly outsource production. This is unwelcome news and alarm bells are probably ringing in the corridors of the greatest capitalist nation in the world.

East Asian companies are emerging as the main winners and China is playing catch up; with a $100bn subsidy pot available to China’s 50,000 chip related businesses. Moreover, $2.2bn is being made available for SMIC (Semiconductor Manufacturing International Corporation), the country’s industry leader to build a new factory. China expects to be 70% self-sufficient in chip production by 2025. An incredible feat when one considers that China imported $304bn worth of semiconductors last year. This is greater than the value of oil imported by China, and more than its total imports from its largest trading partner, the European Union.

Chinese policymakers recognise that being dependent on a handful of foreign chip makers is unwise, especially if supply constraints emerge, representing a barrier to achieving their ambitious growth target for the next 5 years. China’s 14th Five Year Plan (2021-25) sets out key social and economic objectives and one of the key elements is building autonomous technologies heavily reliant on microchips.  Ironically, tightening of restrictions on US tech exports may have accelerated China’s journey to semi-conductor self-sufficiency. Chinese officials are aware that the Biden administration is just as vocal on China’s unfair practices as Trump. They note that the direction of policy towards them is the same as that pursued by Trump, it is just the rhetoric and tone that is different.

So where does this leave us today?

In the short-term consolidation amongst suppliers of microchips is now, arguably, restraining competition and potentially supply. This situation doesn’t look as if it can be remedied anytime soon because consolidation has created high barriers to entry. This puts incumbents in a strong position to fend off any new competitors.

With global supply chains also in disarray, fractured by trade disputes and the global pandemic, upward pressure on prices is growing. This could feed into the cost of finished goods, producing inflation, but it is too early to tell if this is a temporary phenomenon or the start of a longer-term trend. The larger industry players may decide to fight for market share driving prices lower over time, a positive for consumers.

An additional concern is shortage of chips may hinder production of goods, leading to a loss of revenue in 2021. This will impact differently by region. Until they catch up and become self-reliant Chinese businesses will be the biggest losers from supply shortfalls, followed by the EU.

Where do we go from here?

One of the truly remarkable things about capitalism is the challenges we face create opportunities. Problems are there to be solved.

If higher chip prices emerge, further investment will be encouraged. This will in turn lead to a ramping of production. Ramping of production will generate revenues and profits which will be reinvested into the new emerging technologies, which rely on ever more sophisticated microprocessors.

In some ways the situation today is like the early era of the internet. So much of what has emerged now and shapes our lives was in its infancy a mere 20 years ago.