We are delighted to have won the European Public Vote award at the 2017/18 European Business Awards in Warsaw, Poland.

This year’s award is especially satisfying as it relied on a public vote. Having earned thousands of votes from happy customers, we are pleased to see that we are on the right track in our aim to help people do more with their money.

Neil Johnson, Senior Partner at True Potential, accepted the award. “It is a great thing, when you think of the number of companies competing, and we put a huge amount of effort in to the video, and to then get that level of recognition and support, it is fantastic. To win a public vote is always a great thing.” 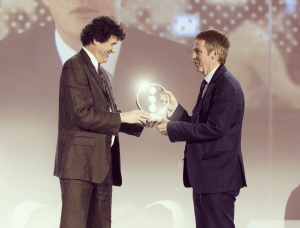 “It has been a huge thing for our business over the last twelve months since we won last year. I think for our credentials and just the involvement with the whole awards process, it has been fantastic.”

You can learn more about our business and the European Business Awards by watching our video entry to the event.