Home Our BlogTrump the trade sheriff
Share this page

Since imposing taxes on imported solar equipment and washing machines, Trump, the ‘trade sheriff’, is now shooting at industrial metals. His aim is to rectify the country’s spiralling trade deficit and put America’s interests first.

The announcement from the Trump administration to impose steel and aluminium tariffs (25% and 10% respectively) has made investors anxious. A full-scale trade war may be on the horizon but there is still a lot of posturing to take place before the various players determine exactly what is in their national interests. In terms of making judgements on how this will evolve, equity investors have not over reacted. Market movements have been benign with the S&P 500 barely changing since the start of the month.

The new tariffs that have been formally adopted on Thursday are mainly aimed at the largest steel producer in the world China, which has been flooding global markets with cheap metals. China has excess capacity and is able to export at prices that domestic suppliers cannot possibly match.

Economic theory suggests tariffs placed on imported goods should put their prices up and so stimulate demand for domestically produced goods. Domestic prices will be pushed up slightly and the quantity supplied domestically will increase causing changes to ripple through the various supply chains.

Consequently, domestic producers and the government gain from higher production and higher tax revenues but foreign exporters and domestic consumers lose out. The general outcome is higher prices within the economy applying the tariffs.

The tariffs imposed will knock-on to trading partners of the US, with net exports and gross domestic product suffering. Unfortunately, if gross domestic product growth deteriorates in any country because of tariffs it seems reasonable to suggest that they will be compelled to retaliate. This is how the shooting starts. The likelihood is that there will be few winners in a full-blown trade war. However, Trump is betting that with a huge trade deficit already in place, and deteriorating by the minute, the US will be a relative winner. 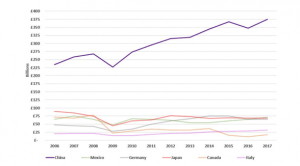 Trump is betting that the new North American Free Trade Agreement involving the United States, Mexico and Canada, signed before he was President, can be renegotiated on better terms and will subsequently exclude Mexico and Canada from the imposed tariffs. It is worth noting that Canada is the largest aluminium supplier to the US. In addition, the US will also create a process for countries with close security relationships with the US to seek exceptions.

Competition is healthy. It promotes innovation, lower prices and higher consumption. However, in countries where labour is cheap and material sources abundant the greater competitive advantages they confer have become more apparent as trade between developed and developing countries has increased. The net result is massive trade imbalances. Arguments in support of their continued existence have become more convoluted. For example, it is argued that if China can run a large trade surplus they are helping the US because they are able to recycle their surpluses through purchases of US government bonds.

It seems the ‘you buy our bonds and we will buy your goods’ game has run its course. Trump’s objective is clear – support US domestic producers and ‘make America great again’. Quite how this is accomplished without destabilising global trading relationships is open to question. Counter parties have their own domestic vested interests to protect and they will be gauging their responses based on the potential for the spat to escalate out of control.

Trump is doing what he does best and that is antagonising for a solution to a problem of a growing a US trade deficit with their major trading partners. The solution is to stop it growing larger and somehow it needs to be turned around.